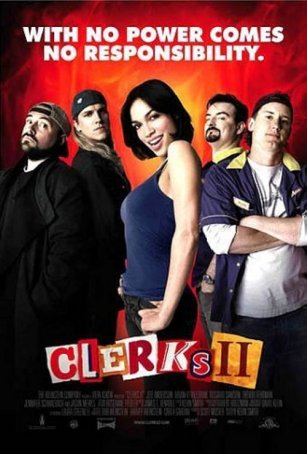 The passage of time has not been kind to the filmography of Kevin Smith. Most of his movies have a “stuck in amber” quality that makes them most interesting as a reflection of the era in which they were made. His two best efforts, Clerks and Chasing Amy, remain entertaining but the rest of his oeuvre has lost whatever luster it might once have had. I count Clerks II among those diminished productions. Although I found it to be enjoyable in 2006, a revisitation 16 years later hasn’t produced the same reaction. The faults are magnified and the positive qualities are lessened.

Kevin Smith made Clerks II a dozen years after the release of the original catapulted him from an unknown New Jersey filmmaker into the international spotlight. By the mid-2000s, he was trying to grow behind the lens and the Clerks sequel offered him a dual opportunity: to recapture disaffected fans by bringing back his most beloved characters and show his critics that he could blend his signature scatological/profane comedy with heartfelt, emotionally relatable elements. Asked in 2006 if he had succeeded, I would have said yes. In 2022, I’m not inclined to be so generous.

One of the biggest problems with Clerks II is that almost none of the humor works (excepting a couple of slapstick gags). Whether it’s the bestiality material (which has an overtly homophobic undercurrent) or the “you never go ass-to-mouth” refrain, the most supposedly edgy material in Clerks II comes across as crass, naïve, and/or dated. Smith’s few attempts at pop culture commentary (mostly focused on The Lord of the Rings and Transformers) are shallow and unfunny. Although he captures the vulgarity of Clerks, he misses everything that made the first film successful – finding the humor in the everyday grind of a minimum wage-earner. The most disappointing thing about Clerks II is waiting for the BIG JOKES that never arrive. (To be fair, the musical number, done to the Jackson Five’s “ABC”, shows potential. It’s not Lin Manuel Miranda but the choreography and camera work are solid.) 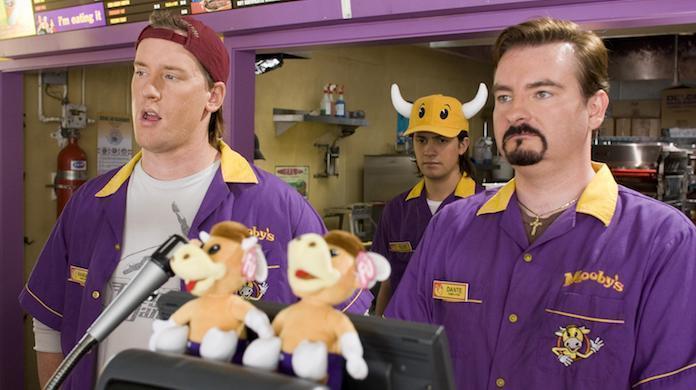 Clerks II picks up a number of years after the end of the first film with the destruction of the Quick Stop convenience store in a blaze. Jobless (and seeking to avoid being homeless), longtime best friends Dante (Brian O'Halloran) and Randal (Jeff Anderson) have been forced to switch their talents to serving burgers at the local fast-food joint Mooby’s. Also migrating with Dante and Randal are Jay (Jason Mewes) and Silent Bob (Smith), who continue their drug-fueled antics in a new location.

Dante’s life has become more complicated of late. He is engaged to a former high school hottie, Emma (Smith’s wife, Jennifer Schwalbach), who wants them to shake the New Jersey dust from their sneakers and move to Florida. Emma’s chief attribute is that she comes from money and marrying her would immediately solve any financial woes besetting Dante. The problem is, he doesn’t love her. Instead, he has fallen for his boss, Becky (Rosario Dawson). The two have enjoyed a one-night stand but Becky doesn’t believe in romantic love, leaving Dante stuck in the friend zone. 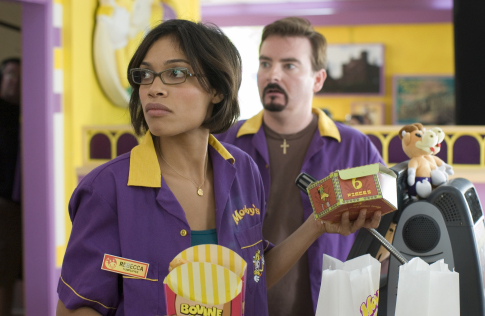 Clerks II chronicles Dante’s final day in New Jersey, with an emphasis on his interactions with Randal, Becky, and the other Mooby’s employee, the fundamentalist Christian/Lord of the Rings fanatic Elias (Trevor Fehrman). The film’s first hour seems like a desperate attempt to recapture the things that made Clerks compulsively watchable. It’s only during the final 30 minutes that Smith branches out, including in a heated jailhouse heart-to-heart between Dante and Randal that gets to the core of Smith’s message. With this screenplay, Smith set out to say something, unlike in Clerks, of which he once said: “There's no message, at least not one I consciously put in there. It's just a bunch of dirty jokes.”

Had the acting been better, the emotional payoff would have carried more weight. It’s predictably mediocre at best, with one exception. Smith was committed to bringing back the original cast, including Brian O'Halloran, Jeff Anderson, and a rehabbed Jason Mewes. It's no surprise that these guys have essentially played these parts (and no others) since they appeared in Clerks. They were amateurs when Smith first recruited them and their thespian skills have not been honed during the intervening years. O'Halloran's forced, rushed delivery of certain lines robs them of rhythm and believability. Jennifer Schwalbach, Smith's wife, plays a two-dimensional caricature shrew. The aforementioned exception is Rosario Dawson, who imbues Becky with passion and humanity. Dawson is so much better than anyone else in the cast that her presence in the film accentuates their deficiencies. Had someone less accomplished gotten the role, perhaps O'Halloran's stiffness wouldn't have been as obvious. 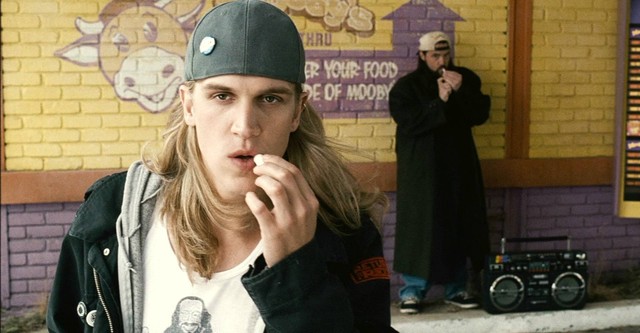 Clerks II feels like an unwelcome, unnecessary appendage to Clerks, which was never intended as more than a one-off (in Smith’s original cut, Dante was killed at the end during a robbery). It spawned the so-called “View Askew universe,” which allowed certain character (Jay and Silent Bob in particular) to cross over but this is the first true sequel. As of this writing, Clerks III has been filmed but not yet released; one wonders whether Smith’s attachment to these characters is stronger and more enduring than the audience’s.

Aspects of the production that were only mildly disturbing in 2006 have become untenable 16 years later due in part to shifting cultural norms. Homophobic and misogynistic undercurrents (which were occasionally noted by some critics at the time of the movie’s release) are more obvious now than they were during the George W. Bush years. Homosexuality is seen as a character flaw and conflated with bestiality for supposedly humorous purposes. When Dante and Randal express their love for one another, it comes with the spoken understanding that their feelings are purely platonic. When Chasing Amy was released in 1997, one of Smith’s stated goals was to push back against the anti-gay charges leveled at him following Clerks and Mallrats. Any advances evident in that film have been erased by Clerks II.

When I wrote my contemporaneous review of Clerks II in 2006, I concluded that, although the movie was flawed, it had enough “heart” to overcome its deficiencies in tickling the funny bone. That’s not my updated opinion. Smith’s humor no longer feels outrageous or organic and, devoid of laughter, there’s not a lot to like about most of the characters who work and live in and around Smith’s New Jersey.