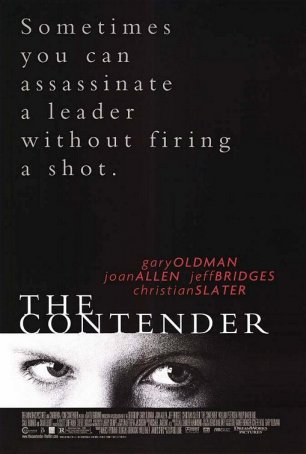 For his sophomore effort, filmmaker Rod Lurie turned his attention to the Oval Office. The Contender, a low-key political thriller that relies primarily on character interaction to develop tension, is a close cousin to Lurie's debut cinematic endeavor, Deterrence. However, despite a much larger budget, the writer/director wisely chose to limit the scope of The Contender to the domestic arena (Deterrence featured a game of nuclear chicken between the United States and Iraq). This allows for a better focused story with more compelling characters.

While the term "contender" has a number of meanings, it is most commonly associated with boxing. Contenders dance across the canvas, often broken and bleeding, but never bowing out until they have been pummeled into senselessness. By calling this film, about the confirmation hearings of a Vice President Designate, The Contender, Lurie has highlighted the metaphor linking the brutality of the boxing ring with the equally uncompromising and bloody battles that take place in politics. Although the winners rarely escape unscathed, the losers often emerge with their lives and careers in tatters. And, if Lurie's view of American politics is cynical, it's certainly not more so than that of the average voter.

The story opens several weeks after the death of the Vice President. President Jackson Evans (Jeff Bridges) has narrowed his selection of candidates to a short list. The party favorite is up-and-coming Democratic star, Jack Hathaway (William Petersen), the popular governor of Virginia. Evans, however, is pursuing his own agenda. Midway through his second term, he is in search of a means to secure his legacy, and he believes that putting a woman in the Vice President's position is unique enough to earn him a spot in the history books. So, bucking the advice of even his key advisors, he names Ohio Senator Laine Hanson (Joan Allen) as his choice. However, his hopes for smooth sailing run afoul of Congressman Sheldon Runyon (Gary Oldman), the Republican chairman of the confirmation hearings. Runyon wants Hathaway, and will stop at nothing to derail Hanson's chances, including dredging up a 25-year old sex scandal. Hanson finds herself embroiled in a battle where she is hampered by her own high ethical standards while her opponents have no such handicaps. 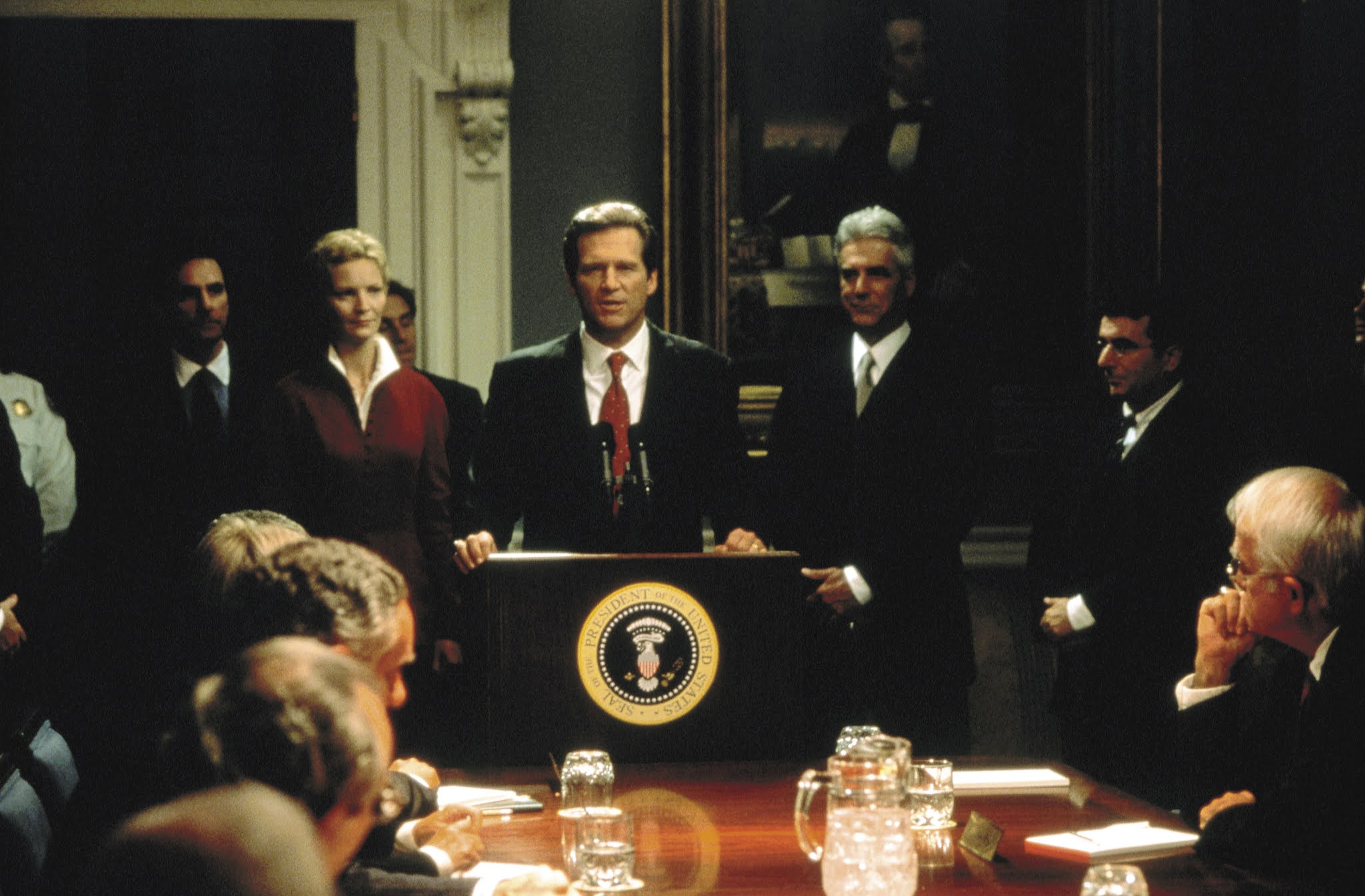 For most of its running length, The Contender offers a fairly straightforward account of the moves and counter-moves made by Runyon and Evans as they maneuver against one another. For either of them, a defeat means absorbing a political blow, but for Hanson, the pawn in the middle, everything is at stake – her credibility, her reputation, and her future. As in Deterrence, where the struggle between Iraq and the United States played out as a mixture of chess and poker, The Contender turns Hanson's confirmation process into a high-stakes game of strategy, where there are no rules. Runyon, motivated as much by petty personal reasons as by party politics, is willing to get down and dirty, slinging mud at will and knowing that some of it will stick. Hanson, however, tries to take the high road – a path that becomes increasingly difficult to follow. She is not naïve, but she will not give up her principles, even when presented with a potential weapon. In the end, The Contender asks a key question: can someone with a moral code survive in the national political forum?

I don't know any more about the internal workings of Washington than the average American, and my perception of the political process is based on what I see on television, read in the papers, and witness in documentaries. Consequently, I have no way of determining how accurate Lurie's depiction of things is. The veiled threats, backroom deals, and cold-blooded maneuvering may represent a Machiavellian fantasy, or it may strike true. Ultimately, it doesn't really matter, because, regardless of the reality, I had no difficulty accepting Lurie's presentation as seeming genuine. 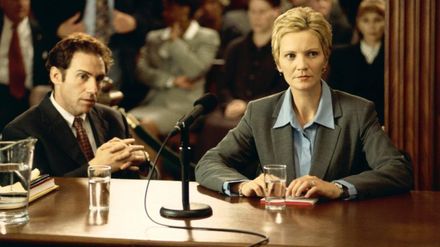 Lurie garners strong performances from his three leads. Jeff Bridges brings an edge to the President. He's the consummate professional politician - cultured and charismatic in public, yet stubborn and short-tempered in private. He is motivated by pragmatism, not idealism (an uncommon characteristic for a motion picture Commander-in-Chief). Meanwhile, Joan Allen gets the opportunity to take center stage after a career comprised primarily of high-profile supporting performances. Her interpretation of Hanson is perfectly modulated, easily drawing us into her corner. Finally, there's Gary Oldman, who is almost unrecognizable behind his oversized spectacles. Emulating Senator Arlen Spector, Oldman's Runyon represents a flawless portrait of the hard-line, old-time politician who believes in winning at all costs. Yet, because Oldman captures the core of Runyon's humanity, the character never comes across as a stock villain. Key supporting work comes from the always-reliable Sam Elliot as Evans' right-hand man, William Petersen as the Clinton-like second choice for VP, and Christian Slater as a Delaware congressman who becomes Runyon's attack dog. 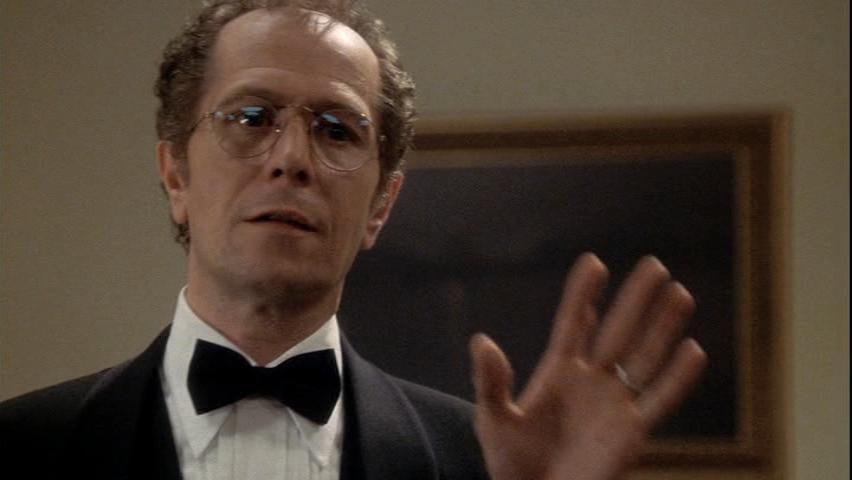 The Contender is not without hiccups. A subplot featuring a female FBI agent is clumsily grafted onto the main story. Although it serves a purpose – to soften the deus ex machina aspect of a key twist – Lurie never integrates it seamlessly into The Contender's fabric. As a result, it remains an appendage. Additionally, the way everything is wrapped up into a nice, neat package seems a little too convenient. As in Deterrence, a surprise development allows the President to neatly sidestep making a difficult decision. Finally, while I'm not a big fan of using grandstanding speeches to offer a catharsis, at least in this case the speech fits the circumstances and is delivered in a suitably convincing manner.

While Deterrence showcased Lurie's potential as a filmmaker, The Contender became the vehicle in which he began to cultivate that promise. Taken as a whole, this movie represented a major step forward for the director at the start of a career that continues today.