Girl with the Dragon Tattoo, The (Sweden/Denmark/Germany/Norway, 2009) 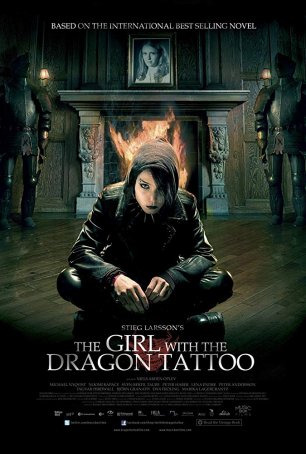 The Girl with the Dragon Tattoo belongs to a rare genre: the literate motion picture murder mystery/thriller. (Coincidentally, I saw another good example, the Korean Mother, earlier in the week, but this one is better.) It unfolds not with the breakneck velocity of a typical movie of this sort, but with the gradual, unforced, character-based focus of a novel. It relies more on deduction and the pursuit of clues than on sudden twists and surprises. Few viewers, I imagine, will be shocked when the chief villain is unmasked, but this won't limit anyone's enjoyment of the proceedings.

The film is based on the novel of the same name by author Stieg Larsson, who cited various well-known mystery writers as inspirations. Larsson died in 2004, a year before The Girl with the Dragon Tattoo was published. He wrote two more books featuring the same characters (a fourth was in progress at the time of his death). All three episodes of the so-called "Millennium Trilogy" have been filmed and released in Sweden, but (at least at this point) only The Girl with the Dragon Tattoo has been picked up for U.S. distribution. There's little doubt that, one way or another, the other two pictures will make their way to these shores (especially once the DVDs are available in Europe).

Three separate and apparently unrelated threads open the story. Investigative journalist Mikael Blomkvist (Michael Nykvist) has been found guilty of libeling a corporate tycoon after evidence used in an article Mikael wrote is determined to be fraudulent. He is sentenced to three months in prison, but has six months to get his affairs in order before serving the term. Elsewhere, an elderly man, Henrik Vanger (Sven-Bertil Taube), sitting in an opulent room in a mansion begins to weep when he opens a package and discovers that it contains a framed dried wild flower. Finally, ex-con hacker Lisbeth Salander (Noomi Rapace), learns that her previous parole officer has died and she is now under the thumb of a sadist who believes he can blackmail her into performing sexual favors in return for reports of good behavior. Lisbeth, who is as tough as they come, is not one to take this sort of thing passively.

Eventually, these three characters are brought together by the narrative, with two of them - Mikael and Lisbeth - investigating a mystery proposed by the third. The melding of Mikael's traditional investigative methods with Lisbeth's modern ones (not only is she able to get through almost any firewall, but she has a photographic memory and is an excellent cryptologist) makes for a fascinating mix and allows them to surmount barriers that might foil either of them individually. As rocks are upturned, dark and ugly secrets scuttle out: Nazi sympathizers, ritual killings, incest, rape, and other sexual perversions. A personal relationship develops between the investigators, but this tempestuous affair is limited by Lisbeth's understandable mistrust of men.

The Girl with the Dragon Tattoo balances character development with plot, and that's crucial to its success. The average thriller is interested in advancing the narrative with little concern for whether the protagonists become cardboard cut-outs. Here, Mikael and especially Lisbeth are as intriguing - if not more so - than the mystery they are investigating. Viewers don't mind when director Niels Arden Oplev takes a break from the main story for a tangent. Lisbeth's interaction with her parole officer could be excised from the movie without damaging the investigation, but its value comes in what it reveals about her. Will the Hollywood remake (which is in the works) contain it? If not, we will lose a critical component of understanding this character.

Not being overly familiar with Swedish cinema, this is my first exposure to Noomi Rapace, but she has an impressive screen presence. Thin and almost predatory in appearance, she hides an unconventional beauty behind an icy shield. Apparently, Rapace prepared for seven months to play Lisbeth and the singular performance argues that it was worth the effort. (One hopes she will be considered for the English-language version.) I have seen Michael Nykwist before and, as expected, he holds up his side of the drama, although the role of the middle-aged crusader is more conventional. The heat between these two - which comes in waves and doesn't play out with the sappiness of a conventional romance - is perfectly explored and executed.

The Girl with the Dragon Tattoo is a long movie, but it absorbs for all 151 minutes. When the end credits began rolling, I was genuinely shocked, not believing the full time had passed so quickly. The film does us a favor by wrapping up the loose ends and, although there is room for a second installment, none is demanded. So we can take heart that The Girl Who Played with Fire and The Girl Who Kicked the Hornet's Nest are out there, but we don't have to grind our teeth in frustration that they are not yet available. Still, if The Girl with the Dragon Tattoo is an indication of what awaits, I'll be as excited to see these movies as I will be to see any of 2010's other, more high profile sequels.

Girl with the Dragon Tattoo, The (Sweden/Denmark/Germany/Norway, 2009)