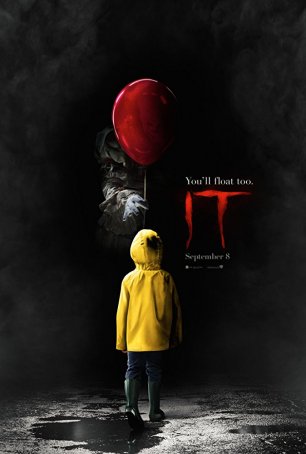 What is it about clowns, anyway? Why do some people find them hilarious while others are creeped out by them? Whatever the case, author Stephen King exploited the duality of clowns – always smiling, seemingly-friendly, weirdly inhuman – in his 1986 novel, It. The title creature, which appeared most frequently as Pennywise the Dancing Clown, was a macabre, homicidal homage to Claribel, Bozo, and Ronald McDonald. It’s no wonder there was a drop in professional clowns being hired for kids’ parties the year after It’s publication. According to King, this is one of his favorite books (at least among those he has written). A 1990 TV mini-series exists but this new motion picture represents the first time It has been brought to the big screen. The movie, which lingered for a half-decade in preproduction, represents the culmination of the efforts of a large number of people, including the teams led by departed director Cary Fukunaga and eventual director Andy Muschietti.

King fans will note that the best movie adaptations of the writer’s work have been his non-horror stories: Stand by Me, The Shawshank Redemption, Misery, The Green Mile. His horror-related films have been of variable quality, with the best two being (arguably) The Shining (King would disagree) and Carrie. It may represent the best movie version of any King horror story – and it covers only half the material in the 1100+ page book. 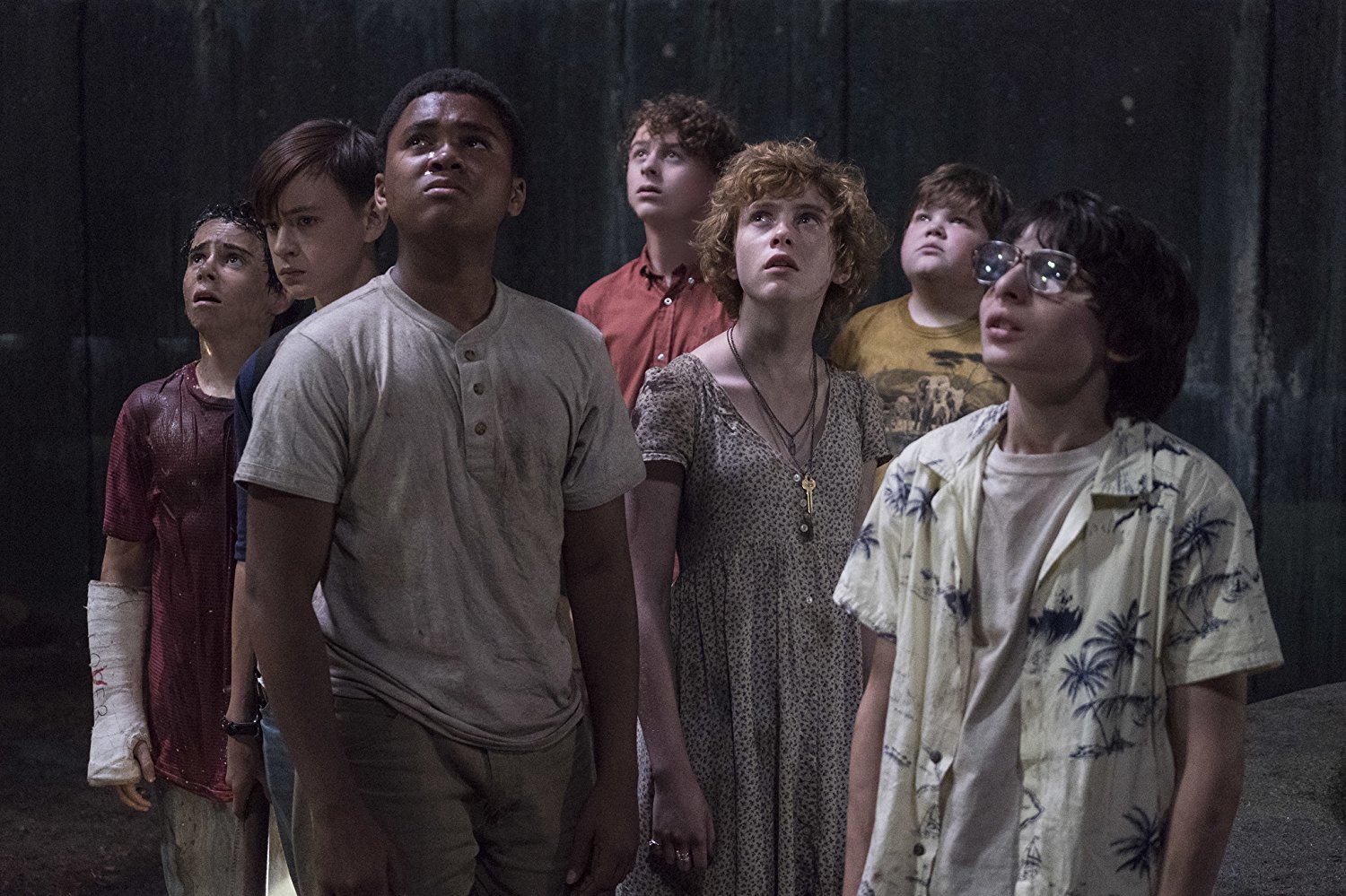 Plans are in place for a Chapter 2 of It, although that will likely take three years to reach screens since it’s only in the earliest stages of pre-production. However, the screenwriters have parsed the source material in such a way that this installment of It can stand on its own, eliminating the frustration that could result from Chapter 2 never being produced. Although the story is mostly faithful to the novel, the screenwriters have made some deviations in the adaptation process. Aspects of the ending have been reworked to be more cinematically coherent and several controversial elements have been removed. The result is a strong narrative that doesn’t fragment at the end.

The movie relates the events presented in the book’s “early” timeline – the one in which the protagonists are 11 years old – and time-shifts things from the late 1950s to the summer of 1989. The action centers around a group of outcasts who call themselves The Losers: Bill (Jaeden Lieberher), Richie (Finn Wolfhard), Eddie (Jack Dylan Grazer), Stanley (Wyatt Oleff), Ben (Jeremy Ray Taylor), Mike (Chosen Jacobs), and the only girl, Beverly (Sophia Lillis). Following the death of Bill’s younger brother, George, at the hands of the sewer-dwelling Pennywise (Bill Skarsgard), all seven of The Losers begin experiencing visions of the clown and/or physical embodiments of things they fear. Pennywise, they learn, emerges every 27 years in the town of Derry, Maine to kill children and feed on their terror. This group, however, is determined to fight back – something easier said than done in these circumstances. 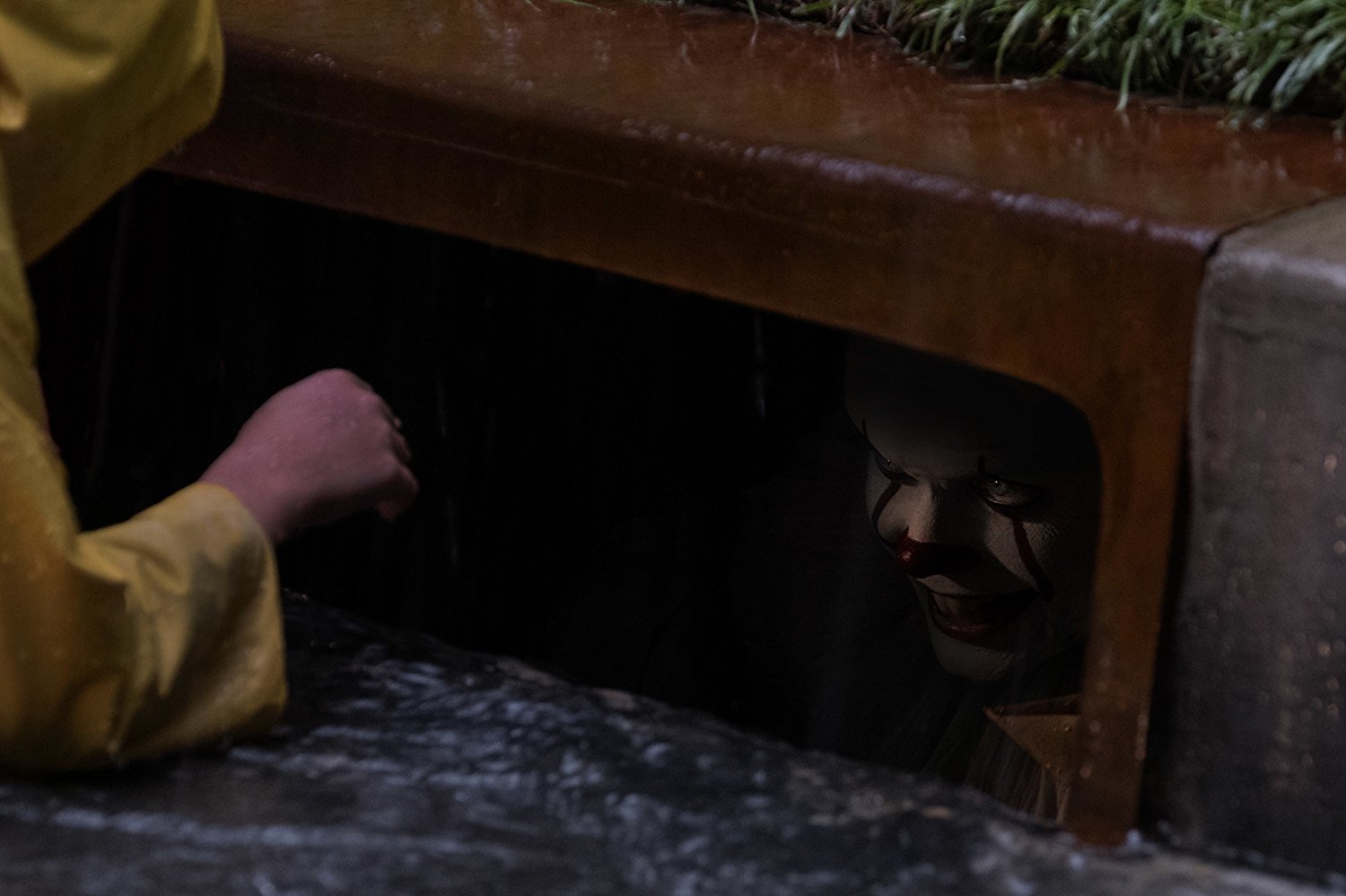 One reason why It works is that it doesn’t rely solely on jump-scares and gore to startle audiences. Yes, there are some of both, but It is more about building tension than cheap gimmicks. The film also offers more than traditional horror. There’s a strong element of childhood friendship – the hallmark of Stand by Me – and a statement about how not all monsters are inhuman. The film’s bullies – older kids like Henry Bowers (Nicholas Hamilton) and adults like Henry and Beverly’s abusive fathers – are as terrifying in their own ways as Pennywise. Although It didn’t scare me (few horror films, even the best of them, do), it left me unsettled.

For the cast, the filmmakers went with a group of little-known actors. This is true not only of the children but the adults as well. Pennywise is played with uncommon spookiness by Bill Skarsgard (the brother of Alexander and son of Stellan). Emerging from the long shadow of Tim Curry, whose interpretation of the clown was a highlight of the TV mini-series, Skarsgard makes Pennywise his own from the shocking first scene, which violates a Hollywood rule about how young children are treated on-screen. Jaeden Lieberher, who plays the stuttering Bill, was recently seen (although not by many) as the title character in The Book of Henry. Finn Wolfhard is probably best known for his role as Mike in Stranger Things, a TV series inspired in part by King’s writings that incorporates the same kind of childhood bonding that occurs among The Losers.

It isn’t perfect. There’s too much repetitive wandering around in the sewers and the running time seems long for the material as presented. There are credulity problems with the resolution but this is common in horror where the vanquishing of a creature of great power and evil typically requires a contrivance. However, horror, like a road movie, is more about the journey than the destination, and It offers a strong and creepy ride. Stephen King fans can rejoice that Hollywood has done justice to one of the author’s scary books.