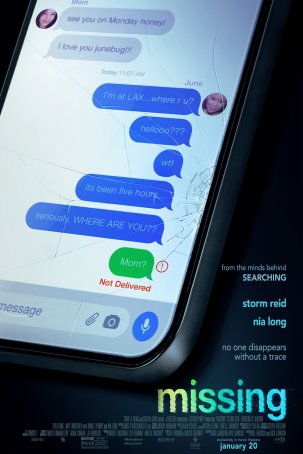 Missing is the stand-alone “sequel” to 2018’s Searching, the mystery/thriller that presented the story via computer screen captures. Although only tangentially related to Searching and featuring a completely new cast, Missing uses much the same approach for developing its narrative. It opts to “cheat” more often than its predecessor (employing security camera footage and news broadcasts rather than a strict real-time focus on the screen), highlighting a limitation inherent in the format. Like found-footage movies, the rules often get bent in service of telling a coherent story.

Missing is inferior to Searching. Both films do a good job of setting up the situation, introducing tension, and ratcheting up the level of suspense as various twists and turns derail expectations. Unfortunately, Missing takes things a few steps too far; the resolution is preposterous, to the point where one is almost tempted to laugh out loud at the B-movie-inspired “reveal.” Another issue is that the focus on plot contortions in Missing curtails one of Searching’s strengths: the use of electronic media to flesh out the absent character. While combing through his daughter’s accounts and posts in the earlier film, the girl’s father came to know sides of his daughter that were hidden from him. This element isn’t handled as well in Missing.

The writing/directing team has changed with Nick Johnson and Will Merrick (editors for Searching) taking over for Sev Ohanian and Aneesh Chaganty, although the latter pair have a “story by” credit. One has to wonder why Sony elected to push this film into theaters rather than accord it a direct-to-streaming release. Everything about the film, especially the format, is a better match for at-home viewing. The concept of having the visuals mimic a computer screen argues that the best way to watch something like Missing is on a tablet or laptop.

Missing opens with a video clip that shows the “last family vacation” of June Allen (played as an adult by Storm Reid) and her parents, Grace (Nia Long) and James (Tim Griffin). Shortly after that trip, James dies of cancer and Grace is left to raise her daughter on her own. Skipping ahead to the present, we learn that Grace and her current beau, Kevin (Ken Leung), are headed for a week-plus vacation in Colombia. Left behind in Los Angeles, June parties hard with her best friend, Veena (Megan Suri), but, when it comes time to pick up her Mom at the airport, no one is there. Initially puzzled but increasingly frantic, June uses online tools to trace her mother’s footsteps, getting support from a local P.I. (Joaquim de Almeida) and, when a kidnapping looks likely, FBI Agent Park (Daniel Henney). But the trail quickly becomes twisty with the roster of suspects shifting and a revelation that Grace may have been hiding the biggest secret of all. 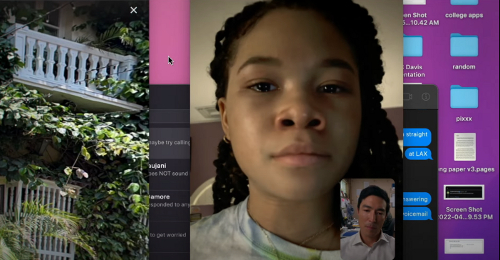 Missing zips along at a breakneck pace, thwarting any and all attempts to employ logic by not providing enough downtime for the viewer to pause to consider how nonsensical some of the story elements are. Plot contrivances reach critical mass toward the end, however, when the movie pulls one white rabbit too many out of the hat. One problem often occurring in thrillers like this is the need to overreach to keep viewers guessing and that usually results in silly, unconvincing resolutions.

The cast is comprised of recognizable faces but no one with sufficient star power to damage the illusion that these are “normal” people. Storm Reid is on an ascending career arc for good reason; she has been snaring increasingly visible roles since 2018’s A Wrinkle in Time. Nia Long is the best-known name on the marquee, although her presence is somewhat limited due to her status as being “missing.” Veteran actor Joaquim de Almeida gets a little face time (literally) as June’s man on the ground in Colombia.

Missing works well enough as a popcorn flick that doesn’t demand much in the way of concentration. That makes it a solid throw-way that offers a couple hours of forgettable entertainment. However, while the gimmicky storytelling method might have boasted a novelty value in 2018 when Searching was released, a lot has happened during the last five years. What might be a selling point for watching Missing at home is an Achilles Heel for theatrical viewing. In 2023, it doesn’t fit in terms of viewers’ heightened expectations for a Destination Movie or the grandeur mandated for the price of admission.