If there’s one adjective I overuse when discussing Blumhouse movies, it’s “uneven,” and I’m going to apply it again with Nocturne, a horror film that grafts a Faustian plot element onto a story about sibling rivalry. Take away the supernatural aspect and Nocturne might have worked as an effective thriller about the jealousies that divide and the ties that bind sisters. Love and hate often entwine so closely that they can be indistinguishable and that’s one idea that Nocturne effectively explores. Unfortunately, the parts of the story that introduce one girl’s deal with a demon feel grafted-on, extraneous, and obligatory. First-time feature writer/director Zu Quirke does a good job setting things up and sticking the landing, but her approach to the horror elements is generic at best.

Twins Juliet (Sydney Sweeney) and Vivian (Madison Iseman) are gifted pianists attending an exclusive academy for musicians. Although Juliet is arguably the more talented sister, her shyness and reticence hold her back while Vivian’s outgoing, fearless nature allows her not only to earn a Julliard scholarship but makes her the prized pupil of the school’s most demanding teacher (Ivan Shaw). Things change, however, when Juliet discovers the cryptic notebook of a dead classmate, Moira (Ji Eun Hwang), whose suicide shocked the academy. With the help of the unnatural force that catapulted Moira to excellence, Juliet begins to eclipse Vivian musically while showing an uncharacteristic ruthlessness in diminishing her sister to achieve her goals. 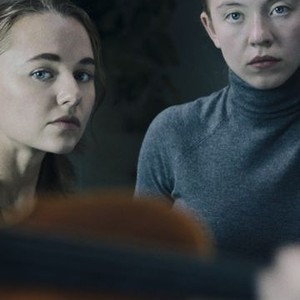 The relationship between Juliet and Vivian is well developed with the conflicting emotions one might expect in the pressure-cooker environment of a competitive music school. The scenes related to Juliet’s “bargain” with a demon are less effective due in part to the amorphous nature of the creature. (The movie might have worked better if it left open the question of whether the monster is real or a manifestation of something dark in Juliet’s psyche. However, as presented on-screen, the truth is never in doubt.) Both actresses are capable and Sweeney in particular exhibits moments of excellence. Her character doesn’t have a lot of dialogue so the movie relies on her eyes and facial expressions to convey emotions that run the gamut from paralyzing fear to mania. The two exhibit the right kind of chemistry – something that starts out conventional and curdles as tensions between them come into the open. Unfortunately, the demonic presence keeps getting in the way.

There’s a late-innings twist. This being Blumhouse, that can be taken as a given. Considering the constraints established by the preceding storyline, this one works fairly well. It doesn’t seem unwarranted or unearned. It makes sense considering all that has come before and, best of all, it satisfies in its own gruesome way. Nocturne represents one of four films being released by Amazon Prime as part of the special October umbrella “Welcome to the Blumhouse.” Although missing opportunities to present a memorable production, Quirke has crafted the kind of popcorn horror film that doesn’t demand much from its audience and, in the process, delivers something unsettling.