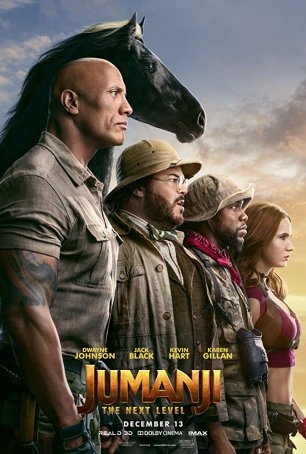 Perhaps there are interesting directions in which the filmmakers could have taken the Jumanji series – after all, the 2017 reboot, Jumanji: Welcome to the Jungle, was vast improvement over the mid-1990s original. Unfortunately, driven by Hollywood’s “play it safe” mantra, Jumanji: The Next Level is content to pretty much regurgitate its predecessor. And, as with any derivative sequel, the story isn’t as fresh, the action isn’t as engaging, and the comedy isn’t as funny (although, to be fair, there are some solid laughs). The Next Level feels a little too much like a money grab and, although moderately entertaining on a popcorn level, there’s a sense of missed opportunity. 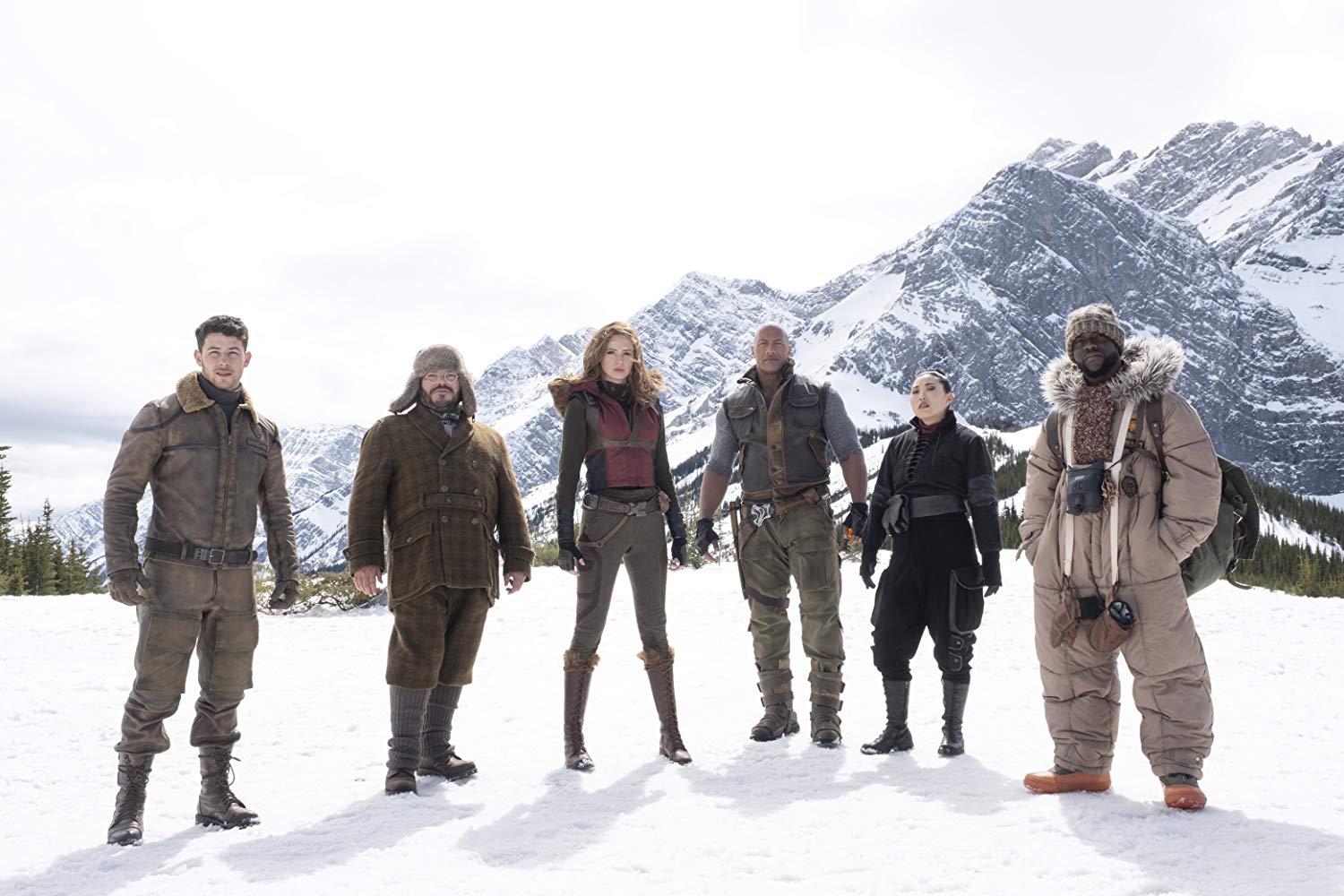 As a refresher, in Welcome to the Jungle, the pairings were as follows: Spencer/Bravestone, Fridge/Moose, Bethany/Oberon, and Martha/Ruby. To mix shake things up, The Next Level adds Danny DeVito into the mix as Spencer’s grandfather, Eddie, and Danny Glover as Eddie’s one-time best friend, Milo. This time, when the game starts, Spencer is MIA, allowing Eddie to become Redstone. Milo morphs into Moose, forcing Fridge into Oberon. (Martha/Ruby remains the same.) Poor Bethany ends up being a horse. There’s also a new character, the thief Ming (Awkwafina).

Thankfully, The Next Level doesn’t spend a lot of time explaining the hows and whys associated with a group of real-life people returning to the Jumanji game world. Less is better and one could argue that the 15-minute setup still goes on for too long. We don’t care much about Spencer’s self-doubt or the fractious relationship between the two septuagenarians. Eventually, we’re back in the game again, with the familiar quartet starting a new adventure to retrieve a valuable gem from the merciless Jurgen the Brutal (Rory McCann), whose life’s ambition is to spread destruction and mayhem across the face of Jumanji.

As with Welcome to the Jungle, the most enjoyable aspect is watching the actors interpret the people inhabiting their bodies. To this end, we are provided with an opportunity to see Dwayne Johnson imitate Danny DeVito and Kevin Hart do an impression of Danny Glover. (Sorry, but the latter’s signature line, “I’m too old for this shit,” isn’t used despite its obvious appropriateness.) The Rock, who displayed a surprising aptitude for comedy in the earlier Jumanji film, is in fine form here during the scenes when Eddie is “inside” Bravestone. 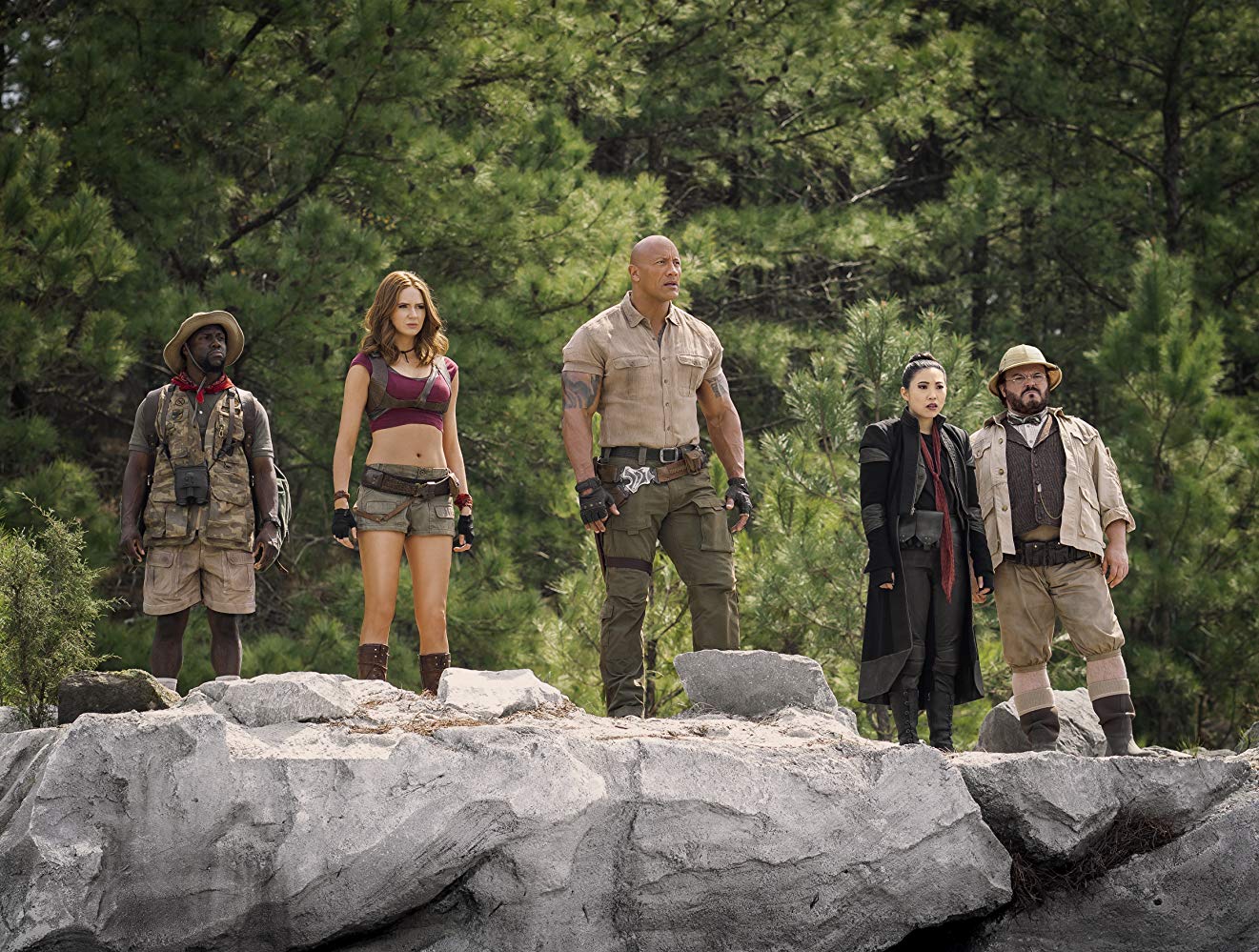 Co-writer/director Jake Kasdan sticks to the formula he developed for the 2017 film. The result is akin to Deadpool 2 – a considerable fall-off from the first but still adequate for multiplex entertainment. However, while financial considerations might justify a future Jumanji 4, the premise is already wearing thin. The in-game narrative of progressing through maps/levels to reach the boss battle isn’t sufficiently interesting to sustain an audience’s interest, meaning that all the heavy lifting falls on the comedic elements and actor/character interaction. That’s enough, but just barely.

It’s probably fair to argue that The Next Level delivers close to what viewers expect from it. And, although the freshness is diminished, the likability factor for the actors is off the charts, meaning that audiences will accept a dip in quality for the privilege of spending a couple of hours with these people. Expect a few laughs but not much in the way of genuine excitement. There’s nothing here to elevate the pulse and the animal rampages (ostriches and mandrills) are too obviously computer-generated to create a whiff of danger. Now that Jumanji has become a legitimate franchise, it needs to guard against the pitfalls of the designation and, in its determination to rely on the tried-and-true elements of Welcome to the Jungle, The Next Level stands still rather than taking a step forward.