Most of us living in the United States have never heard of “Peterloo” so Mike Leigh’s recreation of the events leading up to the infamous August 16, 1819 massacre represents a history lesson as well as an effectively crafted (albeit too long) drama. On the occasion of its bicentennial, Leigh uses the tragedy of this infamous date as an opportunity to show similarities in the socio-political events that existed at the time of Peterloo with those of today – in particular, extreme mistrust of government and growing income inequality. In fact, the film’s politics are at times so strong that it almost appears as if Leigh, although no stranger to movies with a social conscience, has been replaced by Ken Loach.

The film, like the real-life event, is set in Manchester England several years after the end of the Napoleonic Wars. In the wake of Wellington’s victory at Waterloo, an extended period of famine and unemployment has stricken England. This gives rise to a wave of radical political activists who demand (among other things) universal suffrage (for men), an end to the Corn Laws (that caused bread prices to skyrocket), and governmental reform. The Manchester Patriotic Union is organizing a demonstration for August 16 to feature the celebrity radical Henry Hunt (Rory Kinnear). A crowd of more than 60,000 gathers at St. Peter’s Field for the event. 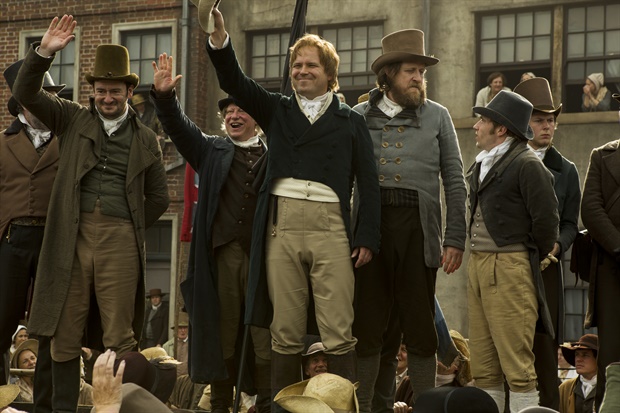 The local magistrates and property owners are alarmed by the size of the crowd and what they perceive to be the danger of the radical rhetoric. The cavalry is called in to arrest Hunt and his cohorts and disperse the crowd. Panic quickly takes hold of those gathered, resulting in 15 deaths and more than 600 injuries. Newspaper coverage of what would become known as the “Peterloo Massacre” is widespread and most are horrified by the accounts. However, the Prince Regent (Tim McInnerny) praises the soldiers for their swift and decisive actions to stamp out something pernicious and dangerous.

Leigh’s chronicle of the incident is a long affair, clocking in at 154 minutes. The film’s talky first half is challenging. Although one can argue that some of the speeches are necessary to establish the political climate and make the viewer aware of how dire the circumstances are for the working class (including one PTSD-afflicted soldier who can’t find employment), the narrative at times becomes plodding as countless orators are given the camera’s full attention for sometimes-lengthy (and flowery) diatribes against the current system. “Give me liberty or give me death!” shouts one, echoing Patrick Henry 44 years later. Peterloo follows the activities of a number of activists, several of whom have been jailed by the time the demonstration occurs. 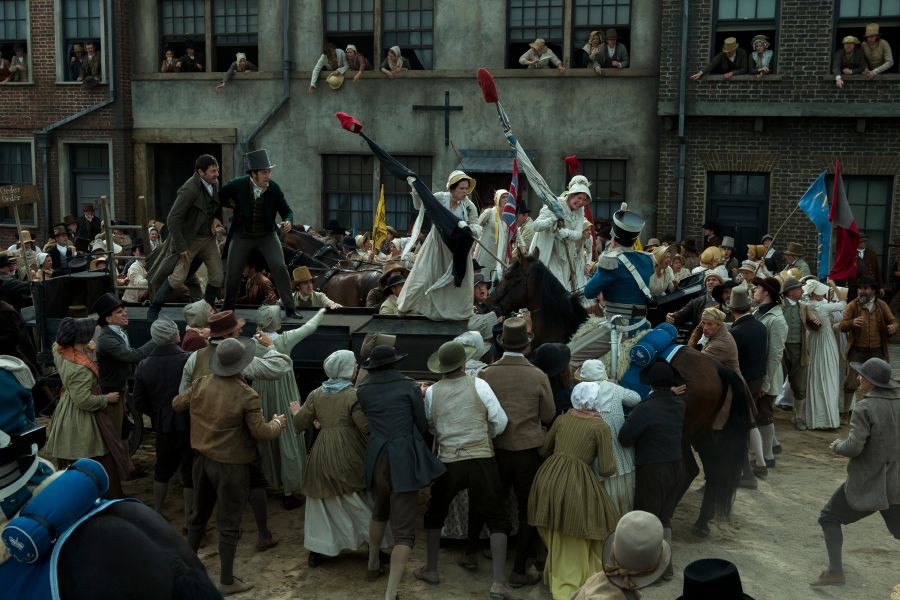 To the extent that the film’s first half requires patience, the second half – occupied with the immediate build-up to Peterloo and a detailed dissection of the event using a combination of historical information and conjecture – is both riveting and tragic. Leigh makes the most of his budget, using CGI to “reconstruct” the backdrop to be representative of how St. Peter’s Field looked on that fateful day. He employs computers to expand the crowd of 200 extras to fill up the screen. Working with longtime collaborator Dick Pope at the lens, Leigh brings the viewer into maelstrom as the unarmed civilians are set upon by mounted soldiers wielding cutlasses.

Peterloo is an ensemble piece, following as it does a variety of individuals living in Manchester at the time. We become familiar with some of their faces: the pinched and cynical Nellie (Maxine Peake) and her more optimistic husband, Joshua (Pearce Quigley); the reformer Samuel Bamford (Neil Bell), who helps organize the demonstration then leaves when told he cannot address the crowd; Joseph (David Moorst), a solider in Wellington’s army who returns home to poverty; and Deputy Chief Constable Nadin (Victor McGuire), a nasty bully who enjoys beating up those who get in his way. However, with the exception of the preening, self-important Henry Hill, there are no standout characters; Leigh is more concerned with the political climate and events that happened at St. Peter’s Field than the people involved in them.

Although the film’s length and uneven pacing demand a degree of forbearance from viewers, it is a meticulous and effective recreation of an event that many people (especially those for whom it isn’t a part of local history) may be unfamiliar with. The synergy between the root cause of the peoples’ unrest and some of what we see today will not be lost on many viewers; it gives Peterloo a sense of immediacy that some history-based films don’t have. I learned things while sitting in the audience and that’s a claim I rarely make about any motion picture circa 2019.