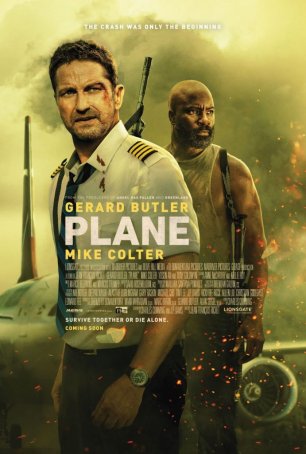 Remember how Liam Neeson made it an annual tradition to release a cheesy action/thriller every January or February? Well, Neeson appears to have retired from that business leaving the door wide open for Gerard Butler to step through. Butler has the same kind of screen presence as Neeson (without the Oscar nomination) and proves equally capable of playing the heroic everyman part. He’s stuck with a dumb title (no one could come up with something catchier than Plane?) and a dumber script, but that’s par for the course with ‘80s-flavored action films. The biggest mistake made by the film’s distributor, Lionsgate, was to send this to theaters rather than striking a deal with a major streaming company. With its shoddy look, poorly lit interior shots, and overall B-movie aesthetic, Plane would have been an adequate way to waste a couple of hours lounging on the couch and munching salty snacks. But as a multiplex draw? Not quite, even if you bring the salty snacks along.

Plane plays out like a fusion of Airport (the disaster-in-the-sky franchise that was popular during the 1970s and was lampooned by Airport in 1980) and Rambo (insofar as that was about a bloody jungle rescue). However, since the movie clocks in at around 100 minutes, it doesn’t have time to offer more than a Cliff Notes homage to its inspirations. Numerous subplots are introduced before being unceremoniously dropped or rushed to completion. Most of the secondary characters are completely undeveloped and the villain is more one-dimensional than is usual in this sort of movie. 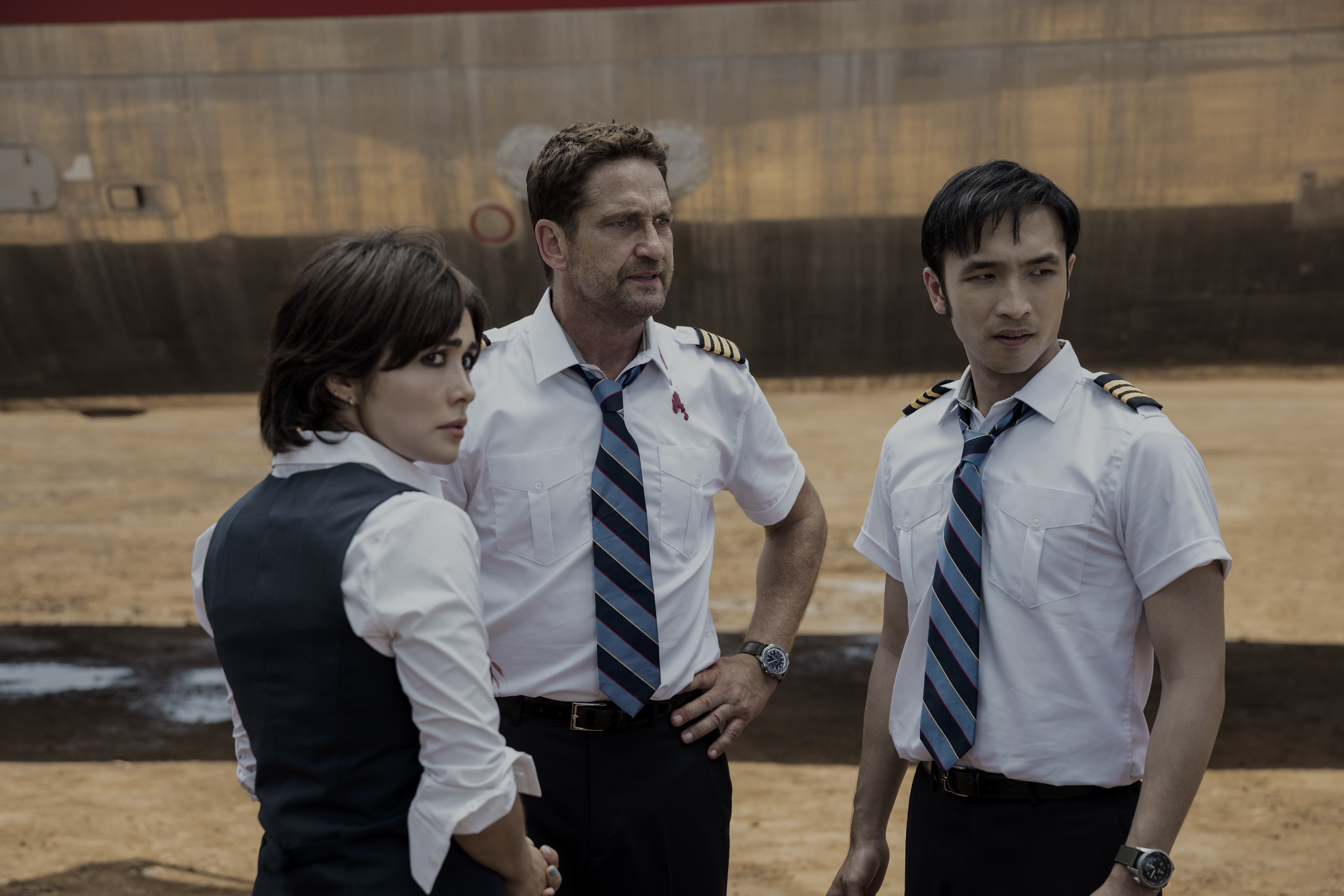 After having lost a prestigious cabin job as a result of assaulting an unruly passenger (airplane pilot fantasy #3), Brodie Torrance (Butler) finds himself shuttling three-quarters empty planes around East Asia for the cut-rate airline company Trailblazer Air. If everything goes right, this particular trip will allow him to spend New Year’s Day with his adult daughter. Needless to say, things don’t go right. The film’s first few scenes provide perfunctory introductions to the only three people on the plane (other than Brodie) anyone will remember (there are a total of 14 passengers and five crewmembers): co-pilot Samuel (Yoson An), flight attendant Bonnie (Daniella Pineda), and convict Louis Gaspare (Mike Colter), who’s being transferred in the care of an armed marshal. High over the Philippines, the plane is struck by lightning, loses power, and Brodie has to execute a crash-landing. Two people die in the process – one flight attendant (not Bonnie) and the officer in charge of Louis – in a reminder that seat belts should always be worn while a plane is crashing to the ground.

The “out of the frying pan, into the fire” scenario means that more awaits the survivors on the ground than the brutal heat of the Philippine jungle, starvation, and dehydration. The island upon which they land is controlled by militant separatists who perceive visitors like missionaries and stranded airplane passengers as convenient hostages. When Brodie and the now-freed Louis go in search of help (or at least a working radio or phone), the bad guys converge on the mostly intact aircraft. Meanwhile, back at corporate headquarters, Trailblazer honcho Hampton (Paul Ben-Victor) and his problem solver, Scarsdale (Tony Goldwyn, playing a more no-nonsense role than usual), are on the job. Since the Philippine government isn’t willing to lend a hand, they have to rely on a group of heavily-armed, well-paid mercenaries to effect a rescue. 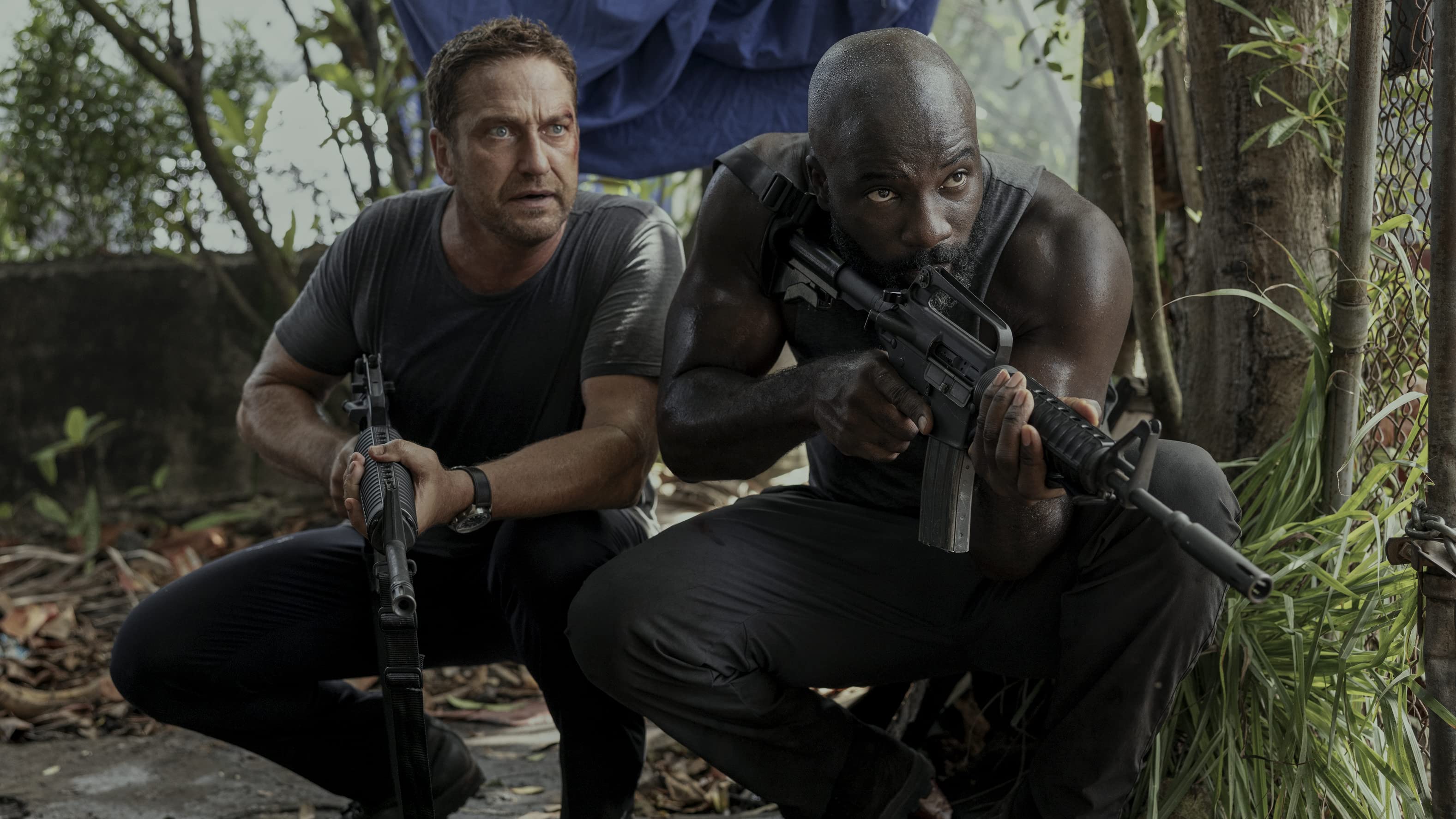 The only complaint Butler fans might have with Plane is that at no point does the screenplay give the actor the opportunity to yell “This! Is! Sparta!” He gets to do some fighting, some killing, and some non-violent generic heroic stuff. When it comes to accumulating an impressive body count, Mike Colter’s frustratingly underwritten Louis has him beaten. The would-be buddy aspect between Brodie and Louis fizzles because the screenwriters don’t care enough to flesh it out. The most notable thing about Evan Dane Taylor’s Unsmiling Bad Guy is his impressive mane of hair.

Perhaps my biggest complaint about Plane is that it looks like crap. Director Jean-Francois Richet understands how to direct action sequences. His previous outings include the Assault on Precinct 13 remake and the 2016 Mel Gibson vehicle, Blood Father. His handling of the crash landing generates about ten minutes of white-knuckle suspense and the climactic firefight is presented in satisfying B-movie fashion. But the dim lighting, dubious set design, and chintzy special effects take a lot away from the overall experience, edging it dangerously close to self-parody at times. Seeing Plane in a theater makes things bigger, but that doesn’t mean it makes them better. The movie offers limited entertainment for those who enjoy this sort of fare but it’s impossible to recommend as anything more than a throw-away at-home selection when all the better streaming titles have been watched.