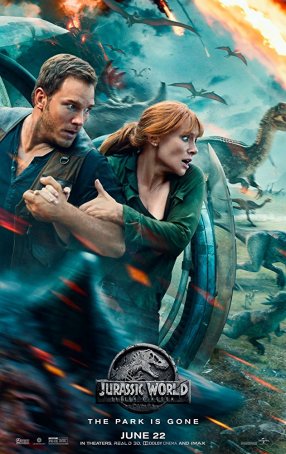 The only thing that separates Jurassic World: Fallen Kingdom from the lamentable Jurassic Park III is that the filmmakers of the newest sequel didn’t opt for cheap production values the way they did back in 2001. Both films feel tired an uninspired, doing little more than hitting all the expected notes as they plod along. Perhaps it was a mistake to re-watch the original Jurassic Park and its re-imagined successor Jurassic World prior to seeing installment #5 because those two films thrive on elements missing here: a sense of majesty, a hint of wonder, and a feeling of danger that’s more organic than obligatory.

In trying to stir the pot a little and avoid remaking Jurassic World (which audiences, who love the cinematic comfort food of familiarity, may have been okay with), the movie goes back to something The Lost World: Jurassic Park did – get the dinos off the island (in this case, to preserve them from re-extinction). Of course there’s a new alpha monster – another genetic creation from the mind of mad scientist Dr. Henry Wu (BD Wong, who has taken his walk-on role from Jurassic Park and turned it into something diabolical). However, while the first half of the film (which transpires on a volcano-ravaged Isla Nublar) has its pleasures, the second half, which features dinosaurs chasing people through the halls of a gothic mansion (I’m not making this up), is a disaster, at times seeming more like self-parody than action/adventure.

The two lead human characters from Jurassic World are back. Chris Pratt plays Owen Grady a little more like Indiana Jones this time around and Bryce Dallas Howard’s Claire Dearing has been reborn as a kick-ass James Cameron action-female type. No more running around in high heels. Jeff Goldblum’s return as Dr. Ian Malcolm is as disappointing as it is welcome. While it’s always a pleasure to see Goldblum, his appearance is little more than a glorified cameo. He pontificates about life finding a way and how we may have engineered our own extinction through hubris – the most overt the film gets with a global warming allegory – but he has less than five minutes total screen time and doesn’t interact with any of the other primary actors.

Newcomers for this go-round include Rafe Spall as the duplicitous Eli Mills with Ted Levine as his henchman – because what would a Jurassic movie be without mercenaries who see $$ whenever they look at a moving dinosaur? Danielle Pineda, as paleo-veterinarian Zia Rodriguez, and Justice Smith as comic-relief specialist and systems analyst Franklin Webb, join the Owen/Claire “save the dinosaurs” team. James Cromwell, with a lousy British accent, plays Benjamin Lockwood, an ex-partner of the late John Hammond. (Is it surprising that they didn’t just bring back Richard Attenborough as Hammond using Peter Cushing/Rogue One technology?) Isabella Sermon is his feisty granddaughter, Maisie (because there’s a rule that all Jurassic movies must have at least one adolescent character, since they scream the best). Toby Jones and Geraldine Chaplin cash paychecks.

Fallen Kingdom is never sure quite what it wants to be and it’s possible to sense the pressure applied to Colin Trevorrow (who co-wrote the screenplay with Derek Connolly) not to repeat himself. Although Trevorrow ceded the directorial duties to J.A. Bayona (whose previous film, the criminally underrated A Monster Calls, allowed him to do a lot more with the human element of a monster movie), he determined the production’s misaligned trajectory. Fallen Kingdom is two pictures in one: an old-fashioned stomp-’em monster movie and a more sophisticated, Mary Shelly-esque look at what happens when Humans play God. These two aspects are poorly integrated, resulting in a herky-jerky tone where some of the exposition sequences drag on too long and a few of the action set pieces feel rushed.

The first half of Fallen Kingdom mostly delivers what it promises – dinosaurs running around on the island, glimpses of the collapsed amusement park a few years later, an Owen/Blue reunion (missing only a little Seals & Croft on the soundtrack), and a volcano. (Yes, characters are given a chance to outrun a pyroclastic cloud – Roger Ebert just turned over in his grave.) The second half is a total mess featuring some bizarre elements like a dinosaur auction and a chase through the halls of an old house. Nods to King Kong aside, Act II of Fallen Kingdom appears to have been inspired by Aliens, right down to the framing of the shots of the new designer dino, indoraptor, poking its snout at its intended victim. Ripley has been split into Owen and Claire and Newt is Maisie. Bryce Dallas Howard doesn’t yell “Get away from her, you bitch!” but she might as well have.

It would be pointless to hope this will be the final Jurassic movie. The ending all-but-promises another one and Trevorrow has spoken about this being a trilogy. Still, cliffhanger elements aside, I have no desire to revisit this world again. It’s played out. There’s only so far you can go with dinosaur movie and this series has gotten to that point…and beyond. Fallen Kingdom isn’t dino-myte. It’s dino doo-doo.