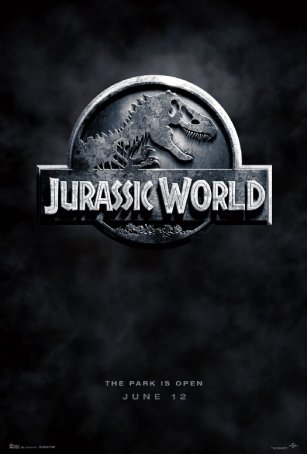 It has been 22 years since Jurassic Park ushered in the modern age of computer generated imagery, becoming the first motion picture to use the then-cutting edge special effects technology to astound and amaze us. Director Steven Spielberg allowed us to believe that dinosaurs were real. Repetition made the second Jurassic Park installment, 1997's The Lost World, a step down and Universal's decision to cut the budget for the third movie, 2001's Jurassic Park III, seemingly put an end to the saga. However, after a 14-year gap, the T-Rexes, velociraptors, and their ilk are back. With Spielberg executive producing and Colin Trevorrow behind the lens, it's time to again return to a universe where amber-encased prehistoric mosquitoes have made it possible for extinct creatures to roam.

Jurassic World features only one returning character from the original trilogy - BD Wong as Dr. Henry Wu - but that's not a drawback. All the necessary types are in place: Chris Pratt's Owen and Bryce Dallas Howard's Claire fill the heroic roles, Ty Simpkins' Gray and Nick Robinson's Zach are the annoying kids, Irrfan Khan is John Hammond's successor, and Vincent D'Onofrio is the unappealing military-type with his own agenda. Really, though, the Jurassic Park movies have never been about the human beings, be they Sam Neill's Alan Grant or Jeff Goldblum's Ian Malcom. They have been about the dinosaurs. Jurassic World features plenty of call-backs to Jurassic Park (including, I assume, the same T-Rex) but there are no cameos for Neill or Goldblum. 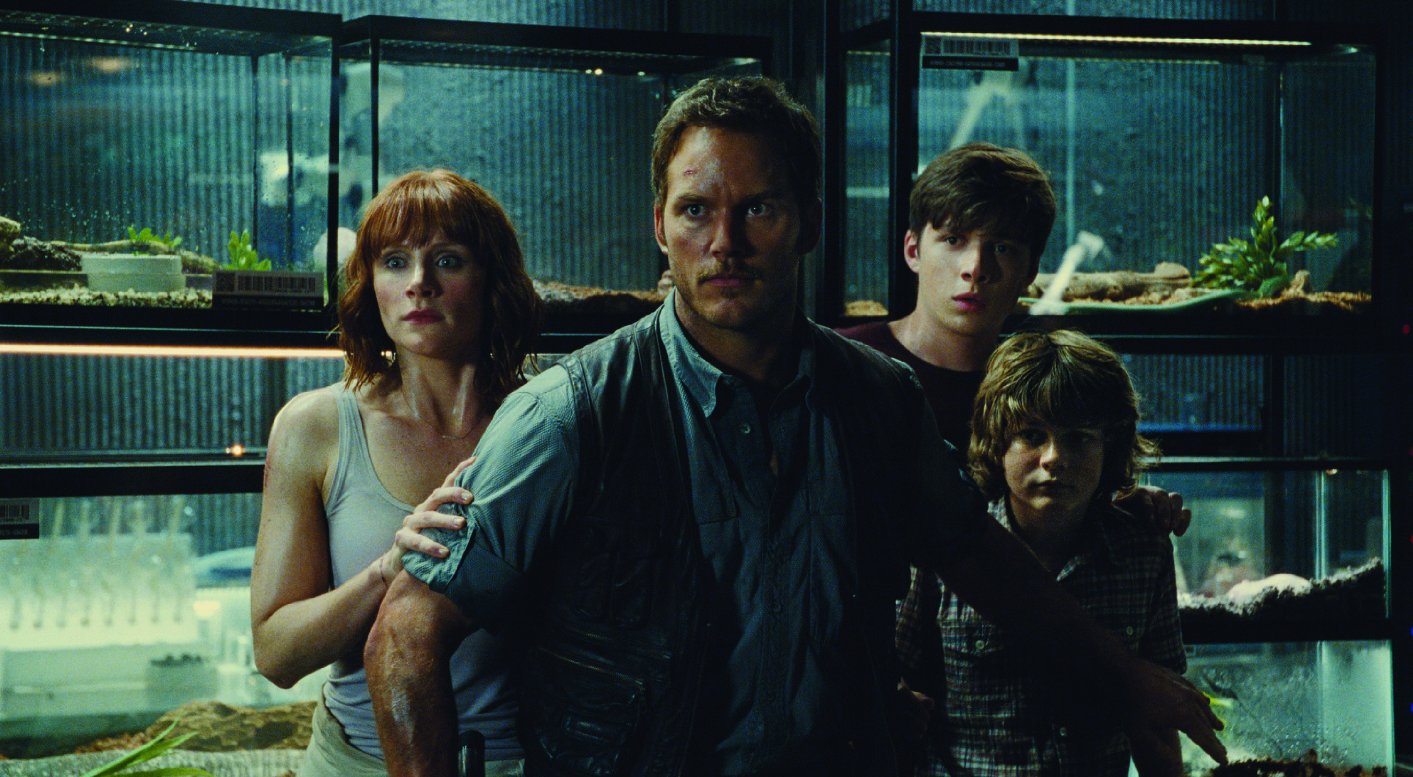 This is the best of the Jurassic Park sequels and does a better job than episodes #2 and #3 in recreating the "feel" of the original. It starts by giving us some time to immerse ourselves in the atmosphere of a fully working dinosaur amusement park - bigger than anything Hammond envisioned.  Clearly, no expense has been spared. The tragedies of the original Jurassic Park are long past, buried and forgotten with the skeleton of the visitor center. The new version has been open for a decade - long enough that there are concerns about attendance waning. Dinosaurs are no longer enough. Customers want something bigger and meaner.

Unsmiling, rigid, and overtaxed, Claire is tasked with keeping the park running - an immense duty that requires a futuristic room and a small army of assistants monitoring the electronics. Owen, a velociraptor wrangler, has found a way to control - to the extent they can be controlled - the most intelligent of the island's denizens. On the day when everything goes wrong, Claire's nephews, Gray and Zach, are in attendance. All hell breaks loose when Jurassic World's latest attraction, the genetically modified Indomitous Rex, escapes from its paddock and decides the 22,000 visitors on Isla Nublar might make for a tasty buffet.  In the immortal words of Ian Malcolm: "Oooh, ahhh, that's how it always starts. Then later there's running and… screaming."

Despite having a slim resume (the quirky indie Safety Not Guaranteed), Trevorrow handles Jurassic World like a pro. He hits all the right notes, giving the two-dimensional characters as much heft as they deserve (which isn't much) and handling the action sequences like a seasoned veteran of Hollywood tent pole features. He references countless other monster movies, including obvious ones like King Kong and Godzilla and less evident choices like The Birds and (especially) Aliens. His style is part Spielberg/part Cameron.

Although this is essentially a big budget monster movie, the filmmakers aren't above a little social commentary/satire. They identify a vexing challenge faced by amusement parks: always having to amp up the thrill level of the attractions to lure back easily bored customers. This could also be seen as an observation about sequels in general and the Jurassic Park films in particular. One T-Rex was enough for the first film.  Now, three movies later, we need the bigger, badder I-Rex. Jurassic World also takes some none-too-subtle jabs at corporate sponsorship and borrows from Aliens when reflecting on the military-industrial complex and how the soldier's mindset considers weaponizing dinosaurs. 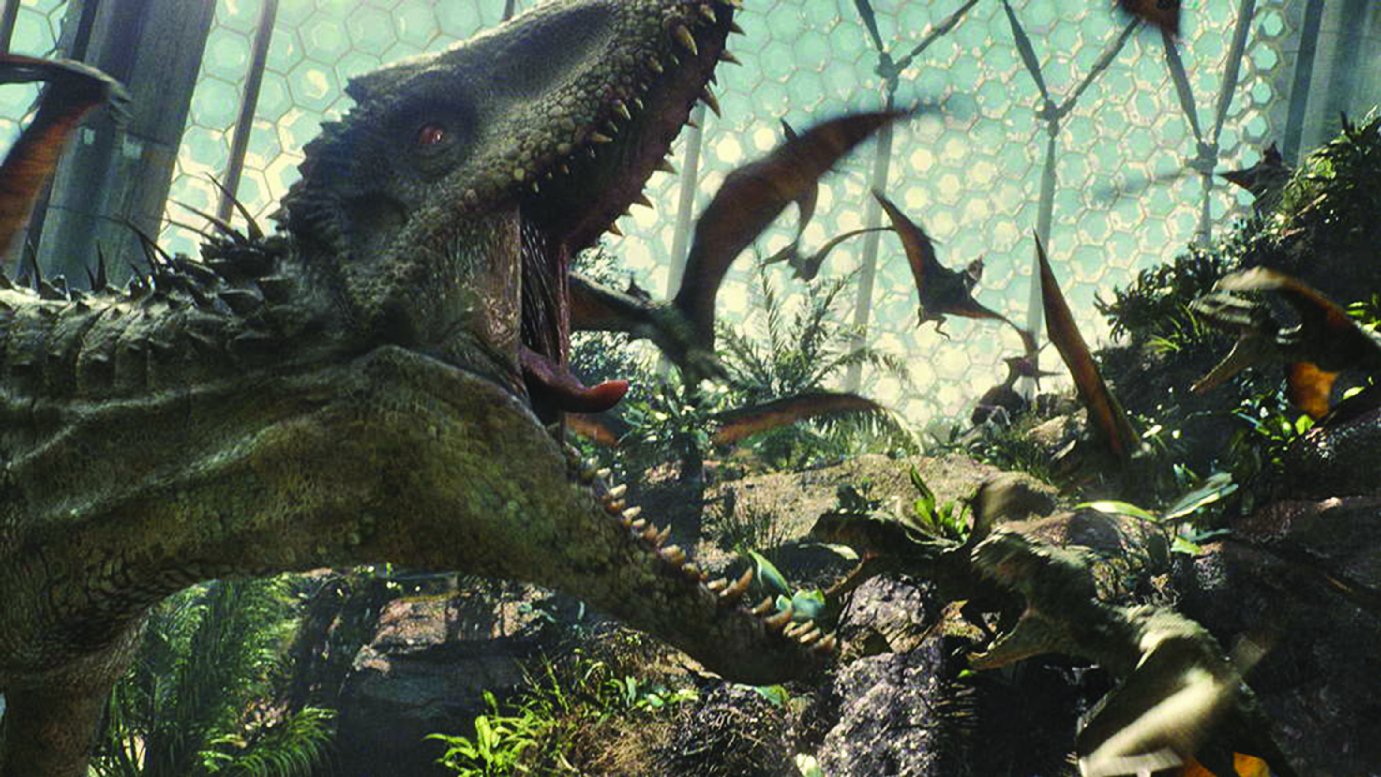 Composer Michael Giacchino recognizes the importance of embracing John Williams' iconic themes rather than jettisoning them (as was done in Man of Steel). Guacchino gives us not only full orchestral renditions of the most noteworthy music but more subdued interpretations when those are appropriate. The dino-effects, both CGI and animatronic, are superior to those in the earlier Jurassic Park movies but that's not surprising considering how much things have advanced over the years. The 3-D is an utter and complete waste and is best avoided. It exists only because of the Hollywood mindset that all summer blockbusters must be released in 3-D to be considered legitimate.

Jurassic World leaves open the door for future installments but, while this is an enjoyable popcorn experience, it works best as a stand-alone follow-up. Trevorrow and his co-screenwriters deserve credit for milking two more worthwhile hours out of the Jurassic Park idea but there's nowhere else for the concept to go. It's played out. Another sequel would be folly. That's a future consideration, however (likely to be determined exclusively by $$). For now, there's only Jurassic World, which has taken the fossilized remains of a beloved franchise and given it a new life than many doubtlessly thought impossible.