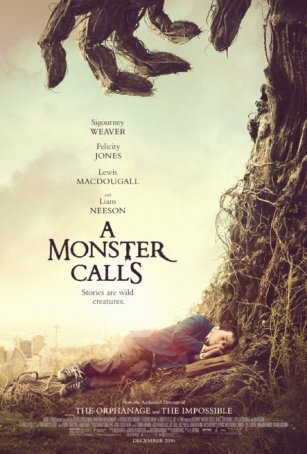 We all have monsters - dark impulses that dwell in the deepest recesses of our minds, occasionally forcing their way into our nightmares or impinging on our consciousness. A Monster Calls asks (but doesn’t answer) the question of whether such monsters can, in addition to giving birth to violent and destructive impulses, be a source of strength and fortitude in the face of grief and other adverse situations. The protagonist of this movie is repeatedly knocked to the ground by the uncaring currents of his life but his monster enables him to weather the most brutal of these incidents and emerge stronger for them. The narrative also leaves open the possibility that the monster may be more than a figment of a boy’s imagination. There’s ample evidence of the possibility but, like the land of Oz, we can never quite be sure. 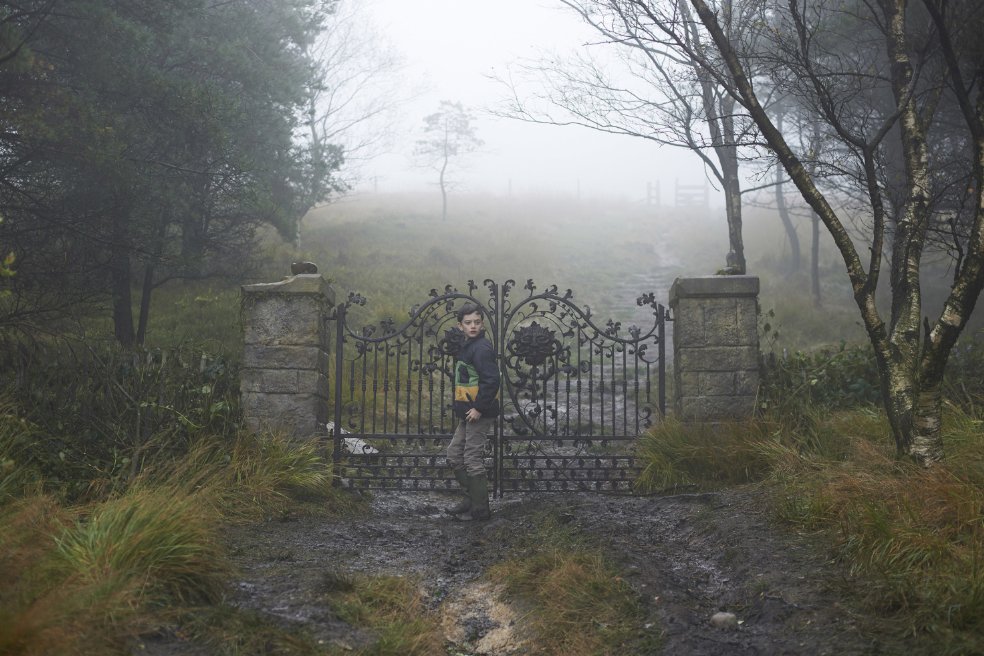 The 2012 novel A Monster Calls won awards for both author Patrick Ness and illustrator Jim Kay. In attempting to recapture the book’s unique dual appeal for his movie, director J.A. Bayona (who made the tough-but-inspirational post-tsunami film The Impossible) elected to meld special effects-enhanced live action with “paper cutout” animation. The result is visually arresting; comparisons to Guillermo del Toro’s Pan’s Labyrinth are reasonable although I found A Monster Calls to have a deeper emotional resonance. Unfortunately, there superficial similarities to Steven Spielberg’s disappointing The BFG that may present a marketing challenge. But the films are very different - their only similarity is the relationship between a giant creature and a child.

Conor O' Malley (Lewis MacDougall) is a sad, lonely child. At age 12, he is, as the narration states, “too old to be a kid, too young to be a man.” His beloved mother (Felicity Jones) is dying of cancer, his father (Toby Kebbell) lives across the Atlantic and rarely sees his son and former wife, his grandmother (Sigourney Weaver) is cold and overbearing, and his schooldays are made hellish by bullies. In short, Conor has a life no one would envy. Then, one night, The Monster (Liam Neeson) comes calling. “I have come for you, Conor,” he booms. Made from the bark, roots, and branches of a giant yew tree that stands in a nearby churchyard, The Monster arrives at 12:07 and informs the frightened boy that he will return four more times. On each of the next three visits, he will tell Conor a story. Then Conor must reciprocate and reveal his darkest nightmare to the Monster.

The three stories illustrate the ambiguity of human nature - good and evil, anger and kindness, fear and brutality all jumbled together. They also show the folly of believing in a magical “happily ever after” panacea. The first story has a dying king, a wicked stepmother, a prince, and true love - all of which are turned upside down when expectations turn out to be untrue. The second story tells of the fight between an apothecary and a parson where the shortsightedness of one and the selfishness of the other results in tragedy. Finally, The Monster tells Conor about an invisible man who wants to be seen. Then it’s the boy’s turn to open up his nightmare and face the unthinkable it represents. He is sure that, once revealed, his “truth” will destroy him. It doesn’t.

A Monster Calls is an unexpectedly powerful and unsentimental exploration of surviving grief and the less-than-noble feelings it can engender. The Monster’s purpose isn’t (as Conor initially supposes) to save Mum or punish the school bullies but to heal Conor, whose emotional turmoil has reached a boiling point. The anger has to be vented, the sadness has to be confronted, and only then will he be able to move forward. More than anything, he has to be able to accept what is happening to his mother in order to say goodbye. A Monster Calls could be considered a “family film” but it is by no means only for children and may be too intense for the younger and more sensitive among them. The movie deals with adult themes and is intended for viewers who are mature enough to absorb and understand them. It’s remarkably deep and forceful and leaves a lasting impression. 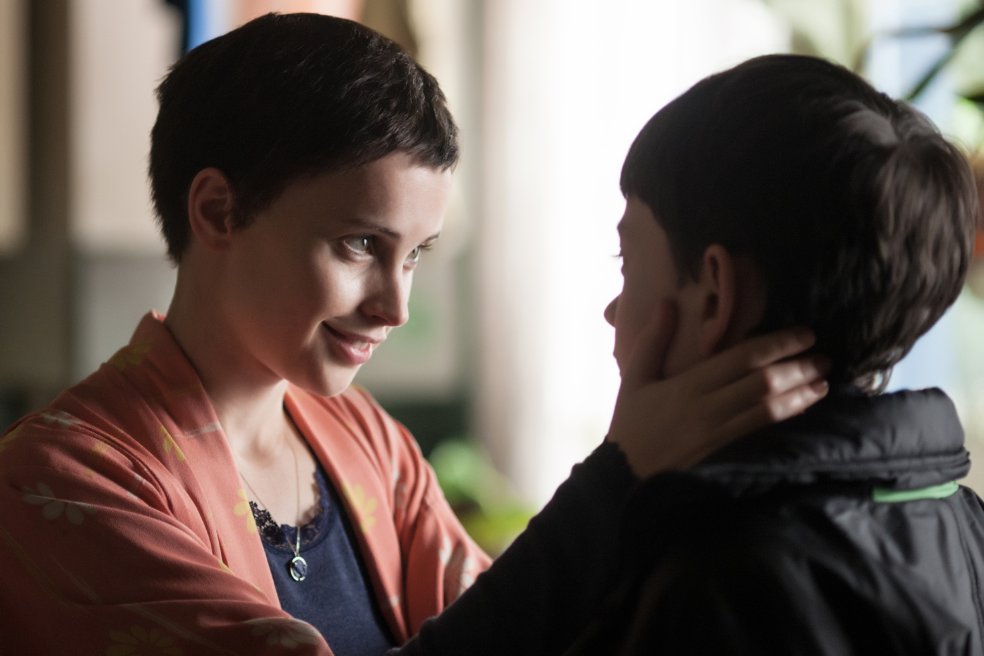 The effects work - indeed, the visual palette as a whole - is top-notch. The Monster, which resembles a living, walking Wicker Man with blazing eyes, is suitably intimidating - not the kind of creature anyone would want to meet at 12:07 am (or any other time, for that matter). Liam Neeson’s booming baritone adds a touch of class to the creature when it speaks but the appearance is sufficiently unnerving that it takes a little while for the viewer to warm up to the possibility that The Monster might not be evil. Although Bayona uses conventional CGI for most of the scenes, he turns to animation when The Monster’s stories are presented. This is a unique approach that allows a clear differentiation between the fantasy of Conor’s imagination and the deeper level that occurs in the stories. The animation isn’t the clean, sanitized kind we find in Disney movies; it has a rougher texture and the characters look like half-formed paper cutouts. It’s far more sophisticated than it initially appears. The mix of special effects-enhanced live action and animation makes A Monster Calls one of the more visually interesting films of the year.

Prior to A Monster Calls, Lewis McDougall’s only credit was as Nibs in Pan - a small part in a film no one saw. Thus, his portrayal of Conor will represent his “introduction” to most of the movie-going community and it’s as strong as one can envision. The actor has no difficulty with the strong, dark emotional currents underpinning his character’s journey, which opens in the darkness of one bedroom and closes in another one. He is supported by the ever-reliable Felicity Jones (in a role 180-degrees away from her work in Rogue One) and Toby Kebbell as Conor’s parents. Neeson’s voice is a force in and of itself. The only possible miscasting is Sigourney Weaver, who somehow doesn’t seem right (and her accent slips on more than one occasion).

Movies like A Monster Calls can be hard sells. Dark fairy tales can have trouble finding audiences because the tone and subject matter are too “adult” for young children and older viewers are only attracted to “monster movies” when they’re all about action and mayhem. A Monster Calls is a deeply moving drama that should find favor with viewers of all ages (except the very young). It’s a stunning work of artistry and emotional heft with an ending that speaks as loudly to children, parents, and grand-parents. It’s difficult to shake and impossible to forget.