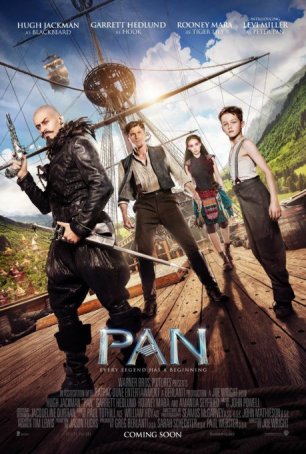 How's a studio to proceed when it wants to do something with a classic, family-friendly property but believes a straightforward remake to be redundant? The solution, as recently explored by several would-be franchises, is to expand the canvas. Maleficent re-told Sleeping Beauty from a different perspective. Kenneth Branagh's Cinderella added subplots and nuance to the familiar tale. And Pan, like 2013's Oz the Great and Powerful, offers a prequel. In the parlance of superhero movies, this is an "origin story."

Over the years, Peter Pan has proven to be a fertile source of animated and live-action fare. In addition to the 1953 Disney cartoon, there have been various other iterations (including multiple adaptations of J. M. Barrie's stage play) and Steven Spielberg's 1991 misfire of a continuation, Hook. In betting that the characters and situations retain the decades-long appeal they have held for worldwide audiences, director Joe Wright and screenwriter Jason Fuchs have dipped into the mythology to arrive at a passable chronology of how Peter (Levi Miller), a World War 2 orphan, became Peter Pan, the flying boy of Neverland. Pan also introduces Tiger Lily (Rooney Mara), Tinkerbell, Mr. Smee (Adeel Akhtar), and - most significantly - Jim (a.k.a. "Captain") Hook (Garrett Hedlund), who starts out as Peter's stalwart friend. 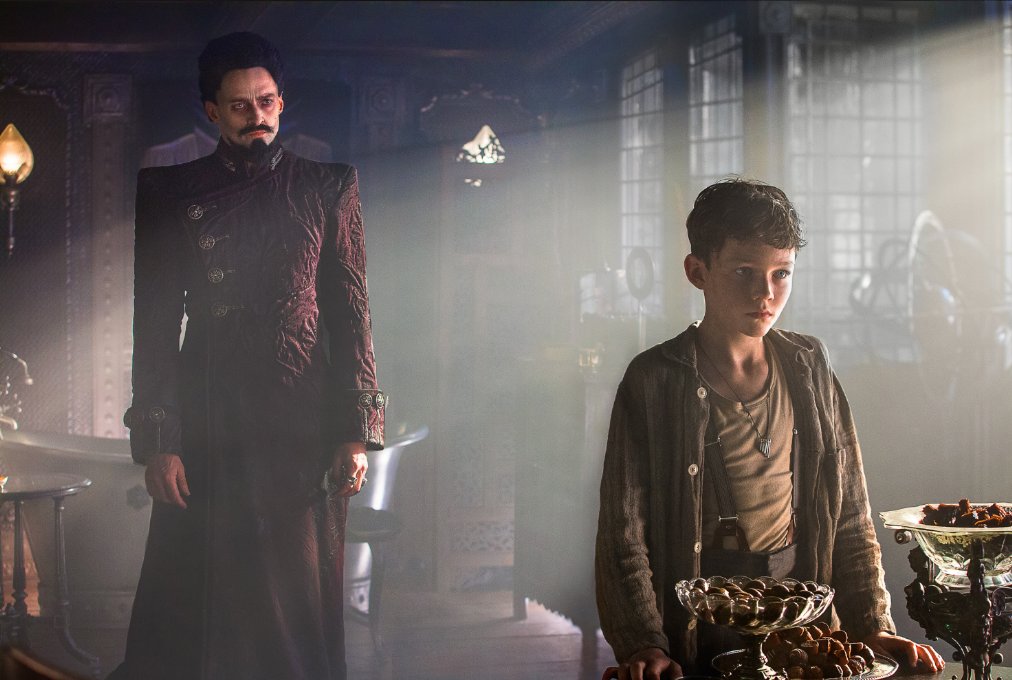 Following a brief prologue showing the infant Peter left on the doorstep of an orphanage, the action jumps ahead about ten years to London during the blitz. The head nun running the establishment is lining her habit pockets by selling boys to a group of opportunist pirates whose vessel sails through the air above rather than on the sea below. After looting the latest round of "precious cargo" (including Peter) from the orphanage, the ship dodges attacks by some spitfires and, faster than the captain can say "second star to the right and straight on till morning", the ship is in Neverland. As Peter quickly learns, the law of the land is decreed by Blackbeard the Pirate (Hugh Jackman), who is engaged in a war with fairies and natives. When he learns that Peter is "the boy who can fly" and therefore might fulfill a prophecy, he becomes intensely interested in the newcomer. Undesirous of the attention, Peter decides his best option is to join Blackbeard's opponents. But escape from the pirates isn't easy even with someone as capable as Jim Hook as an ally.

As a family-oriented adventure film, Pan is adequate, although the darkness of the material may make it unsuitable for younger children. It deviates in numerous ways from the established version of Peter's backstory, although the differences are unlikely to be noticed by those in the target audience. The film features an imaginative landscape, likable characters, and an engaging narrative. It deals primarily with Peter's introduction to Neverland and his attempts to locate his mother (Amanda Seyfried) and avoid the unwanted attention of Blackbeard.

At times, Pan seems more beholden to Pirates of the Caribbean than J.M. Barrie's play. Indeed, Hugh Jackman's portrayal of Blackbeard references - whether consciously or not - Geoffrey Rush's Barbarosa. Garrett Hedlund channels Harrison Ford for his interpretation of Jim Hook not as a seafaring man but as a cocky adventurer who's one part Han Solo and one part Indiana Jones. As Tiger Lily, Rooney Mara is underserved by the script. Despite presenting the character as a fierce warrior princess (and potential love interest for Hook), the filmmakers don't know what to do with her and she slips into the role of a generic companion.

Director Joe Wright, who has a fondness for classic adaptations (he has previously helmed versions of Pride and Prejudice and Anna Karenina), brings an eye for period detail to the WW2 London scenes. In many ways, these are more impressive than the fantasy rich geography of Neverland. The cast is strong and he avoids the so-called "Jake Lloyd syndrome" (in which the poor performance by an important child actor hurts a special effects-laden motion picture). Newcomer Levi Miller is a gifted actor who gives Peter a full range of emotions while making him appealing and (ultimately) heroic. Peter's fear of failure and his faith in his mother form cornerstones of Pan's narrative.

Like most special effects-heavy, big budget motion pictures, Pan is being released in 3-D. The process doesn't add much to the film although there are some nice subtle touches. Whether they're worth the surcharge is a matter of preference. The film fulfills its limited mandate of providing fast-paced adventure and some nice eye candy without adding anything memorable to the tale of The Boy Who Can Fly.