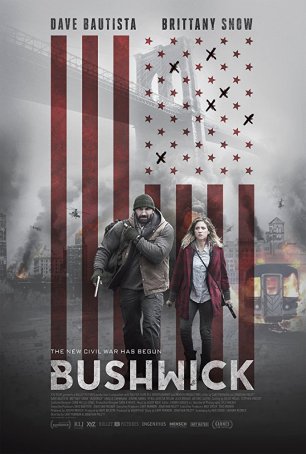 Bushwick is Night of the Living Dead without the zombies. It’s about survival in an urban war-zone, a post-apocalyptic nightmare where the familiar has become unreal and life is cheap. Or at least that’s what the creative team – directors Cary Murnion & Jonathan Milott (who previously made the satirical Cooties) and screenwriters Nick Damici & Graham Reznick – would like us to believe. Unfortunately, because of a variety of missteps, Bushwick never achieves what it sets out to do. It’s undone by a litany of bad decisions and the underlying weakness of the core material.

The movie has sufficiently intriguing hook, and it draws us in. As Lucy (Brittany Snow) and her beau disembark from a subway train in Brooklyn, it becomes apparent that something very bad is happening above ground. Mortars are exploding. There’s gunfire. The boyfriend gets fried to a crisp before five minutes have expired. Lucy flees through streets ripe with lawlessness and murder and when she stumbles into a squalid apartment to escape rapists, it looks like this might be the end for her. She’s saved by Stupe (Dave Bautista of Guardians of the Galaxy), a hulking, melancholy veteran, and the two of them become reluctant companions in the search for a way out of the hell that Brooklyn has become.

Bushwick maintains a certain degree of narrative tension until it starts giving away its secrets. As long as we don’t understand what’s going on, the mystery keeps us involved. However, once the curtain is pulled back to explain that this all has to do with a second American Civil War (and a sneak attack by the South on Brooklyn), Bushwick turns into one big wtf? The backstory, exposed to the light of day, makes no sense even in a modern-day America where bipartisanship no longer exists and racial strife dominates news cycles.

For reasons known only to them, the directors elected to shoot the movie using hand-held cameras. Everything shakes and characters frequently fall out of frame. It looks amateurish. Maybe that’s the intention. Maybe it was a financial decision and they couldn’t afford a steadycam. Maybe the thinking, as is often the case with this stylistic approach, was to emphasize the chaos and immediacy of the situation. Hand-held shooting rarely works (and, when it does, there’s a specific reason why) and Bushwick isn’t an exception. Instead of drawing us in, it distances us. Who wants to be watching a movie while constantly wishing someone would get the d.p. a tripod?

The two leads are “name” actors: Dave Bautista and Brittany Snow. Their capabilities, however, are light-years apart. Snow, best known for appearances in Pitch Perfect and its sequel, is awkward and unconvincing. Bautista, on the other hand, does a solid job selling Stupe as a deeply wounded soldier with PTSD issues and a tragic past. We feel for Stupe. Lucy, on the other hand, is annoying and whiny and her tendency to state the obvious (more an issue with the dialogue than the acting) makes her more irritating than sympathetic. Badly written and miscast, Lucy is Bushwick’s black hole.

The film’s score is credited to “Aesop Rock”. In many instances, it’s missing in action and, on occasions when it’s not, one tends to wish it was. Music is critical to movies like Bushwick; that perhaps isn’t obvious until one encounters a film where it’s mishandled. A great score can paper over a lot of little problems but the one produced for Bushwick amplifies flaws rather than obscuring them.

At least when it comes to how things look, Bushwick succeeds. I never once doubted that we were looking at a post-apocalyptic Brooklyn. The CGI-enhanced helicopter shots are convincing and the ground work never threatened my credulity. The playground is expertly established; the problems are with the players and the story they’re playing in.

Not a lot happens in Bushwick. It’s essentially one long chase as the characters try to make it from Point A to Point B without getting killed. There are side quests along the way involving Lucy’s sister (Angelic Zambrana), a suicidal priest, and a gang with too many weapons and not enough members to use them. The nihilistic ending makes one wonder what the point is. On consideration, however, it becomes evident that this is really just a computer game being played out with real-life actors. A conversion would be seamless, with minimal changes necessary, proving how close cinema and gaming have come to one another. But Bushwick lacks the key element of interaction; this scenario would be significantly more engaging to play than it is to watch.