There’s little doubt that director Christian Gudegast’s primary intention in making Den of Thieves is to emulate Michael Mann’s classic 1995 thriller, Heat. The similarities – from the overall plot to individual story beats – are too close to be coincidental. And, although the peaks of this movie come close to matching Heat’s taut, high-octane approach, Den of Thieves falls short when it comes to elements like narrative coherence, character building, and strength of acting. Gerard Butler and Pablo Schreiber are decent enough performers but they’re no Al Pacino and Robert DeNiro and their interaction lacks the power and gravitas that Mann gave us when he put those two together for the first time on screen. Nevertheless, setting aside the Heat comparison, Den of Thieves delivers an above-average cops-and-robbers heist film. 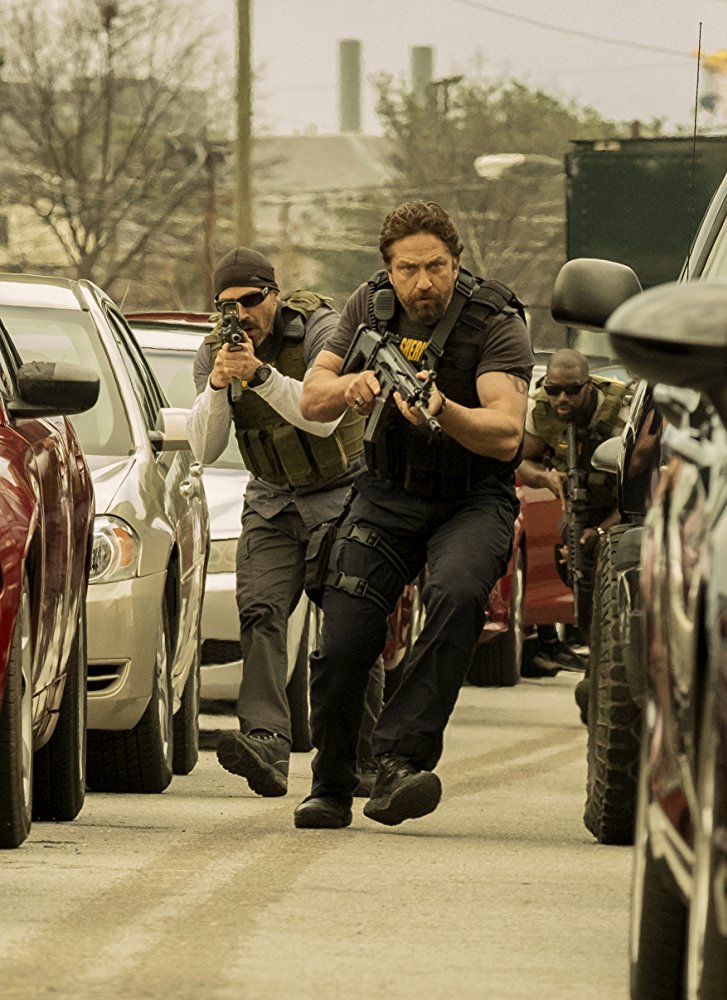 Like Heat, Den of Thieves focuses on a “big score” form the split perspective of the criminals plotting the crime and the police offers attempting to stop it. The former group is headed by Merrimen (Pablo Schreiber), whose small clique of trusted thugs include Bosco (Evan Jones), Levi (50 Cent), and Donnie (O’Shea Jackson Jr.). Merrimen has a history of daring bank robberies but this latest – stealing $30 million from the Los Angeles Federal Reserve – is his most audacious to date. In the ensuing match of wits, his opponent is Nick Flanagan (Gerard Butler), the head of the L.A. Sherriff Department’s Major Crimes Unit. Nick can be a solid investigator when the spirit moves him but he’s unprincipled and prone to moody outbursts and his home life is a mess. Whether these things help or hurt his investigation into Merrimen’s burgeoning plot is an open question that Den of Thieves fails to explore effectively.

Den of Thieves is plagued by small narrative problems. The first is the length – at 140 minutes, the movie feels too long and, following an explosive opening that features an armored car robbery, it drags. Scenes between Nick and his wife, Debbie (Dawn Olivieri), intended to flesh-out his character by giving him a home life, are awkward and unnecessary. They feel disconnected from the rest of the movie, almost as if they were written and included at a later time. The climactic battle is so logistically unlikely that it hurts the movie’s suspension of disbelief. Without offering spoilers, all I can say is that the problem is the location and the potentially high civilian casualty level.

Gerard Butler, who is not known for contained or subtle performances, hams it up mercilessly, turning Nick into a caricature. I was never sure whether Gudegast wanted us to like him or despise him. He’s smart but not as smart as he thinks he is. In contrast, Pablo Schreiber’s Merrimen is too low-key. The guy is more boring than dangerous. Caught between these poles of acting is the movie’s standout, O’Shea Jackson Jr., whose increasingly interesting and nuanced performances are putting him on an acting plateau several levels higher than that of his father (Ice Cube).

Ultimately, the only real drawback to Den of Thieves is its length. The preposterous aspects of the screenplay are common to heist movies and the energy injected into the proceedings by Gudegast helps us overlook those shortcomings. This is an enjoyable genre film that successfully executes most of the tropes viewers expect. The movie may not be the second coming of Heat but it’s good enough to turn up the temperature to “warm.”