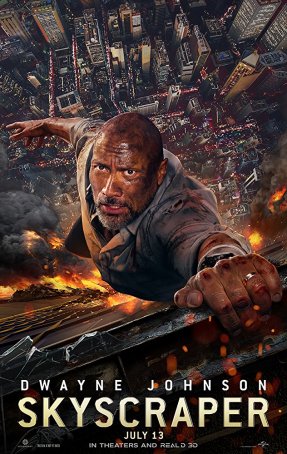 It would be fair to say that Skyscraper does what it sets out to do but the unambitious agenda isn’t something I’m especially interested in watching. A dumbed-down Die Hard with a Towering Inferno infusion, the film exists solely as a showcase to promote Dwayne Johnson as today’s biggest action star. Unfortunately, his charm gets lost in all the fire effects and relentless action. To be fair, some of those scenes are exciting but the jolt is ephemeral. This is an old-fashioned T&A (testosterone & adrenaline) cocktail that seems lifted directly from the ’80s, right down to the children-in-peril angle. It’s not bad or unwatchable but despite the amplitude of the spectacle, the end result is underwhelming.

The first line of defense for a film like Skyscraper is “I came for the action – I don’t care if it doesn’t have a story or if the characters are lame.” Fair enough. For those who feel that way, Skyscraper delivers. There’s no shortage of action. There’s just not much else. A lot of it involves The Rock hanging out of windows near the top of the highest building in the world (described as three times the height of The Empire State Building, which would make it around three-quarters of a mile tall). At one point, he tries a spider-man routine. To add some variation, there are shoot-outs, the most original (and predictable) of which occurs in a high-tech version of a funhouse hall of mirrors.

The story, which is just a few thinly-connected ideas strung together to give the special effects people a framework, postulates that security expert Will Sawyer (Johnson) has traveled with his family – wife Sarah (Neve Campbell), daughter Georgia (McKenna Roberts), and asthmatic son Henry (Noah Cottrell) – to Hong Kong to certify the 4000-foot high Pearl as meeting all the requirements necessary to obtain an insurance policy. However, Will has been set up as a dupe by his “good buddy” Ben (Pablo Schreiber), so when the bad guys stage an attack on the high-rise, it appears that Will might have been complicit. Once a fire breaks out on the 96th floor, Will becomes obsessed with getting into the building because his family is trapped above the inferno – an especially dangerous situation because the fire suppression controls have been disabled. What makes this especially challenging for Will is that, as the result of an injury suffered in a past career, he has only one leg. An advanced prosthetic allows him to walk and run, however, so it’s only an impediment when the screenplay needs it to become one.

One area where Skyscraper skimps is in the villain department. The bad guys are generic assassin types pulled of the Hollywood shelf by writer/director Rawson Marshall Thurber (who previously worked with Johnson in the hideously bad comedy, Central Intelligence). They include Kores Botha (Roland Moller), a mean-looking guy who appears like he would be more comfortable in the “henchman” role except that’s filled by svelte, ass-kicking Xia (Hannah Quinlivan). Their plan doesn’t make a whole lot of sense and, to the extent that there would seem to be less ostentatious ways of achieving their goal – getting a hard drive from multibillionaire Zhao Long Ji (Chin Han) – the script ignores them. After all, there has to be some reason, regardless of how paper-thin it is, for setting up this dire situation. The excuse used in The Towering Inferno won’t fly in 2018.

The Chinese factor is the Elephant In The Room, and not because this was set in Hong Kong. The movie was arguably made more with an international audience in mind than an American one. The Rock is as popular in China as he is in the U.S. and a simple story with lots of visual pizzazz and little in the way of complexity or intelligence is a great way to lure viewers of all nationalities into theaters. As much as Skyscraper sometimes feels like an ‘80s film, it may represent the future. 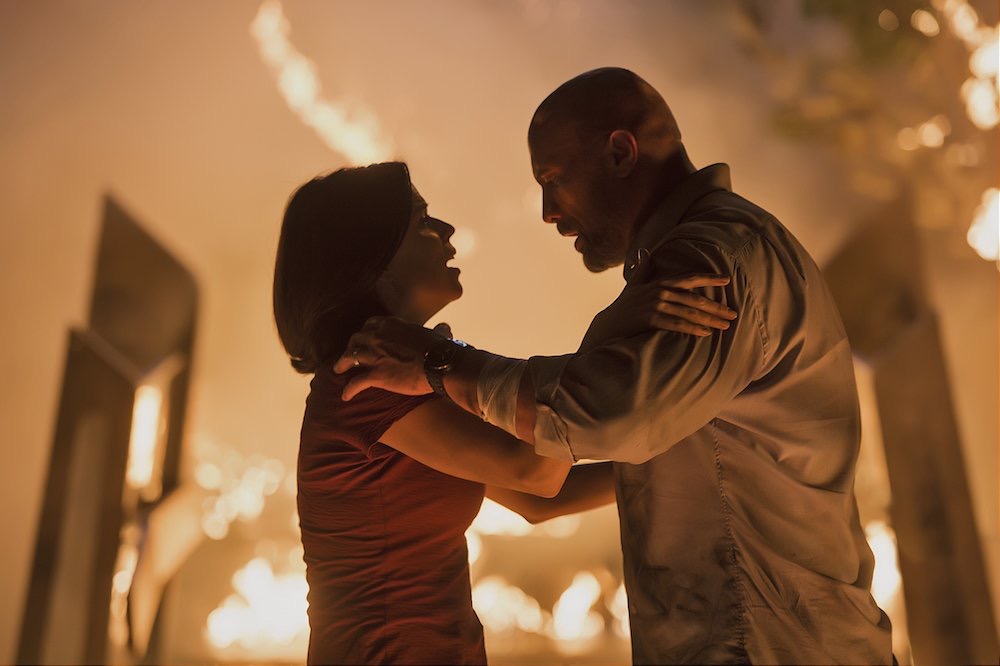 Although 9/11 happened 17 years ago, it’s unsettling to watch Skyscraper and not think about the news footage. For anyone who lived through that day, the images are indelible and this movie, whether intentionally or not, dredges them up. I challenge anyone over the age of 30 to watch Skyscraper and not remember, however briefly, what happened with the Twin Towers. It’s an unpleasant association and feels a little too much like exploitation. Am I being oversensitive? Perhaps, but that was my visceral reaction while watching this movie and I’m sure I’m not the only one to feel that way.

I initially thought the purpose of the artificial leg was to humanize Will. After all, the hulking Rock isn’t exactly an “average guy” no matter how hard he tries to seem like one. However, that turns out not to be the case. Instead, the prosthetic functions a lot like Doctor Who’s sonic screwdriver – it gets him out of all sorts of predicaments when a flesh-and-blood limb wouldn’t do the trick. He can use it to climb back into a building after dangling thousands of feet in the air. He can wedge it between the two sides of a closing sliding door to keep it open. It’s easy detachable, re-attachable, and seemingly indestructible. All Will needs is his leg and duct tape. Like the Mythbusters, he’s in love with that sticky stuff.

Die Hard gave us many of the same elements as Skyrise – a high-rise building, a criminal plot, lots of shooting and explosions, an injured hero – but it also gave us a wise-cracking dialogue, one of the best-ever movie villains, and a nicely twisty screenplay. As big as Dwayne Johnson’s biceps might be, he never emerges from Bruce Willis’ shadow and Skyscraper’s case of Die Hard envy is impossible to miss. Yippee ki-yay, motherfucker!