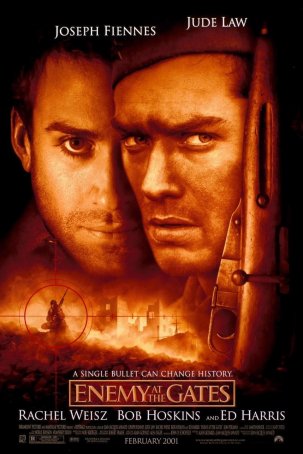 Stalingrad, 1942-43. It was the bloodiest single battle in the known history of war, with more than one million perishing of wounds, disease, and the bitter cold of winter. Like Napoleon a century earlier, Hitler came to Stalingrad with the aim of breaking the spirit of Russia, and, also like the French little general, he was faced with catastrophic losses. The toll taken upon the German army at Stalingrad represented one of the turning points of World War II. Most history experts agree that had Hitler not persisted in trying to take the Soviet city in what turned into a personal contest with Stalin, the Third Reich might have triumphed on its western front.

Like Joseph Vilsmaier's powerful 1993 feature, Stalingrad, Enemy at the Gates elects to view this conflict from the point-of-view of a limited group of characters, rather than attempting to tackle the battle in an epic format. The film takes actual historical figures and imbues them with traits that allow their private struggle to mirror the overall conflict. However, as interesting as some of the ideas underlying the film are, and as technically adept as the production is, I had a hard time liking Enemy at the Gates. There's an emotional coolness to the picture and the characters are kept at a distance. There's also a lack of dramatic tension. The movie always moves in the direction of an inevitable conclusion, with minimal suspense along the way. As fascinated as I was by the historical backdrop against which the struggle occurs, I found it difficult to care one way or another about which characters lived or died. 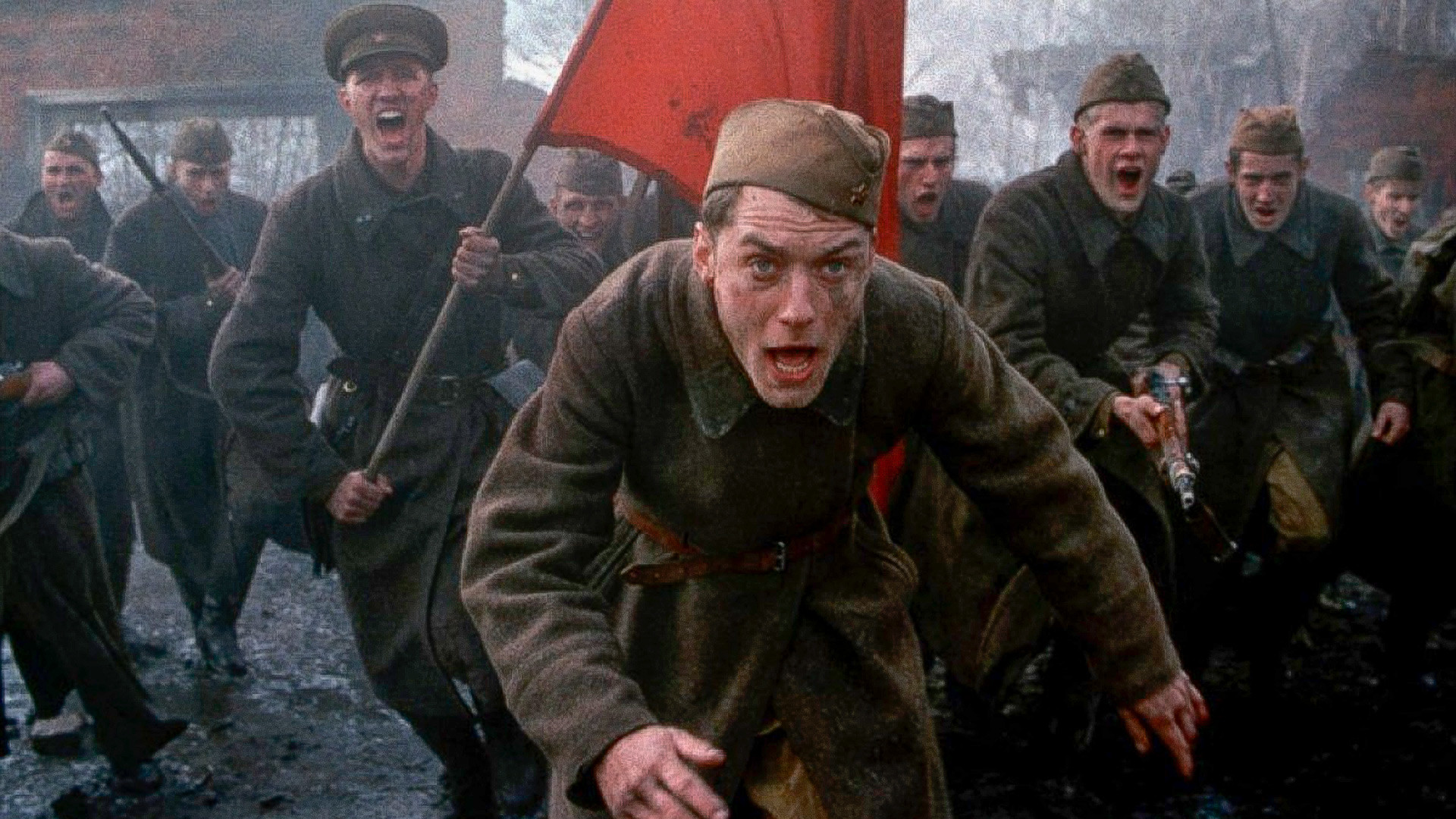 The movie opens in September 1942. The Germans and Russians are engaged in a fierce battle for control of Stalingrad, and both sides acknowledge that, from a propaganda standpoint, the city is the key to whether the Soviet Union stands or falls. Into this conflict comes Vassily Zaitsev (Jude Law), a rural farm worker who has arrived in Stalingrad as a soldier. He quickly shows his mettle as a sharpshooter, and a local political officer, Danilov (Joseph Fiennes), works to develop his legend to mammoth proportions. As Danilov argues to Krushchev (Bob Hoskins), who has come to Stalingrad to oversee the city's defense, the Soviet Union needs heroes to boost morale, and he has decided to build Vassily into one. The Germans counter by bringing in their own renowned sniper, Major Koenig (Ed Harris). Soon, Vassily and Koenig are locked in a life-and-death struggle that is played out in the ruined streets of the city. Meanwhile, Vassily and Danilov have both fallen in love with Tania (Rachel Weisz), and their rivalry over the woman threatens their friendship. 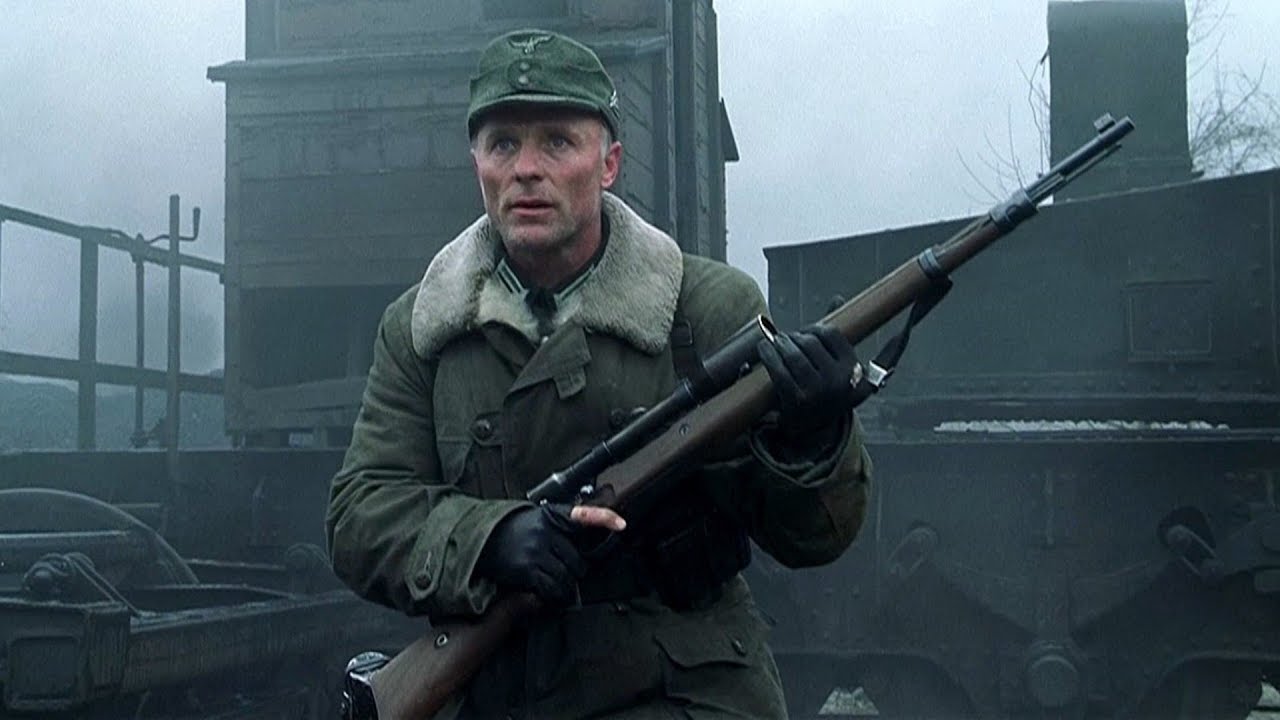 Enemy at the Gates has all the elements necessary for a compelling war film, but the lack of character depth coupled with director Jean-Jacques Annaud's detached style, makes watching this movie an uninvolving experience. There were times when I admired Enemy at the Gates, but I was never really drawn into the story. The cat-and-mouse games between Vassily and Koenig, which form the movie's backbone, are not suspenseful. Instead, they feel perfunctory and obligatory. We realize that nothing is going to happen to resolve the conflict between these two until the end of the movie, so all of the in-between shoot-outs are padding. The various subplots, which have been added to give the story additional meat, are predominantly underdeveloped. The most interesting of these - Danilov's building up of Vassily's reputation (followed by a hurried attempt to tear it down) - is presented almost as an afterthought. The use of propaganda to fashion heroes is potent stuff and deserves a more comprehensive exploration than what Enemy at the Gates offers. In addition, the romantic triangle between Vassily, Danilov, and Tania is written and developed on the level of a soap opera.

The battle sequences, especially those with the bombs bursting in the air above Stalingrad, are impressive, as is the attention to detail. There's a little Saving Private Ryan in some of the early sequences. As soldiers are being transported across the Volga River to Stalingrad, their boats are strafed by Luftwaffe aircraft. Dozens are killed or injured, and those who try to escape by jumping overboard are shot by their own commanders. The verisimilitude of the film's battle re-creations is enhanced by a grim atmosphere (accomplished largely through dim lighting, an abundance of browns and grays, and a lack of bright color) but it doesn't extend to the characters, none of whom are more than shadows of real human beings. The epilogue, which has a tacked-on feel, is out-of-place and designed largely to placate audiences distressed by the film's downbeat tone. 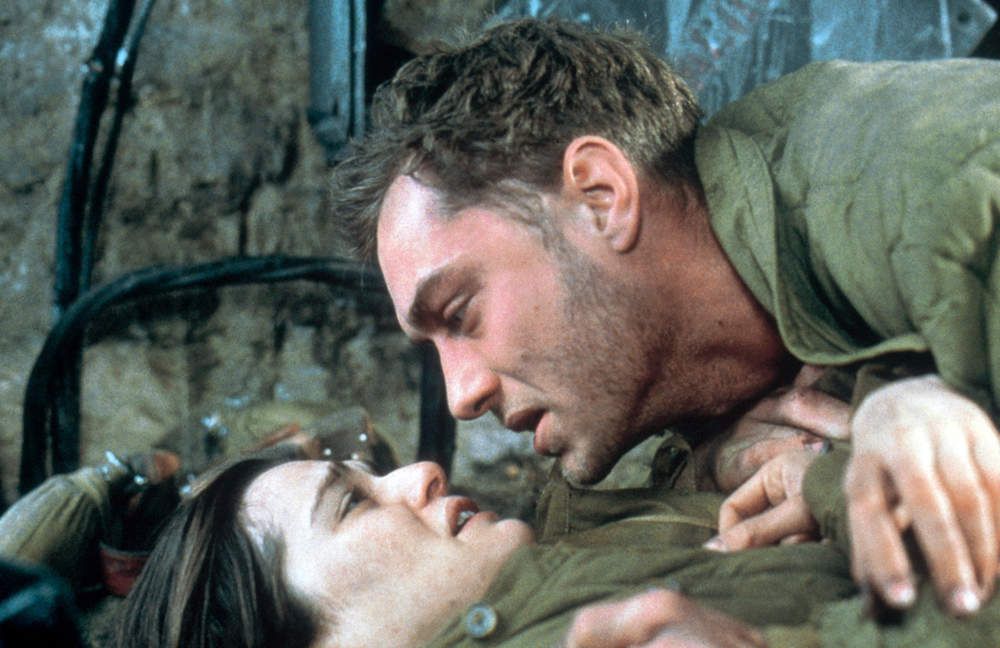 As Vassily, Jude Law does a solid job re-creating a conflicted war hero who doubts his own prowess with a rifle when faced with a superior adversary, but there's little humanity in the portrayal. There are things to appreciate about Law's performance, but he's working with a thin and sketchily drawn character. Joseph Fiennes is overwrought and unconvincing. As Major Koenig, Ed Harris brings a commanding presence to the screen, doing what he can with an underwritten part. Finally, there's Rachel Weisz, whose Tania may be the only individual in the film for whom we evolve a reasonable sense of sympathy.

Director Jean-Jacques Annaud is not known for developing emotionally rich cinematic tapestries. His films often come across as visually stimulating but aloof. Enemy at the Gates falls prey to those characteristics. The movie squanders too many opportunities. For those who appreciate history and want to understand a little more about what went on during the battle of Stalingrad, I recommend Vilsmaier's movie. Enemy at the Gates hints at, but never achieves, greatness. Instead, for all of its impressive technical qualities, it ends up as a mediocre and mostly forgettable war film.