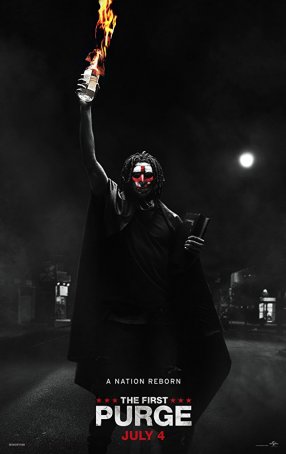 I feel pretty safe saying The First Purge isn’t going to be a big hit with Donald Trump’s base. With a script that feels more like an anti-Administration screed than a fully fleshed out film, this movie is so overtly “progressive” as to function almost as a self-parody. All the villains are white (including a bunch of AK-47-wielding, card-carrying, hood-wearing KKK members) and all the “good guys” are people of color. Genocide is touted as a legitimate form of population control. And media manipulation is part of the master plan. The cynic in me wonders whether this is less about director Gerard McMurray and/or screenwriter James DeMonaco’s personal beliefs than it is about what they think will play best at the box office with the core demographic. Blumhouse knows its audience which is why The First Purge is light on backstory and details and strong on adrenaline and testosterone.

The First Purge is actually the fourth Purge. At the end of the previous installment, 2016’s The Purge: Election Year (which may have originally been designed to conclude the series), The Purge was ended. As a result, it would have been difficult to move forward. However, greed demanded another movie, so the prequel approach was invoked. The First Purge takes us back to how it all began with a limited “experiment” confined to Staten Island, N.Y. (the so-called “forgotten borough”). For 12 hours, criminal laws are suspended and people are permitted to kill, rape, steal, etc. without fear of legal reprisal. During this period, Staten Island is isolated. Residents who remain are paid $5000 and anyone interested in participating is fitted with special video recording contact lenses and given the promise of greater recompense the more they do.

The architect of the experiment, Dr. Updale (Marisa Tomei), believes that a purge is necessary to keep society in balance, but she needs real-world data to be sure. The President’s Chief of Staff, Arlo Sabian (Patch Darragh), has invested considerable political capital in the venture and has a vested interest in making it work, even if he has to import mercenaries into Staten Island to seed the violence and increase the body count. While the politicians work their devious plots to make America great again, the people “on the ground” suffer. These include a hard-working young woman, Nya (Lex Scott Davis), and her good-hearted brother, Isaiah (Joivan Wade), who get caught up in the violence and become trapped in a high-rise building that is ground zero for the White Supremacist attack. Coming to their rescue is drug kingpin and Nya’s ex-boyfriend, Dmitri (Y’lan Noel), who arms himself like Rambo and charges to the rescue. Only in a Purge movie could an unrepentant drug dealer be a hero.

As with the other Purge movies, the central premise is bigger than any of the ephemeral characters populating the screenplay. As a plot device, The Purge is creaky at best and, given an opportunity to express how the country could accept this “bridge too far,” The First Purge punts. Although there are a few faux news coverage clips that attempt to put things into context, they are frustratingly incomplete, emphasizing that the filmmakers aren’t interested in world-building. They do the bare minimum necessary to construct the sandbox then throw in a bunch of two-dimensional characters and let them kill each other.

Boiling off the divisive political subtext and its associated sociological aspects, what we’re left with is an old-fashioned exploitation thriller. Seen in that context, The First Purge isn’t half-bad. It’s competently made, delivers its share of thrills and edge-of-the-seat moments, and gives the audience an opportunity to stand up and cheer. The blood flows freely and, for the most part, the low-level bad guys get their comeuppance. When it comes to messaging, however, the movie stumbles. Although the intention may be to show that the response to oppression is resistance, The First Purge ironically preaches disempowerment. After all, when all is said and done and the dust settles, the government has won. The Purge will go forward. We know that based on the three other movies. Maybe this film isn’t as anti-Trump as I initially supposed.