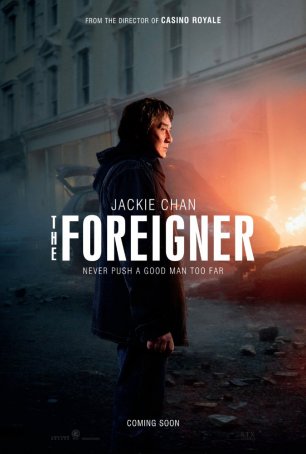 For Jackie Chan, The Foreigner represents a change of pace. Best-known for light-hearted action/comedies, Chan has never before descended to the level of darkness required by this film. In this thriller, directed by James Bond filmmaker Martin Campbell (Goldeneye, Casino Royale), Chan plays a grieving father seeking revenge. With his ex-Navy SEAL training, he is a perfect machine for vengeance and single-minded determination makes him seemingly unstoppable. Although Chan is given an opportunity to show off his martial arts skills (given his age, however, one has to assume he no longer does all his own stunts), the tone is somber. Absent is the playful, Keaton-esque quality so often used to frame the actor’s fight scenes. This role also gives Chan an opportunity to show a degree of dramatic acting we have not previously seen from him.

Although parts of The Foreigner echo the likes of First Blood and Point Blank/Payback, there’s more going on here than simple revenge. The overarching narrative, based on Stephen Leather’s 1992 novel, The Chinaman, involves a terrorist bombing in London and fractious negotiations between government official Liam Hennessy (Pierce Brosnan), a former IRA stalwart now working to maintain the peace from his office in Belfast, and his former compatriots. The movie has some difficulty with the IRA aspect of the story. When Leather wrote the book, the Provisional IRA was active. Now, 25 years later, The Troubles have ended so a “new” IRA had to be invented to endanger the current stability. 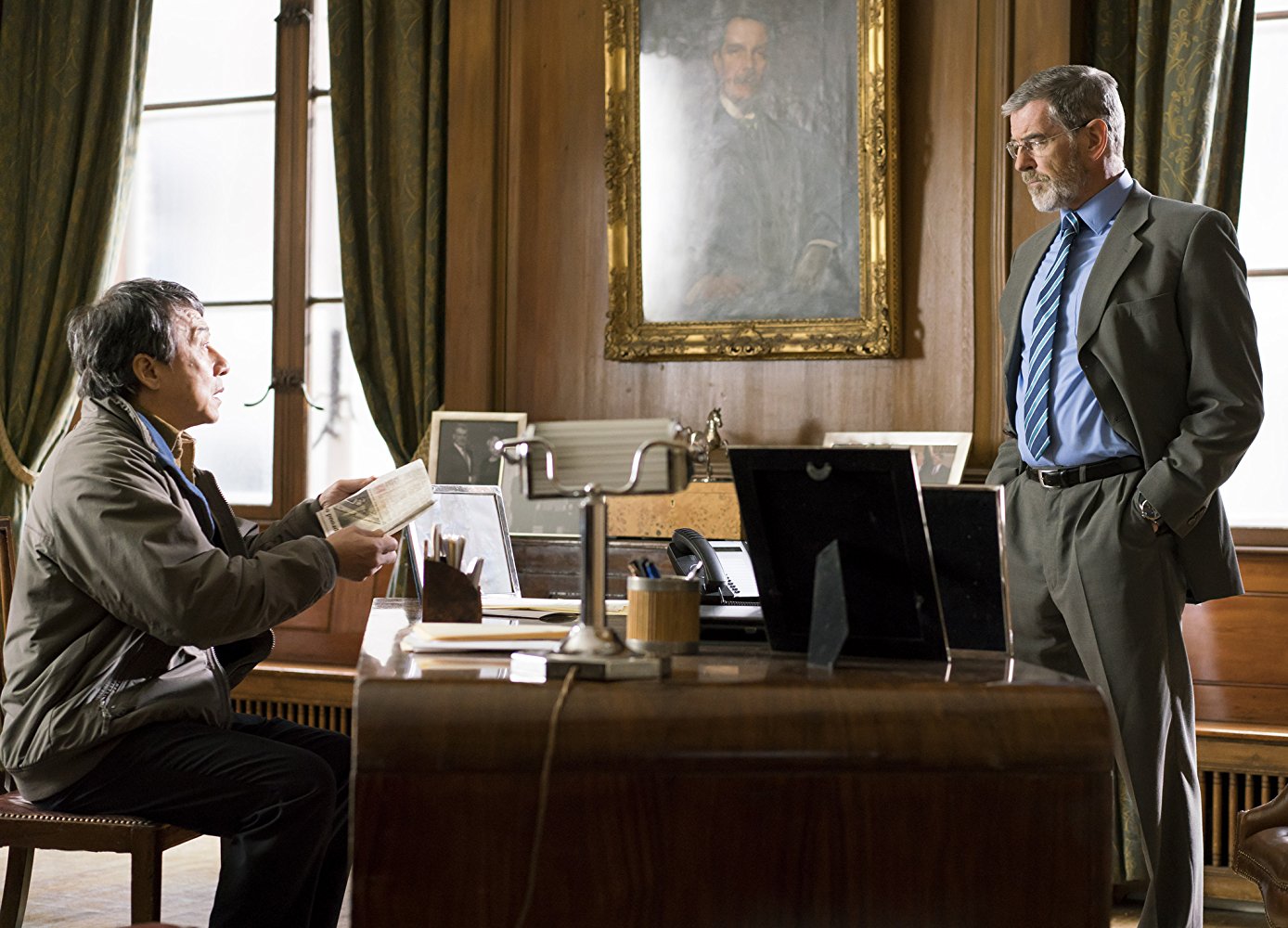 Quan Ngoc Minh (Chan) becomes involved in this international situation when his beloved teenage daughter, Fan (Katie Leung), is killed in a bombing. Devastated, Quan begins a peaceful but persistent campaign to learn from the police who the bombers were. Commander Richard Bromley (Ray Fearon), who is in charge of the investigation, sees Quan as a nuisance and sends him away. Learning from a TV news program that Hennessy is handling the investigation in Northern Ireland, Quan makes the trip. His meeting with Hennessy is no more satisfying than his interaction with Bromley and, pushed to the brink by stonewalling, he takes decisive action. After a series of swift, brutal activities, he dispels the notion that he’s nothing more than a disheveled old “Chinaman”.

The political aspects of The Foreigner are fairly complicated and an understanding of the recent history of Ireland would be helpful in sorting things out. (In the U.K., everyone knows the backstory but that probably isn’t true in the United States.) At times, it almost seems as if there are two separate movies running in parallel. There are lengthy segments when Quan is off-screen as the story concentrates on Hennessy’s machinations and motivations. Likewise, there are times when we follow Quan almost exclusively as he sets up and executes traps. He wants one thing – the names of the people responsible for his daughter’s death – and, believing Hennessy to be in possession of that information, he makes the former terrorist his target. 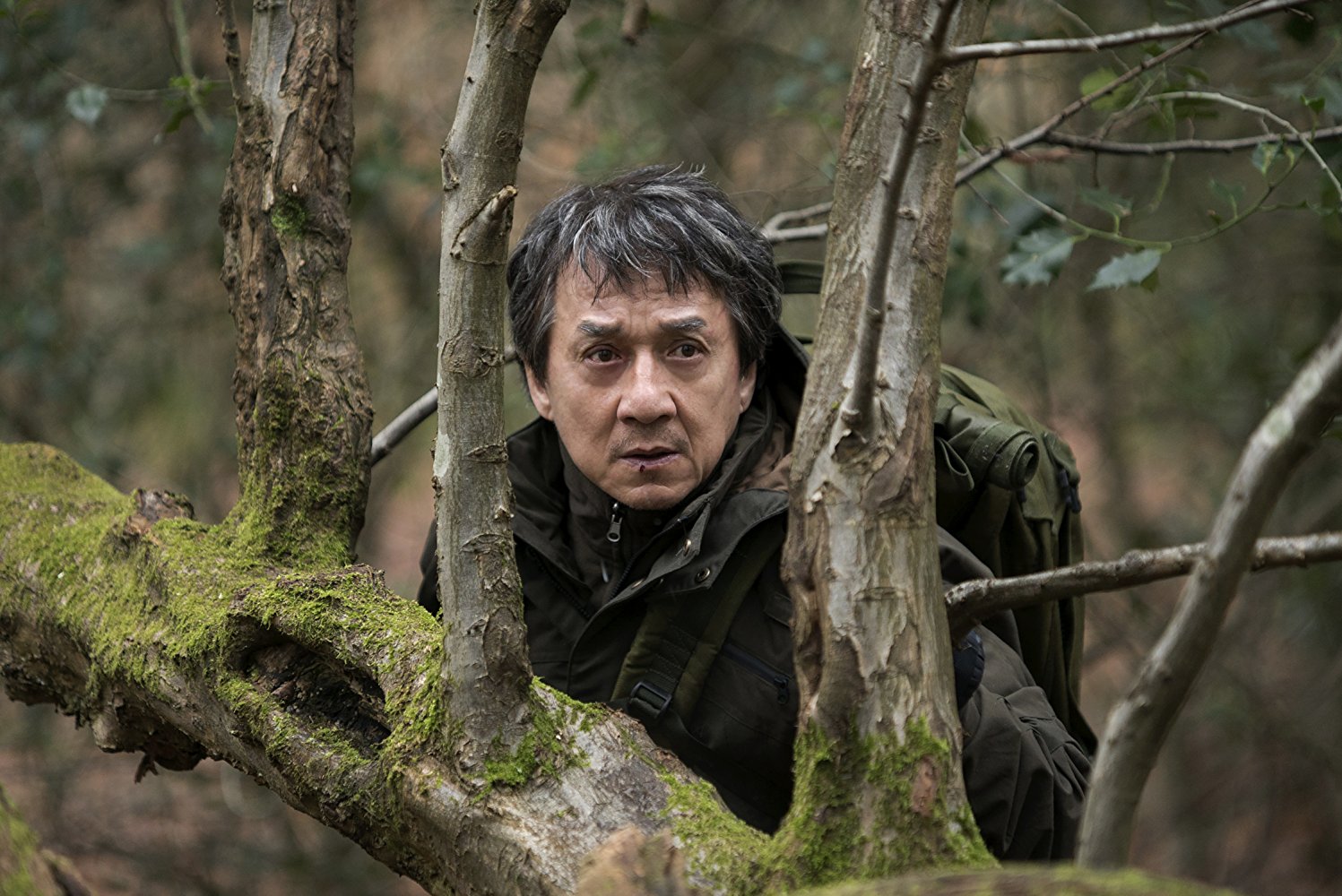 The Foreigner delivers plenty of action and showcases the fact that, even at age 63, Chan still retains his physicality. However, perhaps the most remarkable aspect of Chan’s performance has little to do with stunts and martial arts. Early in the film, following Fan’s death, there’s a quiet scene in which Quan wanders around her room, looking at stuffed animals and smelling a dress to catch a last, lingering scent. It’s a heartbreaking moment and Chan plays it perfectly. Later in the film, as the brutality of his actions escalate, we remember this scene and understand the pain that motivates him. This is much more than most thrillers give us.

Pierce Brosnan, who previously worked with Campbell on Goldeneye (the movie that introduced him as 007), is credible as the aging hard-liner turned diplomat. Brosnan plays Hennessy as conflicted and complacent, enjoying the attentions of a much younger mistress (Charlie Murphy) while largely ignoring his bitter wife (Orla Brady). He is unprepared for the wave of terror unleashed on his watch and, when he is being stalked by Quan, he is forced to call in his special forces-trained nephew (Rory Fleck Byrne) to track the ex-Navy SEAL.

In terms of overall visceral impact, The Foreigner is perhaps not as satisfying as a John Wick or the aforementioned Payback because it’s a more serious, complex movie. Nevertheless, it’s well-made, nicely paced and accomplishes what we expect from this sort of film. The violence (of which there is a fair amount) seems organic rather than gratuitous and parts of the story are accompanied by a surge of genuine emotion. The most compelling reason to see The Foreigner is Chan, whose step into new territory reveals things we haven’t previously seen from him.