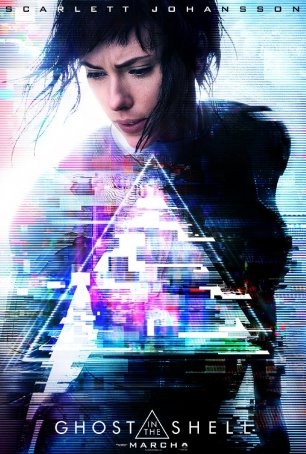 As a noisy, CGI-saturated spectacle, there’s no arguing that Ghost in the Shell gets the job done. Every cent spent on the movie appears to have made it into the final cut – an indication that the actors probably did most of their work in front of a green screen. There’s probably not a scene in the entire production that didn’t require some sort of computer manipulation. However, outside of providing about 105 minutes of eye candy, this sound and fury doesn’t signify a lot. Combined with some other commercially-based decisions, it serves to mute the story’s emotional and cerebral aspects and will leave some viewers (especially those familiar with the source material) unsatisfied. Ghost in the Shell is visually compelling but tone deaf.

Genre fans will know immediately that this new iteration is based on the classic manga and its 1995 anime counterpart. A non-animated adaptation has been talked about since the late 1990s but it took 20 years to get it from pre-development to post-production. There’s always an expectation that, when a project gestates for so long, the result will be amazing. Ghost in the Shell falls considerably short of those lofty aspirations and my sense is that the long-standing fans will be the most put-off by the new version. Like Beauty and the Beast, this live action reworking of a beloved animated title is more of a curiosity than a necessity and offers little beyond an inferior rehash of something that didn’t need to be revisited. 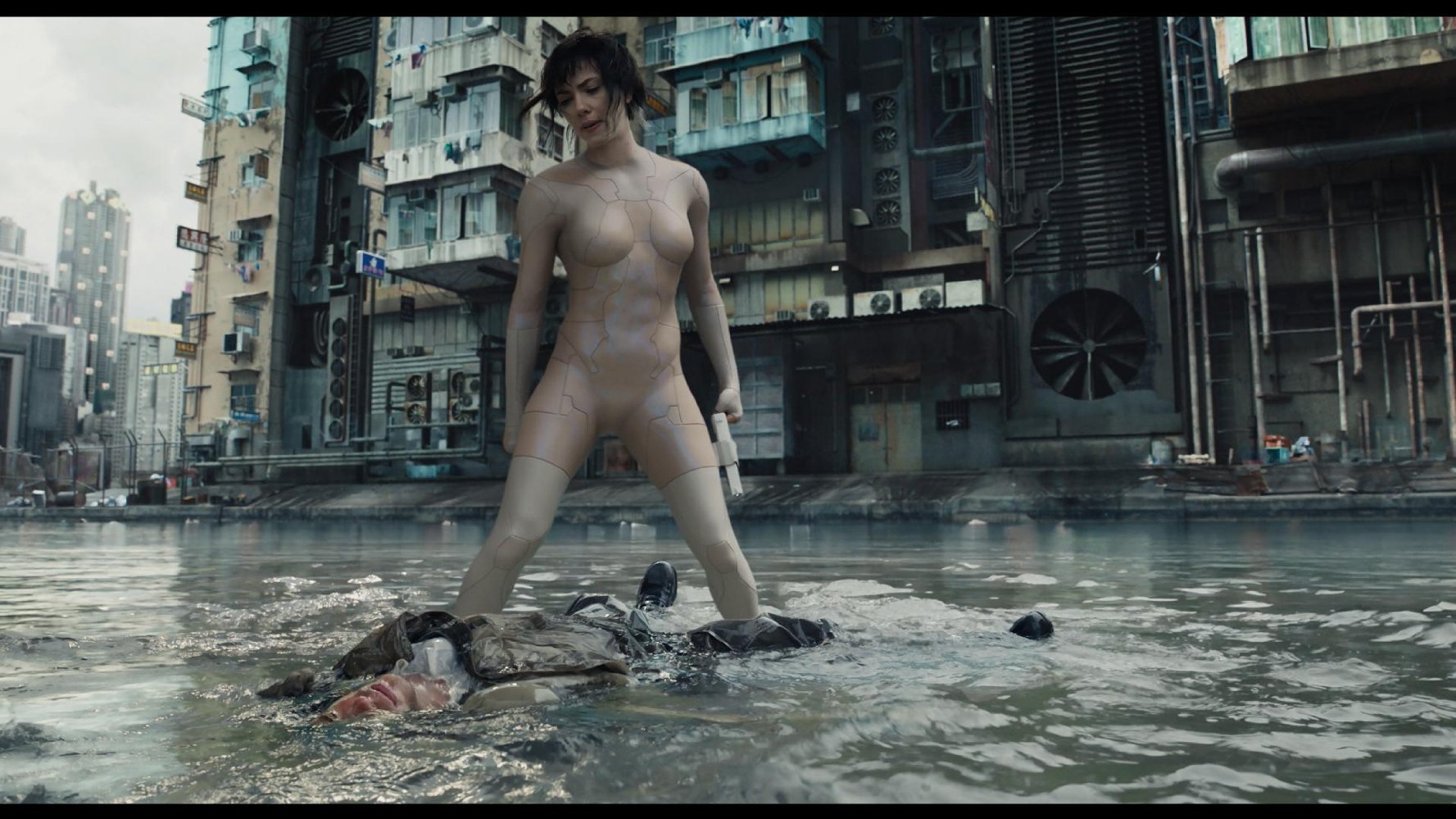 Decisions made to transform Ghost in the Shell into a palatable entree for a mass-market global consumption prove to be its undoing. Although it’s possible to include high-octane action scenes in a movie with a high IQ (Logan being a prime recent example of doing this right), director Rupert Sanders (Snow White and the Huntsman) falls into the trap of making the fights and chases the focal point of the production; the rich and complex narrative becomes a clothesline upon which the action can be hung. The visual razzle-dazzle also detracts from the thematic and emotional depth. As a result, Ghost in the Shell sacrifices its ability to touch the heart and tantalize the intellect in favor of provoking a largely visceral response.

In a brief prologue, we are provided with a skeletal explanation of how Major (Scarlett Johansson) is about to become the first in a new breed of technological creations – a human brain implanted into an advanced robot body. Her doctor-creator, Dr. Ouelet (Juliette Binoche), sees her as a “miracle.” Cutter (Peter Ferdinando), the businessman who provided the financing, calls her a weapon. One year later, Major has stabilized (although her pre-transplant memories are evasive) and is working on a government anti-terrorist squad led by the inscrutable Amaraki (“Beat” Takeshi Kitano), a Japanese “M”. Major and her partner, Batou (Pilou Asbaek), are called to take action when sensitive information is compromised and, while following they cyber trail back to its originator, an entity named Hideo Kuze (Michael Carmen Pitt), Major learns disturbing things about her past and the plans of her handlers for her future. 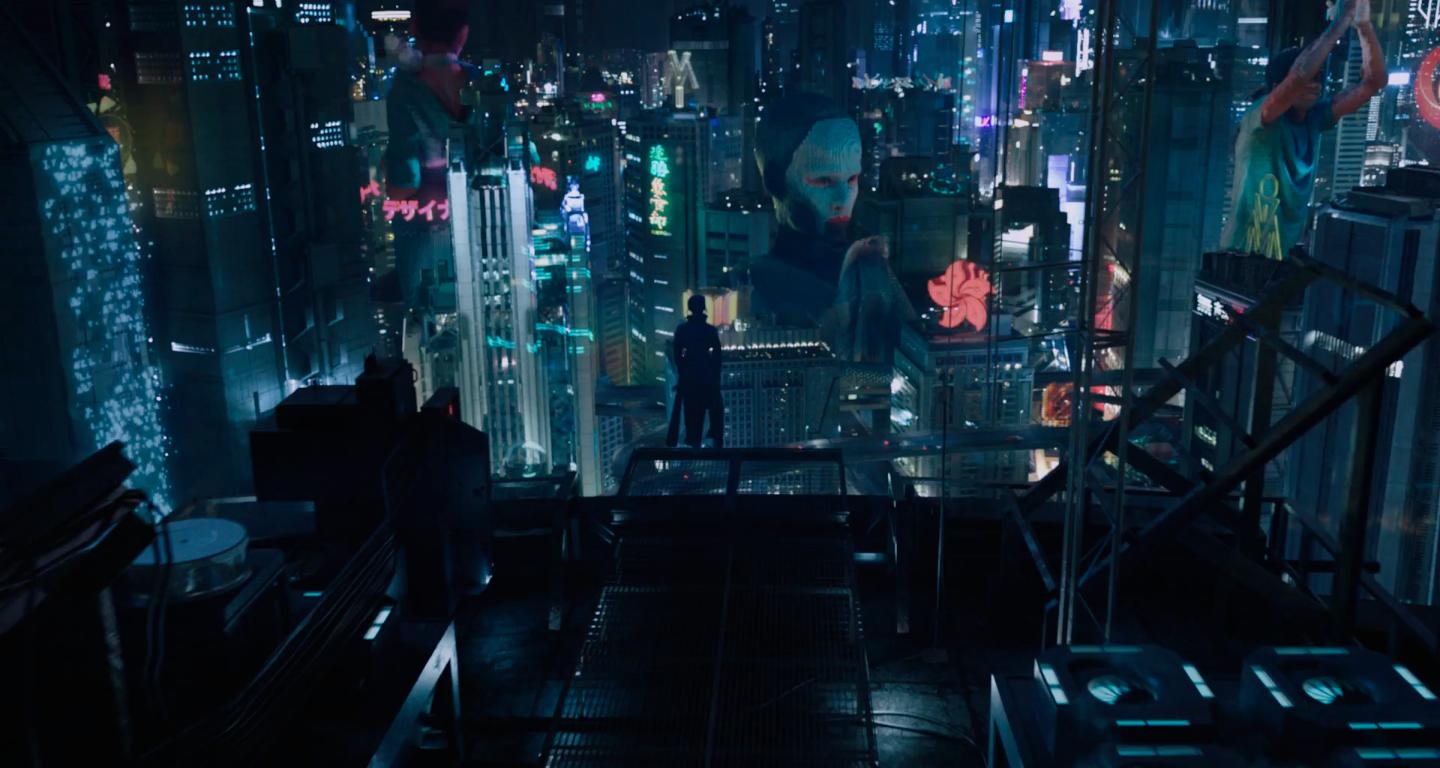 Watching Ghost in the Shell, I couldn’t help contrast the differences in tone and intent with Ex Machina, which also dealt with cybernetic science fiction concepts. Ex Machina wasn’t afraid to challenge the viewer by putting issues involving advanced tech ethics front-and-center. In Ghost in the Shell, these are shunted to the side, largely out of fear that mass audiences would be (a) confused, (b) bored, or (c) both. In another box office-driven concession, Ghost in the Shell has been saddled with a PG-13 rating. If ever a film deserved an R, this is it. This should be an adult movie with an adult aesthetic to go along with its adult themes. Instead, it has been morphed into a teen-friendly action-first form of big budget escapism.

The film’s lead actress, Scarlett Johansson, is miscast. This has nothing to do with her ethnicity; she simply fails to provide a convincing portrayal. Perhaps it’s not her fault; it’s possible that all the green screen work and CGI would defeat any actress. She doesn’t have any problem with the physicality of the role (as would be expected from the woman who plays Black Widow), but she has trouble with the quieter, more emotionally charged moments. Strangely, she almost seems to be channeling her performance from Under the Skin.  Her co-stars include Dane Pilou Asbaek (who has appeared in Game of Thrones and previously joined Johansson in Luc Besson’s Lucy) and celebrated Japanese actor/director Takeshi Kitano. Michael Pitt and Peter Ferdinando play a pair of uninspired villains and the best thing that can be said about Juliette Binoche’s part is that she stays around longer than she did in Godzilla.

To be fair to the movie, it does what it sets out to do and it is never dull or sleep-inducing. The pace is as frenetic as the action sequences and there are enough snippets of the moral/ethical quagmire at the heart of the dilemma that the essence of Ghost in the Shell isn’t completely lost (merely partially obfuscated). It’s easier to recommend this to someone unfamiliar with the source material because, if you don’t know what’s missing, it will be easier to go for the ride without an awareness that there’s more potential to the story that what’s being brought out.