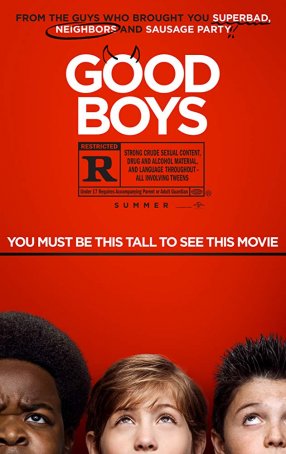 Considering his involvement in Superbad, it’s not surprising to see Seth Rogen’s name in the list of Good Boys’ producers. In terms of intent and tone, the films have a lot in common, even if the latter production focuses on characters about six years younger. Undoubtedly, some viewers will be offended by the levels of profanity, vulgarity, sexual content, and drug use to be found in Good Boys, but the approach of writer/director Gene Stupnitsky and his co-scribe Lee Eisenberg isn’t far off base for the reality of 12-year olds. The film gets frequent laughs from its raunchiness but, underneath it all, there’s an emotionally resonant story of how children confront the demons of youth that guard the gates to adolescence.

Kids swear. They do it awkwardly but with bravado, using profanity as a rite of passage. There’s nothing unrealistic about the salty language found in Good Boys; go to playground where a bunch of sixth-graders are playing and eavesdrop. The main characters’ perspectives of sex are typical of boys their age: a mixture of curiosity, misinformation, and facts. They don’t know enough to know they don’t know enough. There’s something endearing about the things they get wrong. Finally, the kids operate from the perspective that drugs are bad. They don’t use them. In fact, they give them to the police. Good Boys’ perspective of the “tween” experience is consistent: Eisenberg and Stupnitsky remember what it’s like to be on the cusp of junior high school and they use those memories to inform the lives of their characters. Things are exaggerated for comedic effect but behind each laugh is a kernel of truth. Many of the jokes wouldn’t be funny if this wasn’t the case. Good Boys isn’t trying to be a Porkys for 12-year olds. It’s more like Fast Times at Ridgemont High without the nude scenes. For kids near the upper end of elementary school, kissing is a source of consternation. In The Princess Bride, Fred Savage (11 at the time) expressed dismay that his grandfather’s tale might be a “kissing story.” In Good Boys, Max (Jacob Tremblay) is on a quest to make it to a “kissing party,” thereby giving him a chance to pucker up and brush lips with his true love, Brixlee (Millie Davis) – assuming she gives her consent, that is. One problem: Max and his two best friends, Lucas (Keith L. Williams) and Thor (Brady Noon), don’t have a clue about kissing and their Google search turns up some disturbingly unhelpful information. They decide that the best thing to do would be to spy on a teenage neighbor, Hannah (Molly Gordon), when she’s with her boyfriend. To do this, they “borrow” Max’s father’s “not a toy” drone. Things don’t go as planned – Hannah breaks up with the boyfriend (so no kissing) and she and her bff, Lily (Midori Francis), spot the drone and swat it like a giant dragonfly.

In order to go to the kissing party, Max has to avoid being grounded. That means getting the drone back from the girls. Not an easy prospect, although it becomes easier once they have something to trade – the girls’ “Molly” is in a purse they abscond with – but that’s only the beginning of a series of complications that would have had the late John Hughes smiling. Each of the boys is given a personal goal to fulfill as part of the overall quest. For Max, it’s the concrete objective of getting back the drone before his dad (Will Forte) returns from his business trip. Lucas is coping with the news that his parents are divorcing. Despite their assurance that their separation has nothing to do with him and they still love him, he is plagued by doubts and needs the solidity of his friendship with the other two boys during this time of crisis. Thor, meanwhile, struggles with the power of peer pressure and decides that acting out-of-character might be the way to restore his reputation as a badass.

The three age-appropriate performers show uncommon maturity in creating a trio of believable characters. Jacob Tremblay continues to build on a filmography that already includes Room and Wonder. Keith L. Williams comes to Good Boys with an impressive TV resume. Brady Noon’s long association with the HBO series Boardwalk Empire makes him no stranger to productions featuring strong adult content. There’s as much chemistry among them as there was in the group featured in Rob Reiner’s 1986 work, Stand by Me.

Although I didn’t find Good Boys to be exploitative, neither do I believe the content is appropriate for children. It comes by its R-rating honestly. The movie’s charm comes from its ability to conjure up the innocence of the twilight of childhood; its humor arises from the adult perspective of certain not-so-innocent things. Good Boys may not be for everyone but my funny bone was tickled.