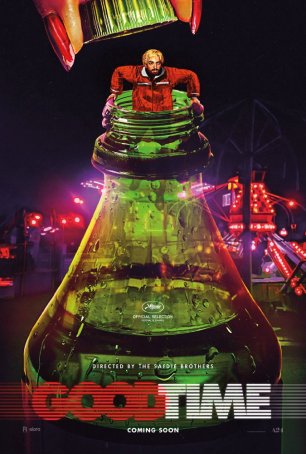 When considering the meaning of the title Good Time, I was reminded of Dickens: “It was the best of times, it was the worst of times…” In the case of these characters, the former doesn’t apply. Good Time is an atmosphere-driven thriller, where narrative takes a backseat to mood and aesthetic. The momentum is fueled by the tension inherent in having such a combustible character in the forefront. Connie (Robert Pattinson) is one of those individuals who constantly seems to be on the edge of a violent explosion and that potential makes watching Good Time a frequently exhausting experience.

Every aspect of Good Time’s production was selected with the goal of keeping the audience in a state of escalating suspense. This isn’t conventional Hollywood-horror/thriller “suspense” but something more primal. Co-directors Ben & Josh Safdie often employ hand-held shots to provide a more intense, less polished perspective. Although it’s possible to argue that the technique is overused, this isn’t an all shaky-cam film – there are numerous helicopter shots, static ground-level shots, and conventional close-ups. Queens, New York, although shown primarily after sunset, comes alive in all of its sometimes-ominous, sometimes-neon glory. The cacophonous score, credited to Daniel Lopatin (a.k.a. Oneohtrix Point Never), is loud and unnerving and enhances the unease that the filmmakers strive to craft.

The prologue is an indicator of things to come. It’s a simple set-up, with a psychiatrist (Peter Verby) running through a series of tests on an agitated patient, Nick Nikas (Ben Safdie). The acting of Safdie, in conjunction with his shot selection, causes us to wonder whether Nick might lash out at the old, fragile man asking the questions. The way the scene ends is a little surprising and, considering what we may have been expecting, tame.

Good Time’s main storyline involves a poorly-executed bank robbery committed by the brotherly team of Connie and Nick. The former is the “mastermind” while the latter, who is severely mentally handicapped, is along for support. After things go wrong, Connie and Nick become separated. Nick is captured and taken to Rikers Island while Connie escapes. He immediately begins scheming how to get Nick out; his primary objective is to raise enough money for bail. At first, he tries to bilk his girlfriend, Corey (Jennifer Jason Leigh), out of it. When Connie learns that Nick is being held in a hospital following injuries suffered in an altercation, he decides to “rescue” him – a scheme that is surprisingly successful until he discovers that the man he liberates is a complete stranger.

Perhaps the most remarkable thing about Good Time is the performance of Robert Pattinson, who is unrecognizable here as the hunky, sparky vampire who caused so many tween hearts to go pitter-patter during Twilight and its sequels. As with his co-star from that series, Kristen Stewart, Pattinson has shrugged off mainstream fare and moved into the indie world. Good Time represents a showcase of abilities that were obscured for years by his participation in the mega-successful, mega-dumb Stephanie Meyer-inspired franchise. Pattinson’s portrayal of the single-minded Connie, who will do anything and use anyone to affect a reunion with his brother, is credible and scary. He recalls Al Pacino from the ‘70s (Dog Day Afternoon in particular). Connie is a fully realized character even though we know next-to-nothing about his backstory. Pattinson is capably supported by his director, Ben Safdie, as the dim Nick; Jennifer Jason Leigh as the older woman who is inexplicably attracted to Connie; Buddy Duress as the disfigured Ray, the man Connie accidentally rescues; and Taliah Webster as 16-year old Crystal, a girl manipulated by Connie.

Most movies about dumb criminals committing poorly-conceived crimes are turned into comedies or at least quasi-comedies. There’s nothing funny about Good Time nor are we encouraged to laugh. The movie is as dark as the nighttime setting. Although not designed as a social commentary, the story has some sad things to say about the human condition. The events chronicled in the film seem plausible and that’s a reason why, alongside the intensity of the experience and the performance of Pattinson, it’s effective. Good Time may not offer what the title hints at but the experience it provides is nevertheless worthwhile.