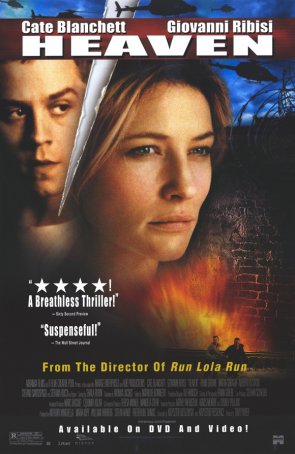 Heaven represents the fusion of stoic contemplation with kinetic mysticism – German filmmaker Tom Tykwer's adaptation of the final screenplay by the great Polish filmmaker Krzysztof Kieslowski (who wrote it with longtime partner, Krzysztof Piesiewicz). At the time of his death, Kieslowski (the auteur responsible for Decalogue and the Three Colors Trilogy) was developing a new three-film set: Heaven, Hell, and Purgatory. Only the screenplay for Heaven was near completion, and, through a circuitous route, it improbably made its way to the desk of the Run Lola Run director. In retrospect, Tykwer should have been guided by his first instinct and refused it. But the temptation was too great, and the result is a sadly mediocre project.

The story concerns a terrorist, Philippa (Cate Blanchett), who is arrested after setting off a bomb that kills four innocent people. Philippa, a British school teacher living in Italy, did not intend to kill those people – her target was a man involved in drug trafficking who escapes as the result of a series of lucky coincidences. Fillippo (Giovanni Ribisi), a member of the Carabinieri, is Philippa's translator and guard during the police investigation of her crimes, and he quickly comes to believe in her – to the point where he is willing to risk his career and his good name to help her escape. Meanwhile, Philippa is only interested in freedom so she can finish the work she started (killing the drug baron); her guilt-ridden conscience demands that she face punishment for the four people she inadvertently killed. 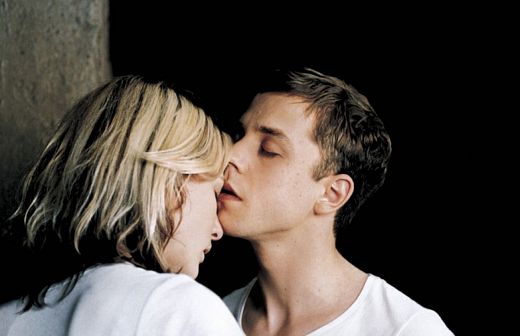 The moral ambiguities inherent in this story mark it as something from Kieslowski's pen; however, Tykwer's approach proves to be ill-advised. The mismatch is as out-of-tune as that of Stanley Kubrick and Steven Spielberg with A.I., and the result is predictably underwhelming. Many of Kieslowski's scripts probably wouldn't work for other directors, since he alone had a sense of how to interpret them in a way that would pay the highest dividends. Certainly, the dynamic Tykwer, a great filmmaker in his own right, seems out of his element.

Heaven's tone is all wrong. The movie tries to be ethereal, but ends up seeming goofy. The story is de-politicized (at least in comparison with Kieslowski's body of work), yet there's a sense that it is trying to make a statement. The final product is passionless and largely humorless, with the downshifted Tykwer seemingly emasculated by his need to respect Kieslowski's final words. One of the problems with the film has nothing to do with the director or the script – there are deficiencies in the other critical elements. With the exception of one extraordinarily powerful scene (in which Philippa discovers the nature of her crime), Cate Blanchett's performance is muted. Giovanni Ribisi is simply awful – he spends most of the movie looking like a deer caught in a car's headlights. The music and cinematography are adequate, but I wonder whether Heaven would have been a better film if Tykwer had worked with some of Kieslowski's frequent collaborators.

Ultimately, Heaven doesn't seem like a Kieslowski film or a Tykwer film. The bizarre amalgamation of vastly different approaches results in a strange product that occasionally explores some interesting ideas (such as where the dividing line is between a freedom fighter and a terrorist), but leaves the audience dissatisfied. The quasi-mystical ending isn't likely to win over many fans, either, since it seems grossly out of place with the rest of the movie, which is supposed to be grounded in reality. In something like The Princess and the Warrior, Tykwer could get away with this (due to the nature of the film), but trying it in Heaven pre-supposes that the audience connects with the material on a deeper level than is likely. Heaven seems destined for limbo.