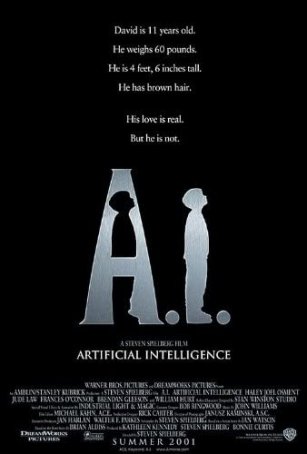 At the time of its 2001 release, expectations were high, perhaps unreasonably so, for A.I., the first – and only – movie to bear the monikers of cinematic heavyweights Stanley Kubrick and Steven Spielberg. Yet, while A.I. is consistently involving, and has moments of near-brilliance, it is far from a masterpiece. In fact, as the long-awaited "collaboration" of Kubrick and Spielberg, it ranks as something of a disappointment.

By now, the story behind A.I. is well-known. Kubrick had been nursemaiding this project along for almost two decades, awaiting the time when technology could produce visual effects at the level demanded by his perfectionism. Over the years, he spoke in some detail with Spielberg about A.I., and, after his death, Spielberg decided to shepherd the project to completion. To that end, he attempted to wed his own style to Kubrick's. The late master's name appears in the opening credits (the movie is presented as "An Amblin/Stanley Kubrick Production"), and Kubrick's brother-in-law and long-time executive producer, Jan Harlan, is listed as one of two Executive Producers.

I can't help but wonder if the inherent conflict in Kubrick and Spielberg's life views is the reason why A.I. seems so disjointed and uneven. Kubrick had a dim, cynical view of human nature. Spielberg, on the other hand, is an optimist. A.I. shows both sides, and not always to good effect. It is at times life-affirming and positive; at others, cold and grim. The film's final half-hour is a curiosity, and not a successful one – a prolonged, needless epilogue which force-feeds us a catharsis that feels as false as it is extraneous to an otherwise fine story. There is no doubt that the concluding 30 minutes are all Spielberg; the outstanding question is where Kubrick's vision left off and Spielberg's began. 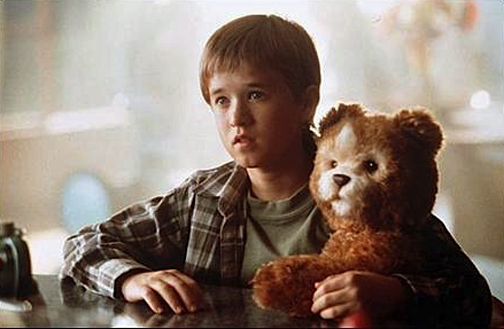 A.I. is a science fiction re-interpretation of "Pinocchio" (a story the film frequently references) crossed with "Frankenstein". Events take place in a futuristic setting, where the rise of the oceans has swallowed up seaside cities like New York and Amsterdam, where New Jersey resembles an Amazon rain forest, and where the sin-and-sex center of the planet is a place called Rouge City, which resides across the Delaware from New Jersey (perhaps this is what becomes of Philadelphia). This future, as imagined by Spielberg and his set designers, is every bit as awe-inspiring as what Ridley Scott brought to the screen in Blade Runner and what Luc Besson crafted for The Fifth Element. Rouge City is stunning, and the waterlogged ruins of Manhattan are hauntingly beautiful.

The story centers around David (Haley Joel Osment), a child substitute "mecha" who represents the first of his type – a synthetic who can actually love. In this case, the object of his incompletely-understood emotion is his "mother", Monica Swinton (Frances O'Connor). Monica's husband, Henry (Sam Robards), who brought David home as a pilot project from his workplace, Cybertronics of New Jersey, is more wary of the robot child. And, when one of David's actions endangers Monica and Henry's natural son, Martin (Jake Thomas), Monica is forced to take David into the woods and "lose" him. He is quickly found by a group of anti-robot fanatics, and, while being held captive by them, he befriends Gigolo Joe (Jude Law), who becomes an invaluable ally in his escape. 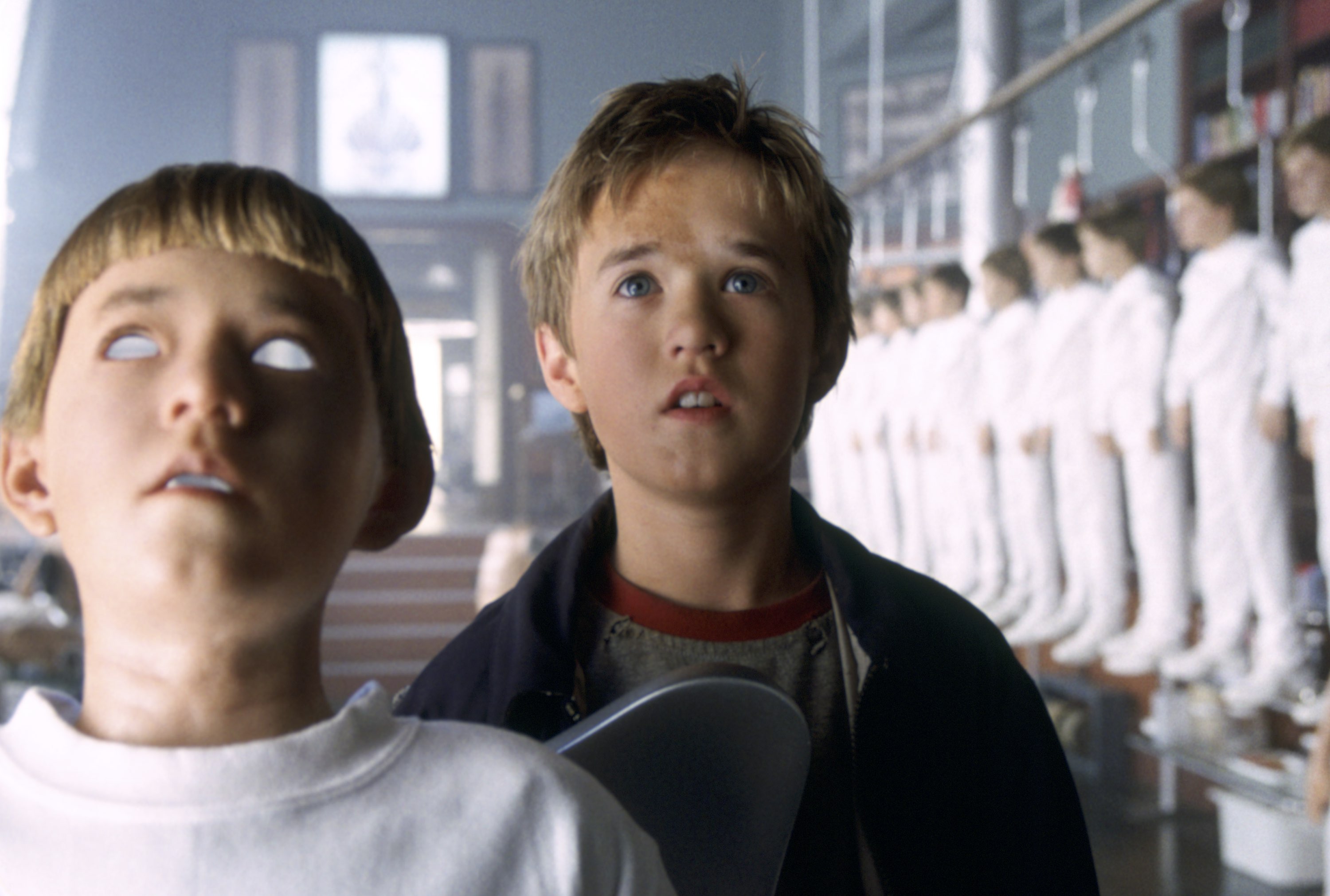 Like the real-life science surrounding the development of Artificial Intelligence, the movie is top-heavy with moral and ethical questions. What is life and where is the line that divides sentience from a programmed response? If a robot can genuinely love a person, what responsibility does that person bear in return? How can an immortal robot cope with outliving its organic creators? Writers from Mary Shelley to Isaac Asimov have been fascinated by these dilemmas. Perhaps Spielberg attempts too much with A.I. To some degree, by trying to tackle all of these issues, he fails to effectively present any of them. Plot threads are dropped at an alarming rate.

A.I. is an ambitious film that, when it misses its mark, does so because it strives for so much. The script does not insult the audience's intelligence, and it gets us thinking about "big issues", such as love, life, god, and our place in the universe. It's unfortunate that as much thought didn't go into structuring the narrative as went into crafting the movie's thematic content. And those who have come to equate science fiction with action will be disappointed. A.I. is a drama with little in the way of adrenaline-boosting sequences. Spielberg has consciously slowed things down, relying on viewers' curiosity about the ideas and identification with the characters to keep them involved in the proceedings. 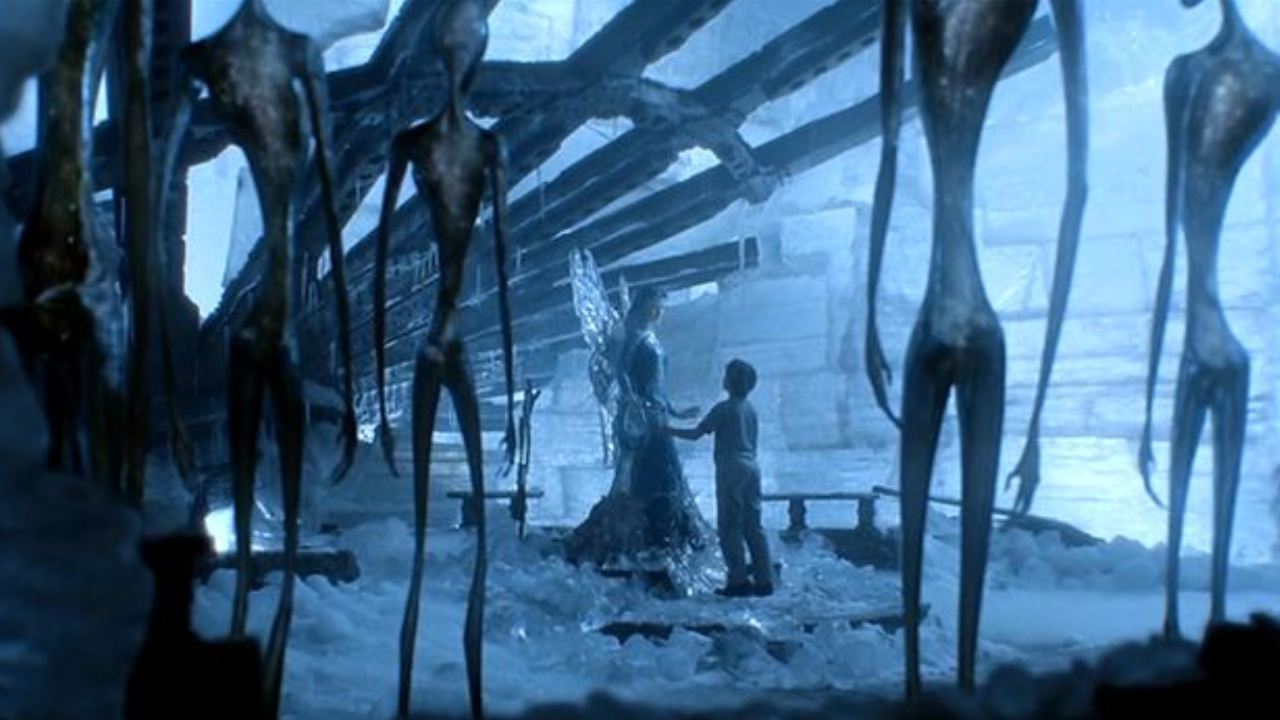 The acting, as is usually the case with a Spielberg film, is top-notch. Osment, who is still best known for seeing dead people in The Sixth Sense, is compelling as the Pinocchio-like David. He imbues the robotic character with genuine humanity but, by slightly exaggerating his mannerisms and some vocal inflections, constantly reminds us that David is not human. All of this is subtle; there are no herky-jerky movements and he does not speak in a monotone. Frances O'Connor is credible as the conflicted Monica. And, in the part of Gigolo Joe, an android made to give women pleasure, Jude Law is spry and sprightly. The always-dour William Hurt plays David's creator (he also serves as the mouthpiece for much of the film's exposition – he gives several long, wordy speeches). There are also numerous vocal cameos, including the likes of Robin Williams and Ben Kingsley.

So is A.I. a Kubrick movie or a Spielberg production? Since the film, which suffers from a case of split personality, can't seem to make up its mind, how are we supposed to? Perhaps the more relevant question is whether it's worth seeing. The answer is that, for all of its underdeveloped potential and truncated subplots, there's still enough of value in A.I. to make it a captivating experience.