Ever wonder what a mumblecore road trip might be like? Whether intentional or not, that’s what Izzy Gets the Fuck Across Town feels like. (The “u” in the subversively titled film has been censored in posters and other marketing material but not in opening credits.) Despite a committed performance from lead actress Mackenzie Davis and a promising opening, the film quickly corkscrews into a death spiral of trite dialogue meant to obfuscate the lack of a coherent or meaningful narrative.

“Mumblecore” indicates several things: endless, insignificant banter between characters, a lack of forward momentum, and a belief that speaking written dialogue verbatim is a bad thing. I don’t know whether there was much (if any) improvisation in Izzy but the quality of what the characters say gives that impression. They talk and talk and talk and say nothing. Despite increasingly desperate attempts by first-time feature director Christian Papierniak to juice things up (using odd camera angles, colored filters, and a headache-inducing punk soundtrack), all he succeeds in doing is calling attention to how little substance there is. 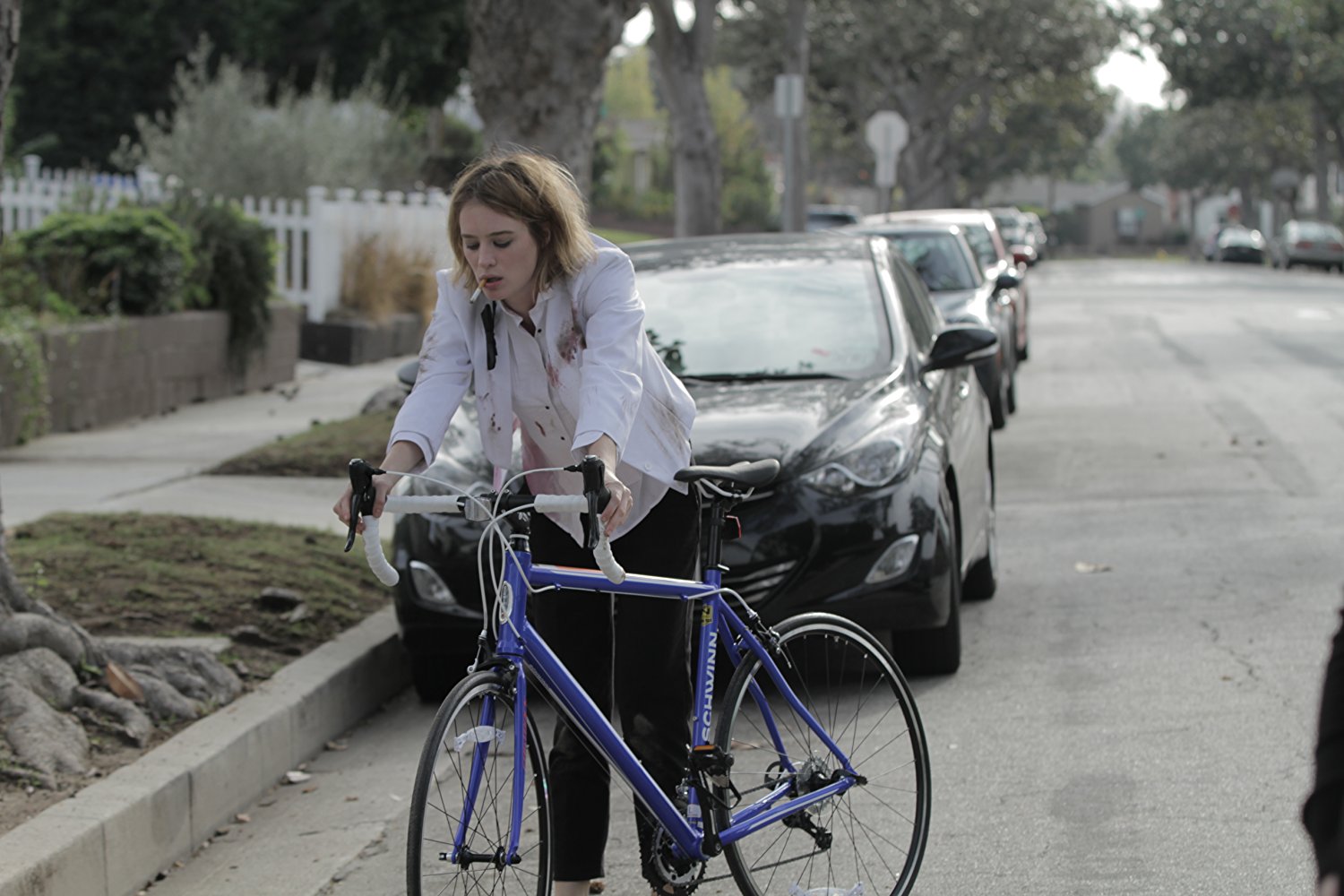 Izzy (Davis) is a down-on-her-luck musician. We meet her when she stumbles out of bed, hung over, and realizes she doesn’t know the guy who’s sharing the sheets with her. After getting herself together and having a short conversation with Mr. X, a seemingly nice guy named Dick (Brandon T. Jackson), she begins what will turn out to be a long and exhausting day. Upon returning home, she learns that the love of her life, ex-boyfriend Roger (Alex Russell), is about to become engaged to her ex-best friend Whitney (Sarah Goldberg). Determined to break up the happy couple, Izzy must make it across Los Angeles by 5:00. Traffic notwithstanding, it’s a monumental task for someone with no car (it’s in the shop), no money (her bank account is in the red), no friends (everyone she knows seems to hate her), no prospects, and an apparent aversion to taking the bus. The movie details her lackluster misadventures trying to get from point A to point B before the digital clock expires. Along the way she meets the likes of Keith Stanfield (the actor/rapper better known as Lakeith Stanfield), who may be the most inept car repairman in Los Angeles; Haley Joel Osment (grown up, bearded, and no longer seeing dead people); and Alia Shawkat (who comes with a ton of indie cred). And she sings a song with Carrie Coon, who plays her estranged sister, Virginia.

A word about the climax without getting too spoilerish… It’s not earned. Maybe the problem is too little coherent backstory but the sudden about-face of a character feels so unreal that I thought at first it was a dream sequence. Admittedly, Papierniak walks things back during the final few minutes – he has a point to make about Izzy’s inability to live in the present – but the damage has been done. Outside of Izzy, no one in this film has a purpose beyond adding “color” to the palette or fulfilling the role of a screenwriter’s contrivance.

Note that everyone in Izzy’s life is either an ex or estranged. There’s a reason for that. Izzy is toxic. She’s one of the most unpleasant characters to grace the screen in recent months. Self-absorbed and lacking even a smidgen of self-awareness, she’s the embodiment of everything people despise about Millennials. Spending 90 minutes with her is torture. Davis is phenomenal and it’s occasionally possible to get lost in the energy of her live-wire performance, but that’s one of the few compliments I feel comfortable lavishing on this tedious excursion into pointlessness.