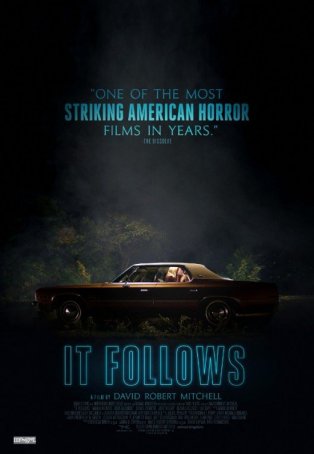 It Follows, as uncommon a horror film as you're likely to find in the wasteland of PG-13 mediocrity defining the genre today, takes its inspiration from a film that's 37 years old. By echoing John Carpenter's Halloween (not in terms of narrative but it nearly every other way that matters), director David Robert Mitchell has announced that he won't be bound by the limits of modern multiplex horror tropes. He doesn't feel obliged to throw out random "boo!" moments to keep viewers awake. He doesn't explain the unexplainable. And he isn't afraid of full frontal nudity (from members of both sexes). Old school? To be sure. And, even though the e-readers and modern cars signal that It Follows is set in 2014, there's a '70s/'80s vibe to everything, right down to the clunky picture tube TVs and princess landline phones.

It Follows doesn't try to get viewers to jump out of their seats. Instead, employing the time-honored technique of the "slow build", it pressures fingernails to dig into arm rests. Good horror films rely on suspense and tension, and this one has both elements aplenty. It also uses sound - a dissonant score by Rich Vreeland and odd, unsettling noises - to establish a mood. The theme isn't a match for Carpenter's iconic Halloween tune but it accomplishes something similar. It trips a switch deep in the subconscious and lets the uneasiness settle in.

The cast is populated by unknowns with names like Maika Monroe, Keir Gilchrist, and Lili Sepe. Some look vaguely familiar, probably because they have had small roles in other films and TV shows, but this gives several a chance in the spotlight. Monroe in particular makes the most of the opportunity. You can feel her despair; she sells the situation. The scene in which her character, Jay, awakens in a hospital room shows how good she can be - her terror and vulnerability are authentic.

If there's one thing we know about old school horror films, it's that sex always has bad consequences, and It Follows is no exception, although in this case the situation is more literal. There's a supernatural stalker out there and it's following people with less-than-benevolent intentions. It's relentless, invisible (except to its would-be victims), and able to change its appearance. There are rules. The Stalker pursues only one person at a time and that person can change the target by having sex with someone - then the sex-partner becomes the potential victim. Think sexually transmitted disease crossed with a chain letter. If The Stalker kills the target, it starts moving in reverse up the chain. Its physical manifestation can be stopped by walls and doors and other obstacles but it is tenacious and possesses an unerring sense of direction where its target is concerned. It moves slowly and inexorably. Remember the scene in Halloween where Michael crosses the street in pursuit of Laurie Strode as she pounds on the door of the house where she's babysitting? Mitchell obviously did. Much of his film unfolds with that sense of mounting dread.

Thankfully, It Follows doesn't dwell too much on the morality of having sex with someone to transfer a death sentence. That's fine because it's not that kind of a movie. It's not deep or philosophical; it's visceral. We find ourselves in Jay's shoes, wondering whether every approaching individual is a harmless passerby or a demon from hell. For a while, she thinks she can handle it - until she realizes how dire her situation is. Even having sex doesn't guarantee anything - not only does it put another person at risk but, if he dies, she's back in danger again. Her best male pal, Paul (Keir Gilchrist), is more than willing to help out but she cares too much for him. Instead, she looks to someone more self-assured.

The unknown is always terrifying. That's why Michael Myers, initially credited as "The Shape", is more frightening in Halloween than in the sequels. The more we learn about him, the more neutered he becomes. It Follows gives us a villain with a blank slate and doesn't seek to do more than sketch in a few basic details. The Stalker looks different each time it appears - a feral child, a forlorn naked woman, an (equally naked) old man, a giant… the possibilities are endless. Of its nature, nothing is said. There's no seemingly obligatory scene in which the characters gather in a library and discover an old book that tells the background of Jay's tormentor.

Mitchell doesn’t believe the current canard that horror movies must be PG-13 to be worthy. The violence/gore in the movie isn't extreme. There's not much blood and the body count is shockingly low. But there's a lot of frontal nudity. Had Mitchell added a few clothes, he could have gotten the PG-13, but there's something unnerving about seeing someone in a seemingly vulnerable state (naked) set on such a relentless course of action. Add clothing and an element of menace would be lost.

The ghost of Halloween hovers so low over It Follows that there are times when one can almost hear John Carpenter whispering through the strange noises that populate the soundtrack. Some of Mitchell's shots evoke the 1978 classic, like a scene in which two girls meander along a suburban sidewalk. But it's the tone that marks the biggest similarity - Mitchell plays the long game with his movie, holding the audience hostage for more than 90 minutes, getting us to squirm as he ratchets up the tension.

Horror movies that get under your skin the way It Follows does are rare events - they're usually unsung, low-budget endeavors. They achieve notoriety by word-of-mouth. Except for a few moments of head-scratching illogic, this one is pretty close to perfect for what it's trying to do, right down to the deliciously ambiguous ending. Let's hope no one gets the bright idea of making a sequel - It Follows needs nothing to trail in its wake.