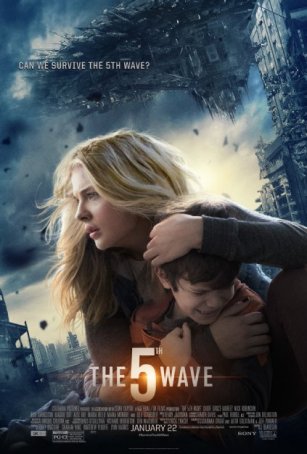 The 5th Wave is an adaptation of Rick Yancey’s 2013 YA sci-fi novel. Although many recent multi-book YA properties have made successful book-to-screen translations (The Hunger Games, Divergent, The Maze Runner), The 5th Wave is a departure from this trend. The storyline is generic apocalyptic science fiction and feels a lot like an uninspired fusion of Independence Day and the TV mini-series “V”. Trying to cram too much material into about 100 minutes, the filmmakers lose control of the narrative as snowballing contrivances become difficult to ignore. And, because this is the first chapter of a planned trilogy, we’re left with a tepid ending that teases future installments that may never be made.

By all accounts, the book holds together better and it’s not hard to see how that could be the case. Many of the problems with The 5th Wave feel like the result of an adaptation that would rather condense than prune. Details are left out that might make the plot gel and wouldn’t demand a high degree of suspension of disbelief. For stretches, The 5th Wave is sporadically entertaining but it’s frustrating as well because of the logical holes and incomplete ending. It’s hard to envision The 5th Wave, with its unfavorable release date and limited marketing, generating enough of a box office return to prod Sony into greenlighting a sequel, and this movie does not stand well on its own. 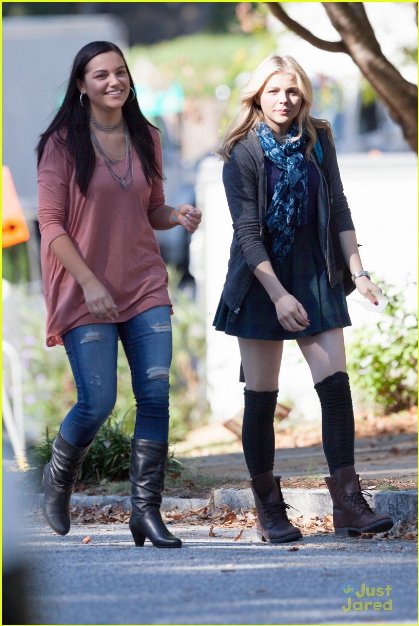 The 5th Wave spends about a half-hour at the outset providing background about an alien invasion. This, as it turns out, is by far the most interesting and successful part of the movie. The extraterrestrial incursion occurs in waves. In Wave 1, a giant alien ship enters orbit and, after hanging around for a while, hits the planet with an EMP. In Wave 2, the ship triggers worldwide tsunamis that destroy coastal cities. Wave 3 is a plague that wipes out most of the remaining population. In Wave 4, the aliens land snipers to pick off survivors. This all leads to Wave 5 which, at least as presented in the film, is an unnecessarily convoluted campaign for a species possessing the technology to accomplish what this one has achieved in the previous waves. Maybe the book explains it better…

The film follows the travails of two main characters: indomitable high school student Cassie (Chloe Grace Moretz) and her would-be boyfriend, football player Ben Parish a.k.a. “Zombie” (Nick Robinson). Cassie loses her mother (Maggie Siff) during Wave 3 and her father (Ron Livingston) during Wave 4. Her 5-year old brother, Sam (Zackary Arthur), is taken to a military safe haven under the command of Colonel Vosch (Liev Schreiber) and Sergeant Reznik (Maria Bello). There, Sam meets Zombie and becomes part of his squad. Meanwhile, Cassie is injured while searching for her brother. She is nursed back to health by a stranger, Evan Walker (Alex Roe), with whom she begins a relationship. Evan agrees to accompany her to the military base to find Sam but, as she learns along the way, all is not as it seems with this Good Samaritan.

Although The 5th Wave provides resolution to some plot elements, it leaves numerous threads dangling. The alien “Others” have a plan and purpose but, aside from a need for Earth, the reason for the invasion isn’t revealed.  Additionally, it’s unclear whether the Others look like humans or whether, Body Snatchers-style, they are inhabiting human hosts (or mimicking human bodies). The psychology, physiology, and motivations of the aliens don’t seem well thought-out, but that could be something that the screenwriters were unable or unwilling to translate from the source material.

Like all YA novels, this one involves a love triangle. Or, considering hints that a tough goth girl named Ringer (Maika Monroe) is doing her best to hide an attraction for Zombie, maybe that should be a “love quadrangle.”  In part because they’re not given sufficient time to organically develop and in part because the dialogue is pretty bad, the romantic entanglements feel forced. One character’s monologue about love is so lame that it’s hard to keep from laughing aloud at its absurdity.

When The 5th Wave was optioned, it was almost certainly viewed as a property with Hunger Games potential. Most comparisons between the two franchises, however, tilt against The 5th Wave. The situation isn’t as compelling. The romances lack intensity. And, although lead actress Chloe Grace Moretz has been effective in other action-oriented roles (as Hit-Girl in Kick Ass and its sequel, for example), she seems miscast here. With a movie version of (sequel) The Infinite Sea in doubt, there seems to be little reason to see The 5th Wave unless you’re a fan of unfinished stories that likely will never be completed.