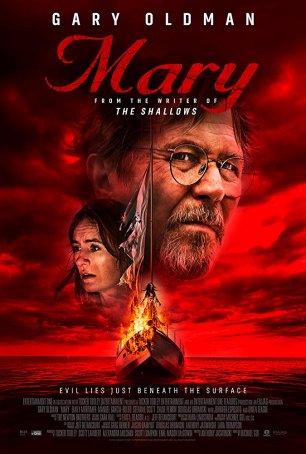 When watching something like Mary, it’s useful to remember that actors, like all of us, have mouths to feed and bills to pay. That’s why an Oscar winner like Gary Oldman and a respected actress like Emily Mortimer can find themselves adrift in a meandering screenplay like Mary, where horror flotsam drifts by and terror drowns in the depths. Mary is a haunted house movie set on a big sailboat. It’s not a bad premise but writer Anthony Jaswinski wrings little in the way of interest from a by-the-numbers screenplay and veteran TV director Michael Goi conveniently forgets how important atmosphere is to making something like this work. When it comes to waterborne movies, Wolfgang Petersen’s The Perfect Storm (not a horror film) is more terrifying than Mary.

Oldman shows how good an actor he his by not appearing bored and not going over-the-top. He takes his character, David, seriously. Mortimer, on the other hand, is more obviously in the “take the paycheck and run” mode although, to be fair, her character is dreadfully delineated and woefully developed by the screenplay. The only thing more questionable than her decisions are her motivations. The other actors are as unmemorable as the stereotypes they play.

Mary’s non-chronological approach (presenting the main story in flashback) undercuts tension, informing us at the outset that David is dead. The movie opens with a battered and bruised woman (Mortimer) being brought into a police station for questioning. We are told that her children are okay but she is a suspect in the destruction and sinking of a sailboat. She doesn’t deny the charge and tells the investigator (Jennifer Esposito) the story behind her actions. Her narrative begins with David’s purchase of a used boat, the “Mary,” and ends with its disastrous, haunted maiden voyage when the spirit inhabiting the vessel appears on board and causes insanity and death. No coherent explanation is given for not abandoning the journey, even though the ship puts into port to offload one of the hands who has lost his marbles.

Once in a while, it’s possible to catch glimpses of what Mary could have been with a stronger screenplay and a more innovative director at the helm. For the most part, the movie underplays the claustrophobia of being trapped in a confined space with a supernatural killer. It fails to play up the isolation of being marooned in the middle of so much water with no immediate hope of rescue. One of the best terror-at-sea movies I can remember is 1989’s Dead Calm and, although the “monster” in that film was a flesh-and-blood Billy Zane, director Phillip Noyce made excellent use of the setting to heighten the tension. In this case, Goi uses it as a passive backdrop.

The “twist” at the end is both expected and uninspired. It doesn’t make sense but it’s the kind of thing second-rate horror movies do and I guess it justifies the decision to avoid a straightforward chronological representation of the story. Oldman’s presence elevates the movie higher than it deserves. Without him, it would be a bottom-of-the-barrel affair – a stale ghost story with little to recommend it. With him, there’s at least the dubious pleasure of seeing a sterling actor slumming. Mary is more mediocre than bad but there’s nothing here to catch the attention of anyone serious about their horror.