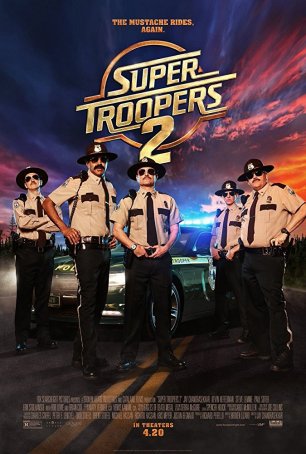 17 years in the making…was it worth the wait? I suppose that depends what the wait was for. Super Troopers 2, the crowdfunded sequel to 2001’s Super Troopers, appears to have been designed predominantly for those who contributed to its budget. The movie is a pea in the same pod as its predecessor, highlighting a similar stoner humor of the variety that catapulted Super Troopers to cult status. The comedy mixes slapstick, lowbrow antics, wordplay, and (thankfully) little in the way of gross-out material. Most of the gags and jokes would have fit nicely into the culture of the early 2000s. In the interval between the release of Super Troopers and its sequel, we have moved on. For better or worse, Broken Lizard hasn’t. As a result, some of what would have been side-splitting in 2001 barely provokes a chuckle in 2018. And some of the non-PC humor that would have been seen as transgressive or edgy a half-generation ago now seems dated and even a little out-of-touch. There are still some decent laughs but not as many as one might expect or hope for. 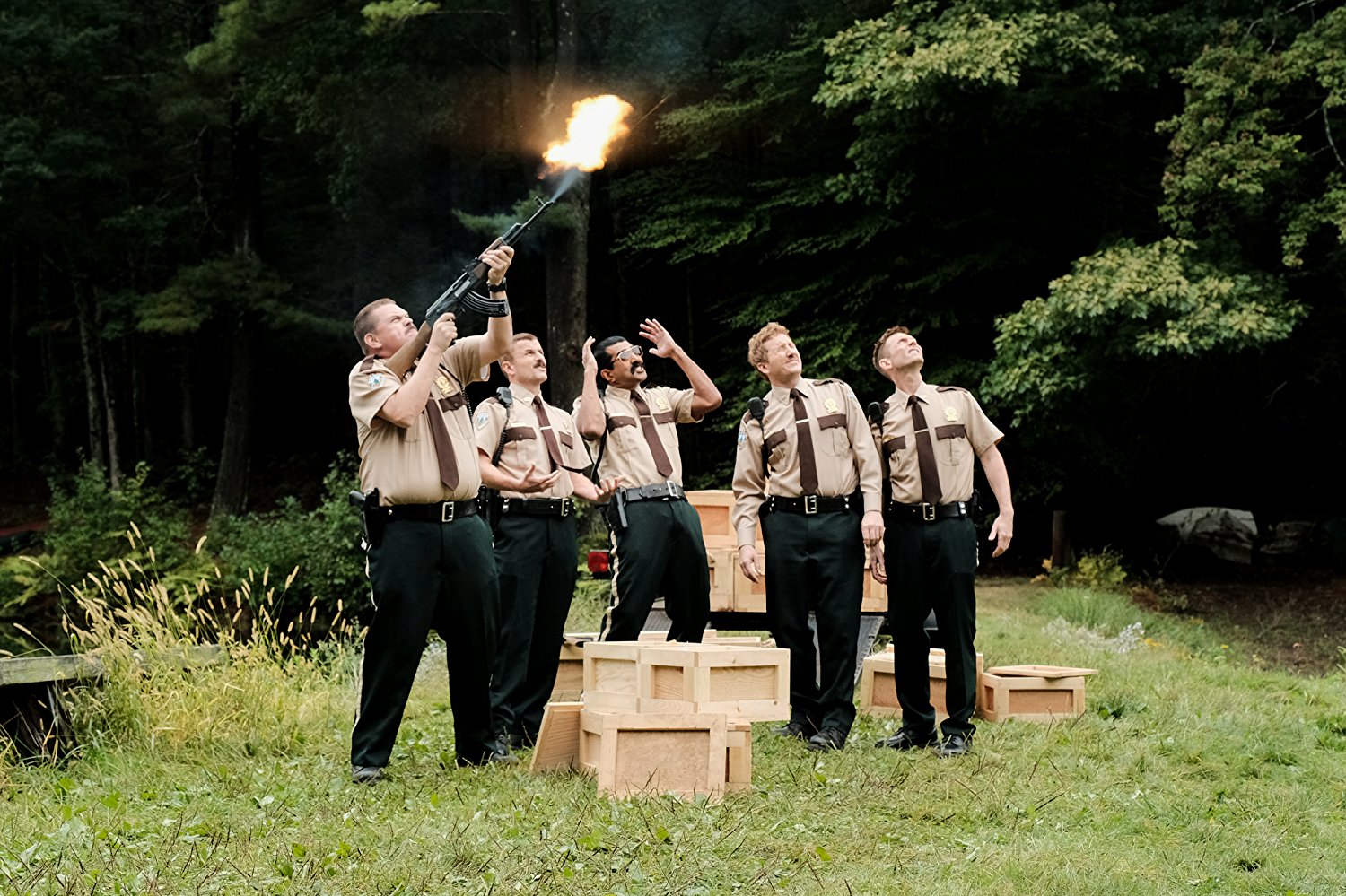 Broken Lizard takes their cue from the Monty Python movies in terms of structure. Jay Chandrasekhar directs in much the same way that Terry Jones helmed the last two Python films – a leader among equals. There’s an umbrella story used primarily as glue to tie together a series of vignettes, many of which could have stood on their own. In addition to the comedy troupe, the film brings back Brian Cox as Captain O’Hagan to go along with “newcomers” Lynda Carter (playing the governor of Vermont), Rob Lowe (chewing on the scenery and mangling his French-Canadian accent) as the mayor of a border town, and Emmanuelle Chriqui. There are cameo appearances by Seann William Scott, Damon Wayans, and a game Fred Savage (who is referenced throughout but doesn’t appear until partway through the end credits – stick around to watch his scene).

There’s not much of a story, although the premise promises more than the movie delivers. Due to a snafu regarding the historical border between Canada and the United States, the northern nation cedes a small portion of territory to its southern neighbor, causing Vermont to gain a new county. The intrepid Super Troopers – Mac (Steve Lemme), Rabbit (Erik Stolhanske), Thorny (Jay Chandrasekhar), Foster (Paul Soter), and the boorish Farva (Kevin Heffernan) – are brought back from forced retirement (where they landed following the “Fred Savage incident”) to patrol the new section of Vermont. Their new beat puts them in direct conflict with three Mounties who are none-to-fond of having to pledge allegiance to the flag of the United States of America (they are played by American Hayes MacArthur and Canadians Tyler Labine and Will Sasso). The two warring sides come together, however, when they identify a drug smuggling operation being conducted in their territory. 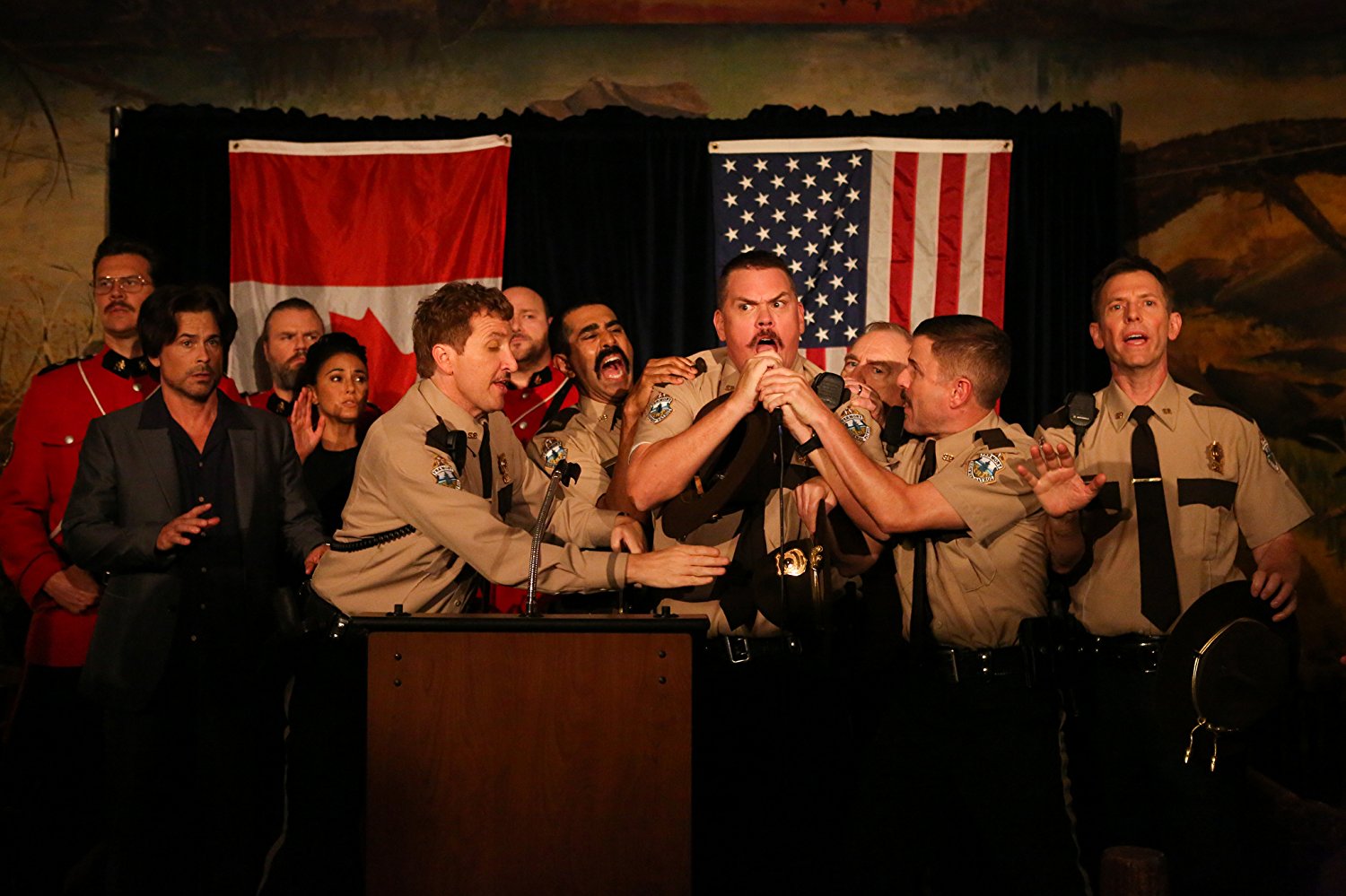 Super Troopers 2 spends a seemingly inordinate amount of time lampooning the cultures, customs, and stereotypes of both Canada and the United States. (There’s an ongoing joke about the pronunciation of “sorry.”) A little of that goes a long way and, after a while, it starts to grow tiresome. To a certain extent, that’s one of the main problems with Super Troopers 2: its length. As an extended short of maybe 30 to 45 minutes, it could have been an enjoyably ribald experience. At more than 90 minutes in length, it overstays its welcome.

Perhaps the release date – 4/20 – is the best clue about how to appreciate all that Super Troopers 2 has to offer. I can’t attest to how well the movie plays to a stoned audience but I’m willing to bet it would be warmly embraced. Without chemical enhancement, however, this is a forgettable, throw-away comedy with just enough laughs to keep it from being a complete waste of time. In the end, this is a sequel made for (and funded by) Super Troopers die-hards. It’s hard to imagine the uninitiated getting much out of it.