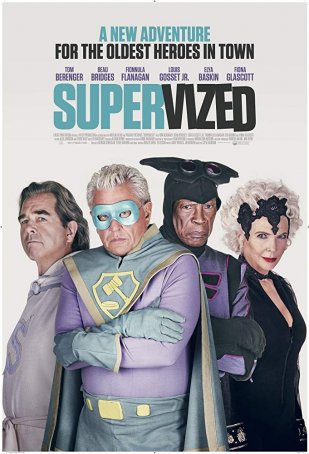 Let me admit to loving the premise behind Supervized. The problem is that a movie needs more than a great premise – it needs to grow and nurture that idea, and that’s where Supervized falls short. To an extent and for a while, the film gets by primarily on the strength of its tepid and uneven humor. However, when it’s forced to draw on comic book tropes, it loses steam. There’s not a scintilla of originality in the superhero aspects of the movie and the humdrum and predicable resolution feels unworthy of the aforementioned premise.

Supervized is sort of The Expendables for the MCU or the DCEU. It postulates an endgame for superheroes who grow too old to keep leaping tall buildings (or knocking them down) and defeating the baddest of bad guys. What Logan did in an intelligent, serious manner, Supervized does with its tongue planted in its cheek. Dunmanor, located in Ireland, is the superhero retirement home. Under the care of the attractive, no-nonsense functionary-in-charge, Alicia (Fiona Glascott), the facility seeks to transition the world’s saviors into their post-crime fighting life. Living there are Ray (Tom Berenger), who once went by the name of “Maximum Justice”; his former sidekick, Ted (Beau Bridges); Pendle (a.k.a. “Total Thunder”) (Louis Gossett Jr.); and ex-love interest Madera Moonlight (Fionnula Flanagan).

Supervized might have been on solid ground if it had been content to remain low-key and take a semi-serious/semi-comedic look at nursing home life for past-their-prime icons. There’s a lot of untapped material in that vein – we get a flavor of it when the residents don their old costumes for an appearance and are upstaged by the current Hero of the Moment, Celestro (Hiran Abeysekera) – but Supervized feels the need to throw in a lot of mediocre action sequences and a cheesy villainous storyline. Satirical as this material may be, it also seems suspiciously like filler. It tries the patience more effectively than tickling the funny bone.

Director Steve Barron, the music video maestro whom some may remember as the man responsible for subjecting the public to the first live-action Teenage Mutant Ninja Turtles feature, aims in Supersized to poke fun at the current wave of superhero popularity by plucking low-hanging fruit. The cast is solid, with Tom Berenger and Louis Gossett Jr. in particular doing good jobs of portraying men who don’t understand where their glory days have gone (cue the Bruce Springsteen song), but a lot of the sophomoric humor feels too easy and obvious. There are no real characters here, just quickly sketched stick figures in too-tight costumes that deliver a few solid laughs but not much more. The sense of a missed opportunity is palpable, a chance to one-up Bubba Ho-Tep that never quite comes off. The movie might have worked better if the action/comedy field wasn’t so oversaturated at the moment (especially when it comes to comic book-inspired entries). To stand out amidst so much mediocrity, a production needs something to elevate it, and Supervized doesn’t have any such quality.