Vivarium could have been written by Steven King, but it wasn’t. It could be an episode of The Twilight Zone, but it’s not. The movie, whose story/screenplay is co-credited to director Lorcan Finnegan and Garret Shanley, is a study in the psychological horror of social isolation and the perils of domestic routine. In Strictly Ballroom, writer/director Baz Luhrmann adopted the slogan “A life lived in fear is a life half lived.” That applies here but in a darker, less optimistic way than Luhrmann intended.

Vivarium occurs in a warped reality molded by Escher and modeled at least in part by Village of the Damned. Some viewers may see shades of The Truman Show or Synecdoche, New York. The setting isn’t real nor is it intended to be. As in The Twilight Zone, no attempts are made to explain the unexplainable. The movie demands a willing suspension of disbelief and, for those who can accommodate, it opens a portal into a hellish, allegorical nightmare about the placid myth of suburbia gone wrong.

Gemma (Imogen Poots) and Tom (Jesse Eisenberg) are a young couple looking to buy a house so they can move in together and raise a family. Their search brings them to creepy real estate agent Martin (Jonathan Aris), who represents the cookie-cutter domiciles in the newly erected (but as-yet uninhabited) development of Yonder. Gemma and Tom agree to take a look, so they follow Martin to Yonder and its hundreds upon hundreds of identical (green) houses with small, perfectly manicured lawns. After taking a look inside #9, the couple decides it’s not for them. But when they look for Martin to tell him they’re not interested, he has disappeared. So they get in their car to head home but soon discover that they’re lost. Every street looks the same. What’s more, normal rules of direction don’t seem to apply. No matter how many turns they take and how many streets they explore, the route always brings them back to #9. They have become trapped in Yonder and, when their car runs out of gas (right in front of #9), they have no choice but to spend the night. 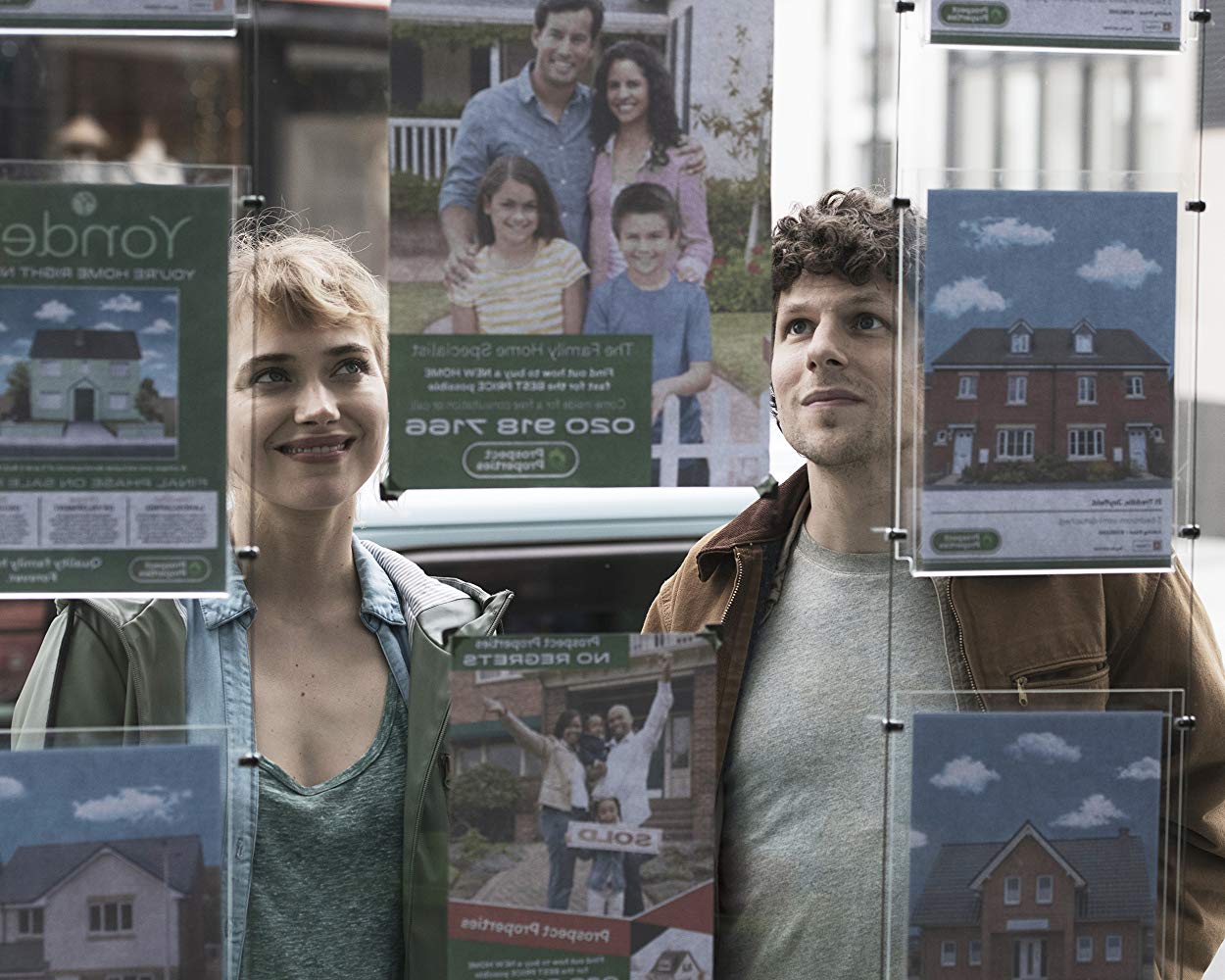 One night turns into two and two becomes three. Yonder won’t let them go. Mysteriously, a box of supplies appears near the curb. There are no other people. No animals. Then, one day, there’s another box. This one contains a baby boy with this promise: “Raise the child and be released.” Fortunately, the new member of the family grows quickly (far faster than a human) but his presence fractures the relationship between Gemma and Tom. While she concentrates on being a good mother, he digs a hole in the front yard, convinced that if he goes deep enough, he’ll uncover Yonder’s truth.

Vivarium unfolds like a mystery with a dark undercurrent to everything. The seemingly placid development takes on an ominous aspect as its secrets are revealed. Although the film boasts a strong opening and forceful ending, there are times in the middle when it drags. Overall, Vivarium might have been more effective if the filmmakers had tightened the reins and trimmed some of the fat (or spent more time during the early scenes amping up the sense of claustrophobia of being trapped like mice in a maze). 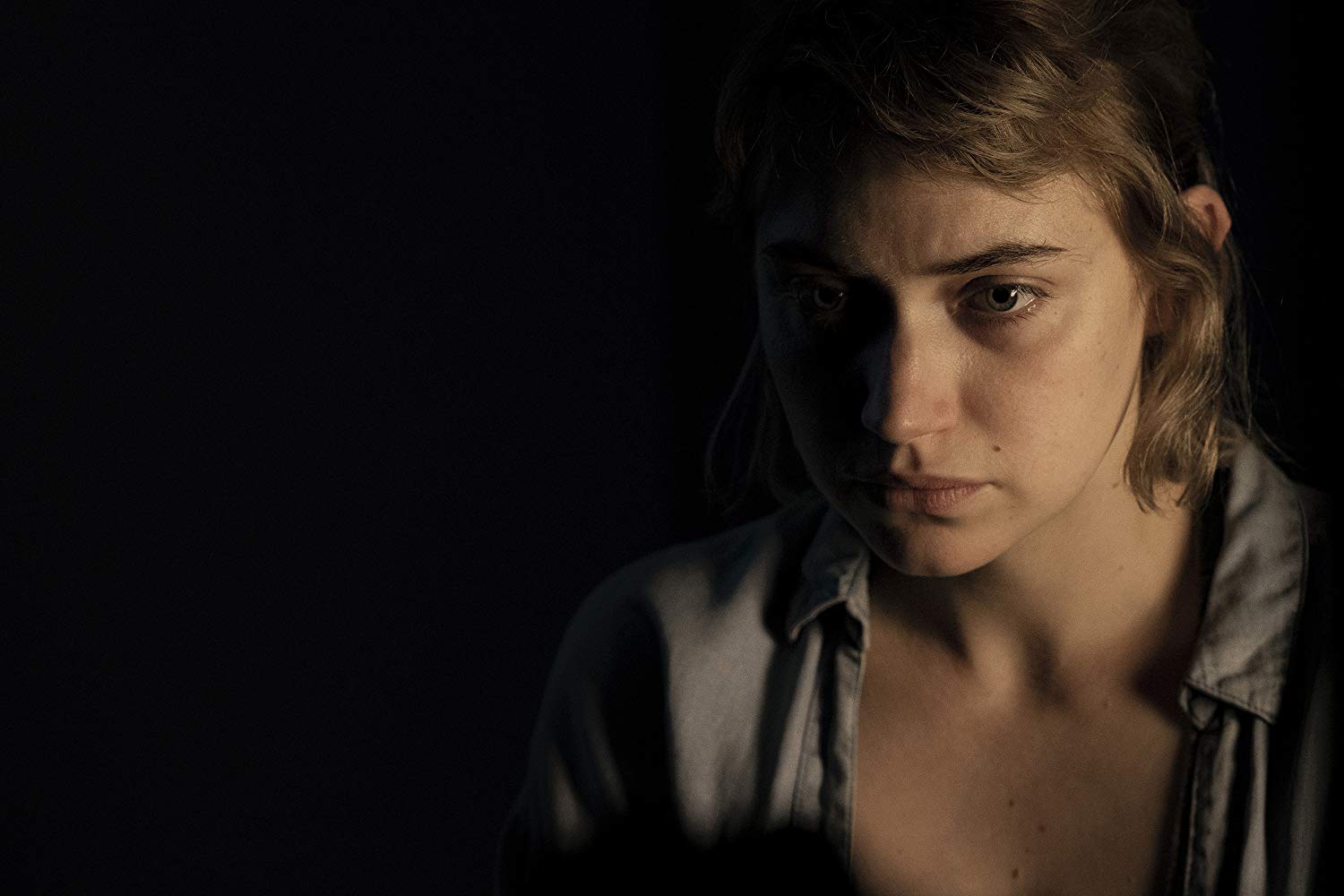 It’s difficult to deny the timeliness of Vivarium’s theatrical release – directly into the thick of the 2020 coronavirus outbreak when the concepts explored by the film, such as the impact of isolation on the human psyche, are playing out in the real world. The movie’s conclusions are dire; the narrative is structured like a vortex, always spiraling downward. There’s an explicit commentary on the numbing implications of suburbanization. The movie views cookie-cutter developments not as the height of communal, civilized living but as a trap where individuals, living out neutered lives, must struggle to find something “meaningful,” even if it’s as pointless as digging a hole. It gives them something to kill time until the promised moment of release arrives.

The acting, the lion’s share of which is provided by reliable actors Imogen Poots and Jesse Eisenberg, is solid, although Jonathan Aris steals his few scenes with his nape hair-raisingly creepy interpretation of Martin. Vivarium is more about atmosphere, however, gradually building the sense of dread until the viewer is certain nothing good is going to happen within the confines of Yonder. The set design – all those houses in a row – plays with expectations of “perfect” middle-class life. The screenplay wisely avoids overexplaining the situation, giving us glimpses of possibilities in Gemma’s wild ride, but allows us to draw our own conclusions about what’s happening. This is a dark and challenging film and those searching for escapist fare during these current times might find that Vivarium is a little too intense for comfort.