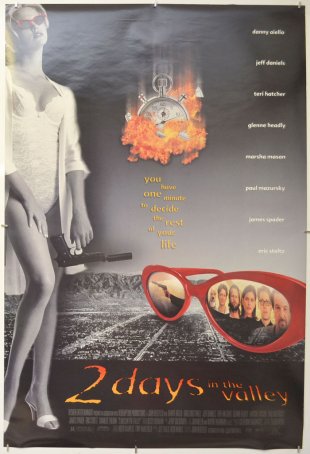 If this is what it's really like to spend a couple days in the San Fernando Valley during the hottest time of the year, then, like W.C. Fields, I'd rather be in Philadelphia. Actually, for a movie that's so precise about time (one of the characters is constantly using a stopwatch), the title's a little inaccurate. Unless I'm completely confused about when things started and stopped, it's not so much 2 Days in the Valley as it is about twenty-four hours.

What we have here is actually four individual stories that occasionally intersect, often in the most odd and unpredictable of ways. One of the best aspects of 2 Days in the Valley is the clever manner in which the narrative has been assembled. While things aren't nearly as elaborately-connected as in Pulp Fiction, I like the way paths cross, characters just miss each other, and everything comes together during the climactic ten minutes. While the plot of 2 Days in the Valley isn't a masterpiece of intrigue or intricacy, it kept me involved and entertained, and that's about the best you can hope for from this sort of motion picture.

The film opens with two hitmen, Desmo (Danny Aiello), an old-timer who's washed up, and Lee (James Spader), a cool-as-a-cucumber sociopath, staking out the house where a notorious womanizer, Roy Foxx (Peter Horton), is making the moves on his ex-wife, Becky (Teri Hatcher). Desmo and Lee have a contract to kill Roy, but who's paying the bill? And, unbeknownst to Desmo, Lee is preparing a little surprise for him once the night's work is done. In the end, Desmo ends up alive and on his own, and is forced to take hostages. 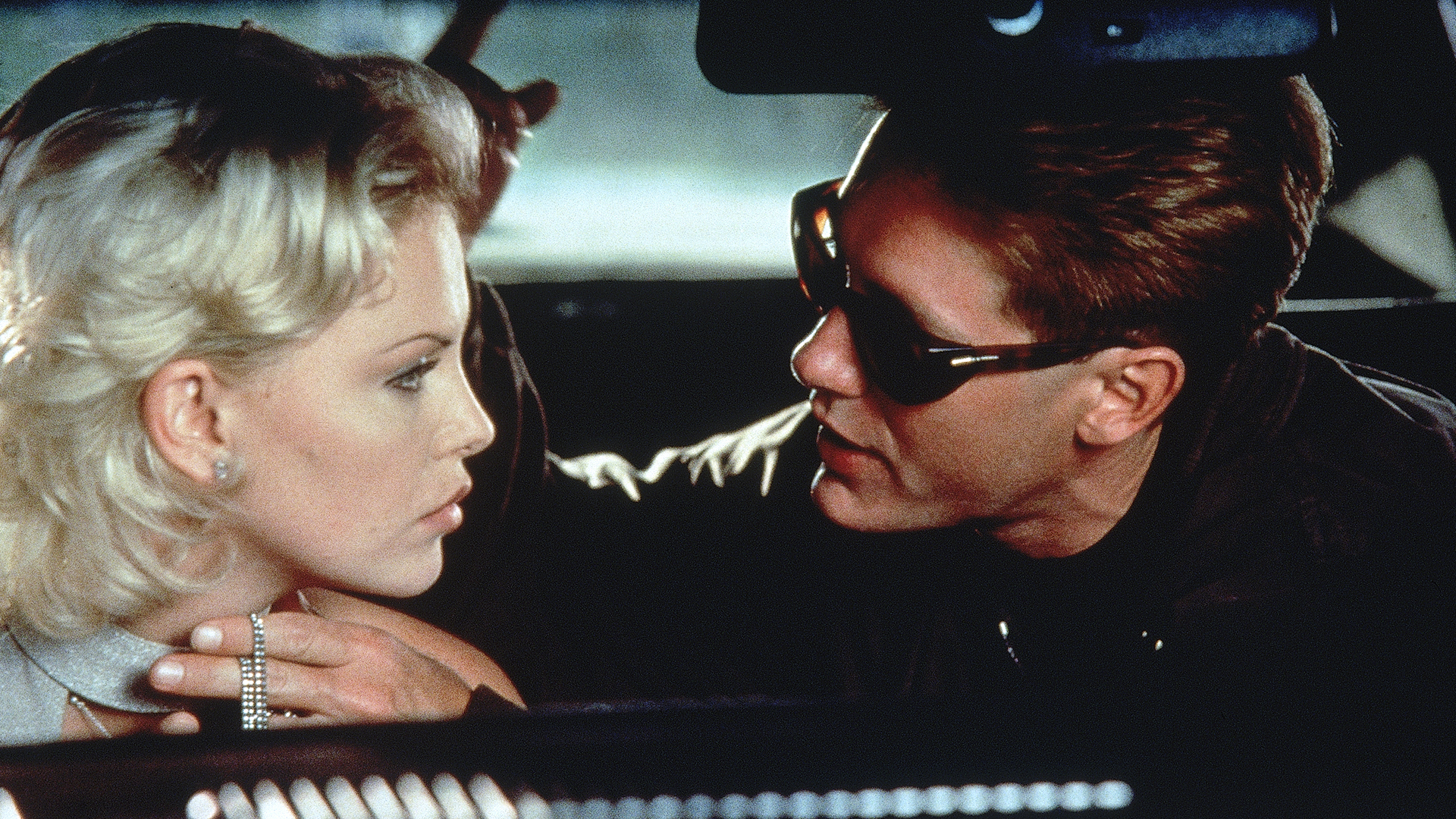 Meanwhile, a wealthy art dealer, Allan Hopper (Greg Cruttwell), suffering from an acute case of kidney stones, has to be rushed to the hospital. His personal assistant, Susan (Gleanne Headly), brings him home afterwards. To reward her for her loyalty over eight years of service, he offers to pay for breast implants and liposuction, claiming that if she took care of herself, she might get a man.

Two vice cops, Alvin (Jeff Daniels) and Wes (Eric Stoltz) are staking out a Japanese massage parlor, intending to bust the employees for illegal sexual activities. However, when Wes goes inside to get a first-hand experience, he feels sorry for the girl who services him, and walks out without making an arrest. Alvin, who's going through a series of tough personal problems, is furious at his partner, who shows more interest in playing homicide detective than doing his job.

Finally, there's Teddy Peppers (Paul Mazursky), the Emmy-Award winning director of Arthur's Last Hope. But that was four years ago, and, since then, he's had nothing but bombs. His life is a wasteland and his finances are in disarray. So, after finding a woman (Marsha Mason) who's willing to take responsibility for locating a new home for his beloved dog, he decides to end it all with a gun. Fate intercedes, however – but not just in Teddy's life. In one way or another, the wheels of destiny bring nearly all of these characters together, although not always at the same time and in the same place.

2 Days in the Valley has a penchant for the outrageous, with generous helpings of dark and ironic humor. There are a number of laugh-aloud lines, but the film works best when the comedy is of the "wink-wink-nudge-nudge" variety. For example, there's a scene where Alvin and Lee, cop and killer, are parked side-by-side at a traffic light. Then there's an incident where a bystander saves Allan by hotwiring a car to transport him to the hospital. Or, in one of my favorite scenes, Dosmo, ever the cordial hostage-taker, offers to cook pasta for his captives.

Teri Hatcher fans will be pleased. The actress has a fair-sized chunk of screen time, and, although she keeps all her clothes on, she gets involved in a nice little cat fight with future A-lister, Charlize Theron (who does not keep all her clothes on throughout). Most everyone in the cast does a good job, but the standouts are Aiello, who is hilarious as the toupeed, down-on-his- luck, dog-fearing hitman, and Spader, playing against type, as his emotionless partner. Keith Carradine, Louise Fletcher, Austin Pendleton, and Lawrence Tierney all have cameos.

I enjoyed 2 Days in the Valley. It's pure entertainment – nothing too serious, nothing too deep – with an artistic sensibility. It's rare for movies these days to recognize that the audience might have an intelligence, and even more unusual for them not to talk down to those in the not-so-cheap seats. So, if you're looking for some smart fun, John Herzfeld's feature is a worthy choice. And you don't need two days – just two hours.