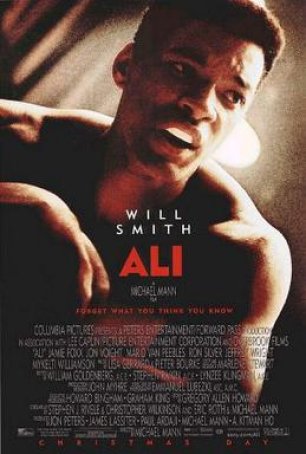 Ali, Michael Mann's attempt to chronicle ten pivotal years in the life of former heavyweight boxing champion Muhammed Ali, suffers from the most common ailment of motion picture biographies – trying to do too much in a limited time. While Ali's life from 1964 until 1974 might make appealing subject matter for an 8-hour mini-series, there's too much to cram into 155 minutes of cinema. As a result, we get the bare facts, but no real depth. Characters are left underdeveloped, relationships unfinished, and subplots dangling. Nevertheless, even considering those flaws, Ali still manages to entertain, even though it stays on the surface. It fails to deliver the hoped-for knockout, but also avoids the pitfall of an early-round collapse. While not attaining the greatness of its subject, it rises to a level somewhere above mediocrity.

Part of the reason for that is actor Will Smith, and another part is Michael Mann's ability to direct the boxing sequences (of which there are about a half-dozen) with flair. Every time the movie threatens to bog down, Mann takes us into the ring and re-invigorates the film. Not every one of Ali's matches during this period is covered (the Frasier/Ali re-match, which was not a title bout, is conspicuously absent), but the key ones are all there, meticulously re-created. And, while watching the documentary When We Were Kings is a far more satisfying recounting of the "Rumble in the Jungle" (the 1974 Foreman/Ali match in Zaire), Ali's presentation of it gives a flavor of the experience. 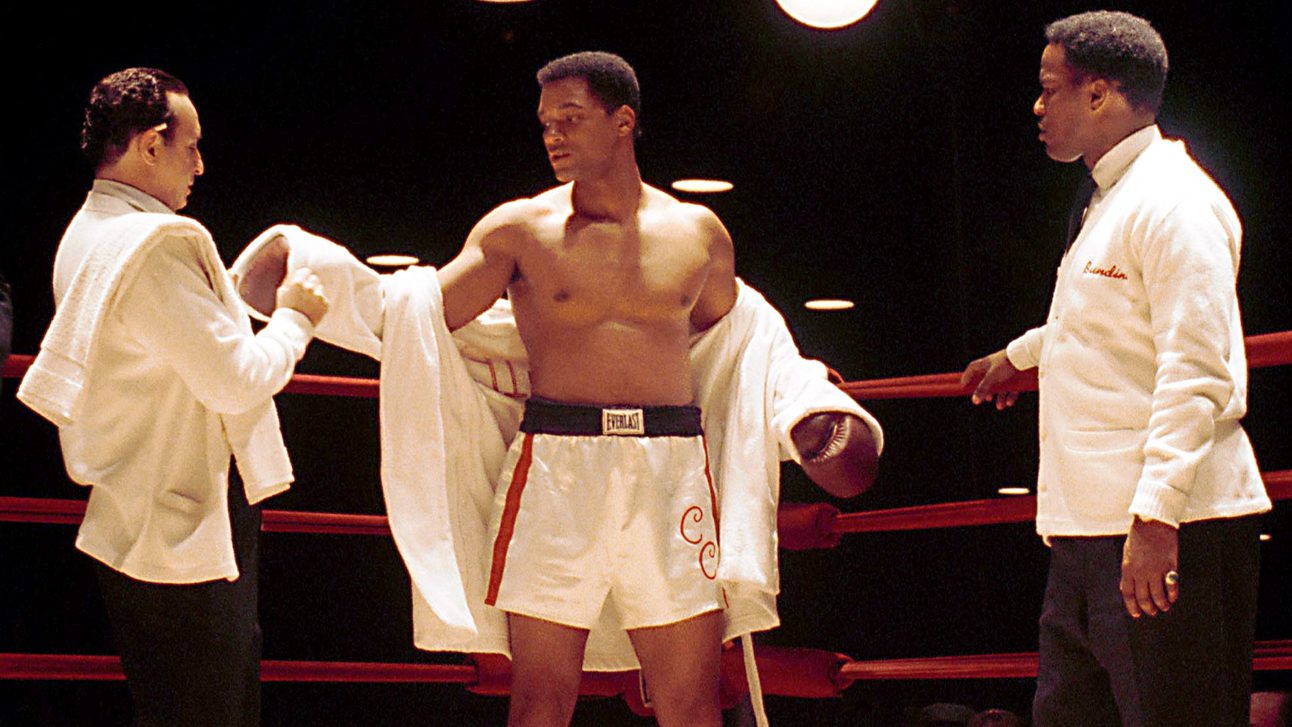 The film opens in 1964 with the Cassius Clay/Sonny Liston fight that gave Ali (Smith) his first heavyweight championship. Then, over the course of the next hour, we are presented with a thumbnail sketch of the boxer's relationship with Malcolm X (Mario Van Peebles). This portion of Ali is perhaps the weakest – the screenplay assumes that viewers have previous knowledge of the schism within the Nation of Islam centered around Malcolm X. Anyone without this background is likely to find the first third of Ali to be fragmentary and confusing. Malcolm X's assassination is shown, but the context is fuzzy. (It's also uncertain why the assassination is depicted here, since all that's important to Ali is the boxer's reaction to the event.) After the death of Malcolm X, Ali moves on to chronicle the fighter's refusal to be drafted to fight in Vietnam, his 1967 conviction on the charge of draft evasion (which stripped him of his title), and the subsequent court appeals that eventually cleared his name. Finally, we see Ali's return to the ring in his quest to regain the heavyweight championship - first from Joe Frasier, then from George Foreman. Along the way, we meet the women Ali has dalliances with – first wife Sonji Roi (Jada Pinkett Smith), second wife Belinda Boyd (Nona M. Gaye), and to-be third wife Veronica Porsche (Michael Michele) – and his male friends and supporters, including the irrepressible Howard Cosell (Jon Voight), trainer Angelo Dundee (Ron Silver), and the enigmatic Bundini (Jamie Foxx). During the height of his career, Ali was reviled by much of White America, seen as a rebellious and divisive figure; however, decades later, the majority view of Ali has softened considerably. In the last years of his life, age and Parkinson's leeched away much of the perceived arrogance that irritated many of Ali's critics. At the time of his death (and afterwards), the late pugilist had become a revered figure. So, while there may be a grittier movie to be made about Ali, director Michael Mann would have had great difficulty crafting it in 2001, when Ali was still alive and had transitioned from the label “egotistical” to that of “beloved.” We must be content with a film is all surface texture – a straightforward account of events with incomplete insight into character motivation. Ali's faults tend to be glossed over (we don't learn about his frequent philandering until the movie is almost over), while his praiseworthy tendencies are overemphasized.

Yet, even though the movie is too long and suffers from an inconsistent tone, the narrative is compelling, as are the performances. Ali encourages viewers – even those who are familiar with the details of the boxer's career – to keep watching. Despite its failings, the movie still shows us things about Ali the human being that we may not be aware of, and uses the man's out-of-the-ring struggles as a lens through which to view the social upheaval that characterized the late-1960s and early-1970s. A great movie would have given us a much deeper reading of the character, but Ali's Ali is good enough to give us a measure of understanding of the forces that drove – and nearly destroyed – the man. Little blame for Ali's weaknesses can be laid at the feet of actor Will Smith, who, like Denzel Washington in Malcolm X, put his whole heart and mind into the performance. The actor bears only a passing physical resemblance to Ali, but, as with Anthony Hopkins in Oliver Stone's Nixon, Smith proves that great acting can overcome the need to look like a twin. This portrayal is at times passionate and fiery, and at others, quiet and thoughtful. Smith's Ali is a portrait of a man who was a fighter both inside and out of the ring. His work here will force those who doubted his selection to eat their words.

Smith casts such a long shadow that no one else appearing in the film can be considered as anything more significant than a supporting player. In fact, only a couple of these co-stars attract real notice. Jamie Foxx, who, like Smith, is better known for comedy than drama, offers an effective representation of Bundini, Ali's cornerman (the one who came up with the phrase, "Float like a butterfly, sting like a bee"). Then there's Jon Voight's interpretation of legendary sportscaster Howard Cosell, whose on-screen verbal sparring and off-screen friendship with "the champ" would mark a cornerstone of Ali's public life. Unrecognizable under layers of garish makeup, Voight at times looks like a moving, talking waxwork. But the voice and inflection are perfect, and, every time Voight opens his mouth, he becomes Cosell.

There's no debating that Ali could have been a far more impressive motion picture than what Mann has brought to the screen. But lamenting what might have been does a disservice to what is there. Ali tells an involving story of individual heroism, and does so in a manner that keeps the audience involved and interested. In the genre of boxing movies, Ali falls short of the likes of Raging Bull, Rocky, and The Hurricane, but, just because this movie doesn't connect with every punch should not disqualify it from consideration as a way to spend a Saturday night.