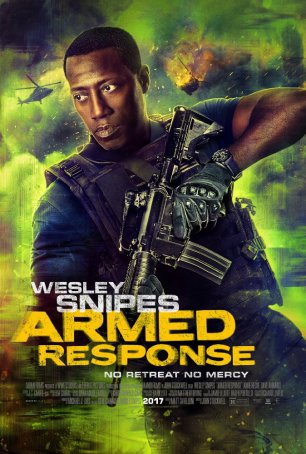 To give director John Stockwell and screenwriter Matt Savelloni, at least Armed Response isn’t the generic shoot-’em-up I was expecting. There are some legitimately intriguing ideas explored in the film and, familiar though the concept of a newly-sentient AI may be to science fiction fans, it’s rarely explored in the action/horror/thriller realm. Unfortunately, although there’s an opportunity here to do something compelling, that opportunity is largely wasted. Perfunctory characterization, lackluster acting, an inability to sustain tension, and an incoherent ending waste most of the goodwill resulting from the premise.

One of the most insulting aspects of Armed Response is the characterization of Gabriel (Dave Annable). He’s the super-genius scientist responsible for The Temples, highly sophisticated computer “lie detectors” with the ability to read small physiological cues in a subject. When the movie opens, Gabriel is a broken man. As we learn via flashback, he has recently lost a daughter in a tragic accident. Now, he drowns his sorrows in a bottle. However, instead of this becoming a key aspect of Gabriel’s personality, this is little more than a plot device to explain why he hasn’t been monitoring the recent development of The Temples. Once he is reunited with elite soldiers played by Wesley Snipes and Anne Heche (among others), one would never guess there’s a gaping hole in his emotional health.

An inordinate amount of Armed Response features characters wandering around in dark rooms and corridors or crawling through equally dark air vents. It’s evident that Stockwell is trying his damndest to develop a sustained atmosphere of suspense and tension, but his attempts are fruitless and the scenes seem to go on forever. Why don’t they work? Perhaps because the characters are interchangeable stereotypes lacking personality. Perhaps because the camerawork is generic. Perhaps because the setting is too sterile to promote the kind of eeriness necessary for viewers to start gripping armrests with white knuckles.

What starts out as a seemingly straightforward thriller gradually devolves into a sci-fi tinged horror/slasher film. There are some creepy individual scenes, such as one in which Gabriel “discovers” what’s on a missing fame of security footage. The mystery of what’s really going on is also passably interesting, at least up to the point of revelation. Of course, that’s always the problem with mysteries. The journey is more interesting than the end point.

Speaking of the ending, Armed Response turns into a chaotic mess as it stumbles toward its climax. In addition to being confusing and lacking anything resembling a coherent or satisfactory resolution, a lot of what happens doesn’t make sense from a logical perspective. Of course, there’s a lot of shooting, plenty of blood and gore, and redemption where necessary. The marginally interesting aspects of Armed Response’s DNA have been forgotten by this point. It’s all about injecting a little adrenaline & testosterone into a mix that, to this point, has been lacking in both.

Perhaps the problem is that, at the outset, the filmmakers had aspirations of making Armed Response something a little different. However, along the way, someone convinced them that there wasn’t an audience for that kind of film so they compromised. The resulting hybrid is interesting only in that it shows how not to make a sci-fi/action/thriller/horror movie. The budget isn’t the issue – plenty of other, better productions have been made with less money. Instead, it’s the lack of a clear direction and vision that leads to something haphazard, sloppy, and not remotely viscerally compelling. Although it could be argued that an exploration of the more cerebral aspects of Armed Response might not have been financially successful (although Ex Machina could represent a counter-argument), it’s hard to imagine that the final cut of the film has more commercial potential.