Although Broker represents a step down for renowned Japanese director Hirokazu Kore-eda following the successes of 2013’s Like Father, Like Son and 2018’s Shoplifters, it nevertheless highlights one of the filmmaker’s strengths – the ability to find compelling truths underneath a veil of sentimentality. With a less probing screenplay and an amplification of the manipulative elements, Broker could have been a generic melodrama. However, Kore-eda strives for something more thought-provoking. So, to go along with the main themes related to the nature of family and love, he includes ruminations about the ethics of adoption – how it is handled and what its implications are on those involved.

With 2019’s The Truth, Kore-eda first stepped outside his native Japan, where all of his previous features had been set. Broker takes him to South Korea, providing an opportunity to work with Song Kang-ho (Parasite), with whom he had long desired to collaborate. Also in the cast are Gang Dong-won, who impressed Kore-eda in the 2010 South Korean action film, Secret Reunion (which also starred Song); Bae Doona, who previously appeared as the title character in Kore-eda’s 2009 oddball concoction, Air Doll; and South Korean singer-actress Lee Ji-eun. Central to the storyline is the concept of a Baby Box. Baby Boxes are receptacles that allow mothers to anonymously surrender a newborn they are unwilling or unable to care for. They are installed in designated locations and have an exterior door that locks once an infant is placed inside and an interior door that allows the retrieval of the baby by an authorized person. Although not popular in Kore-eda’s home country, there are common elsewhere, especially in South Korea. There are three prongs to the film’s narrative focus. The first is a young woman, So-young (Lee Ji-eun), who uses a Baby Box for her newborn, Woo-sung (although she leaves the child outside of the box rather than placing him within). The second are the “brokers,” Sang-hyeon (Song Kang-ho) and Dong-soo (Gang Dong-won), who abduct the baby to facilitate an illegal adoption. The third are the detectives, Soon-jin (Bae Doona) and her colleague (Lee Joo-young), who are involved in a sting operation but develop sympathy for the targets of their investigation.

After abandoning Woo-sung, So-young experiences a change of heart. Upon returning to get him, she discovers that Sang-hyeon and Dong-soo are caring for the baby, getting him ready to be sold to a prospective (and wealthy) buyer. That’s when So-young becomes complicit – not only helping to vet candidates but taking a cut of the proceedings. As the adults get to know one another, it becomes apparent there’s a lot more going on than human trafficking. Sang-hyeon’s family is falling apart – his wife has left him and he rarely sees his daughter. Dong-soo was abandoned as a child and has never gotten over the unanswered questions about his mother and her circumstances. And So-young hides a secret that the police exploit in their efforts to entrap Sang-hyeon and Dong-soo. 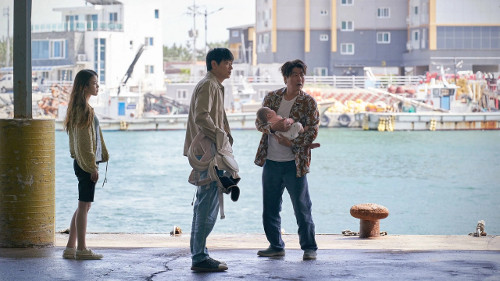 As with Kore-eda’s other films, there are no easy answers to difficult questions. Is it better for Woo-sung to remain with a loving mother who will ultimately be unable to care for him? Or for the child to be sold to a couple who can provide him with a life of privilege? Do the ends justify the means? Kore-eda doesn’t tackle the wider subject of baby-selling in general but instead focuses on specific situations in which a mother surrenders a child anonymously. How many of these women look back on that moment with regret?

Broker deals with deeply philosophical questions and captures strong emotions without falling off a melodramatic cliff. That’s partly due to the competence of the cast but it’s also related to the film’s tone. Kore-eda’s screenplay interweaves moments of quirky humor with the dramatic elements, giving the production a lighter touch. He also doesn’t favor the nihilism of some of his contemporaries so the resolution offers shades of optimism, even if aspects seem contrived.

The cinematography captures the character of the setting (in particular, the city of Pohang) and Jung Jae-il’s score, relying strongly on piano compositions, lends a contemplative element to the quieter scenes. The production feeds both the intellectual and emotional appetites of those who appreciate intimate motion picture experiences and that seems almost as foreign in today’s American cinematic climate as the language spoken by the characters.