Everything Everywhere All at Once (United States, 2022) 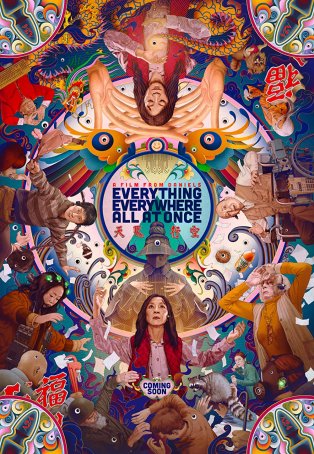 These days, everyone wants a multiverse movie – Marvel, DC, and now the guys who made Swiss Army Man. If nothing else, Everything Everywhere All at Once shows that it can be done without committing a nine-figure sum to the production budget. That’s because, although it’s primarily an action movie with fantasy pretentions, the latest feature from “Daniels” (the moniker for Dan Kwan & Daniel Scheinert) is, at its heart, about the bond between mothers and daughters with all the resentment, rivalry, and love that it entails.

Everything Everywhere All at Once has been rightfully praised in many corners for its wit and inventiveness. Both are present. Although Kwan & Scheinert have something serious to say, they have a lot of fun doing it. There are some laugh-aloud moments but not much tension – multiverse stories, where the stakes are theoretically high, tend not to be very suspenseful because it’s impossible for the human mind to grasp the cosmic enormities of the scope, regardless of how the filmmakers attempt to dumb it down. The movie maintains its tongue-in-cheek approach until it comes time to plumb the emotional core. Along the way, we see unorthodox things like a man consuming lip balm, philosophizing rocks, a woman using a leashed dog as a weapon, anal plugs as a means to enhance martial arts capabilities, and people with hot dogs for fingers. Oh, and don’t forget the puppet-master raccoons. (Davy Crockett never had it like this.) 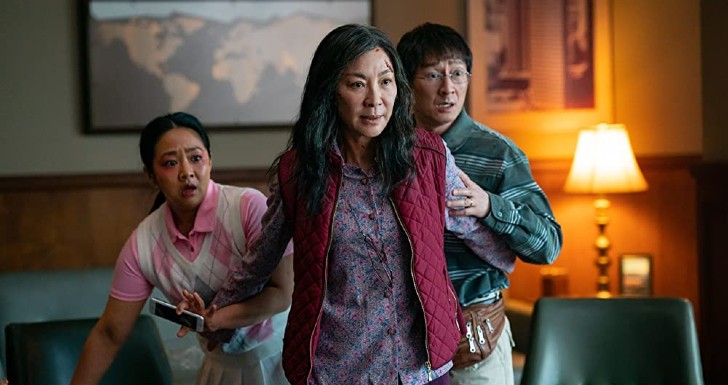 One problem the directors are unable to conquer is how to corral the vastness of the multiverse. There’s too much repetition as they try to show how the temporal butterfly effect impacts the characters. As a result, while the movie has tremendous momentum for the first 45 minutes, there’s a lengthy lull of nearly an hour where replication is a primary characteristic. Everything Everywhere All at Once is probably a half-hour too long and there are times past the midpoint when all the cleverness starts to run thin. These problems are straightened out for the climax – the movie “sticks” the landing.

The narrative starts by introducing us to the dysfunctional Wang family: wife Eveyln (Michelle Yeoh), a traditional Chinese woman with Type A tendencies; daughter Joy (Stephanie Hsu), a lesbian who has grown tired of her mother’s constant criticism; and husband Waymond (Ke Huy Quan), a timid man who wants a divorce. Also in the mix is Eveyln’s father, Gong Gon (James Hong), who lives with the family but whose mind is so addled that he isn’t the imposing man he once was. The Wangs run a laundromat that’s currently being audited by the IRS and things start getting weird when they pay a visit for a talk with auditor Dierdre Beaubeirdra (Jamie Lee Curtis). That’s when Waymond starts acting strange, making odd pronouncements and encouraging Eveyln to do things that don’t make any sense. When she does, all hell breaks loose and she soon learns that the multiverse is under threat from a powerful entity called Jobu Tupaki, whose powers to control chaos are undermining countless universes. Jobu Tupaki is hunting down Evelyns everywhere for a reason that ultimately becomes apparent. In order to save the multiverse, Eveyln must let go of the ordered structure of her mundane life and become the hero whose promise is evident in the other Evelyns across the multiverse. 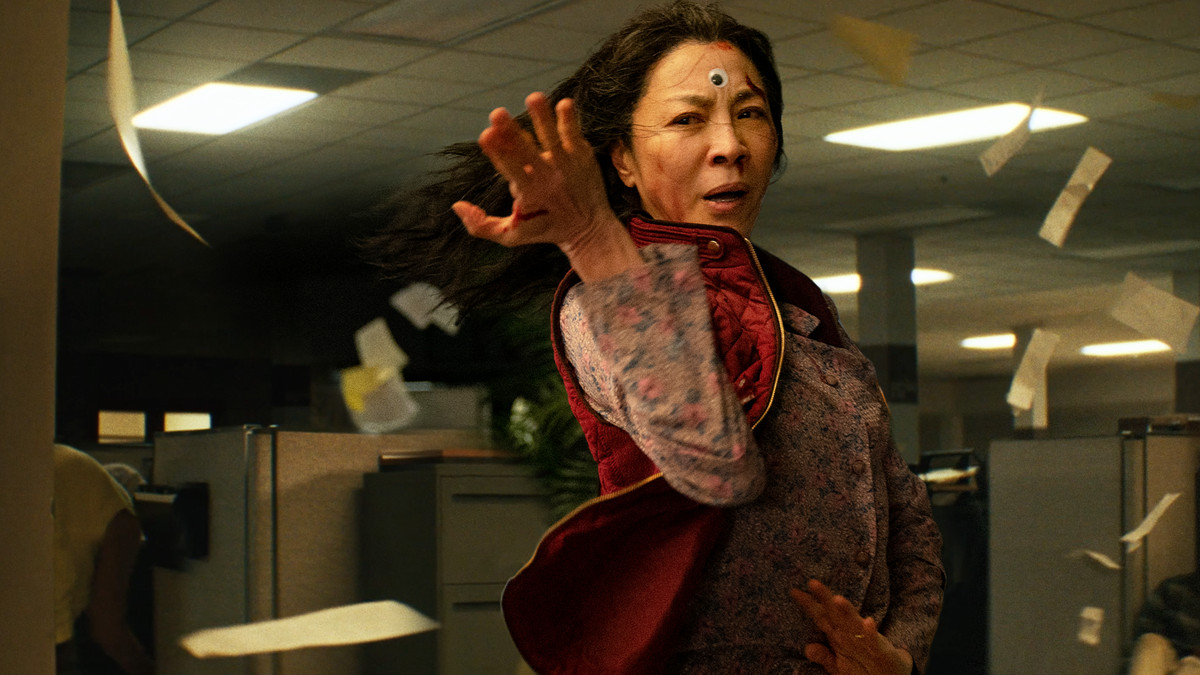 Kwan & Scheinert are not scientists, but then neither are most of the storytellers venturing into the minefield of multiverse narratives. The movie obfuscates its mammoth plot holes by doing some very silly things (the MacGuffin is a giant bagel) and putting the focus on martial arts fights and Michelle Yeoh’s multifaceted performance. The martial arts sequences aren’t the best or the most kinetic we’ve seen but they are among the most unusual. Although body doubles were used for some scenes, Yeoh (age 59 at the time of filming) continues to show the poise and elegance that earned her a loyal following during the ‘80s (when she went by the name of “Michelle Khan”) and the ’90s (when she headlined Crouching Tiger, Hidden Dragon with Chow-Yun Fat). The astoundingly prolific James Hong (he has hundreds of credits dating back to the ‘50s) has one of his best live-action appearances since Big Trouble in Little China. Jamie Lee Curtis is unrecognizable with or without the hot dog fingers.

Multiverse stories are never as simple as they seem to be, primarily because the underlying concepts are rarely explored with any rigor. They are plot devices that allow for Groundhog Day­-like scenarios to play out. Everything Everywhere All at Once offers a devil-may-care approach and a deliciously wicked sense of humor, a top-flight performance from Michelle Yeoh, and an emotionally true central theme, all of which are sufficient to trump any multiverse-related problems. Although it runs too long, it’s nevertheless an enjoyable and satisfying romp through the lives of one woman who makes “being the worst of her selves” an asset.

Everything Everywhere All at Once (United States, 2022)