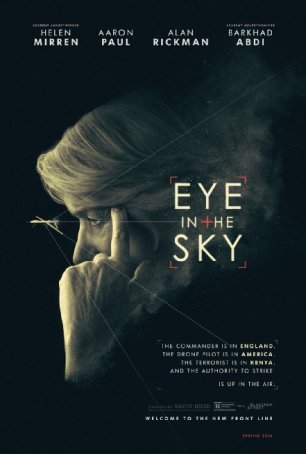 Eye in the Sky provides a comprehensive cross-section of the logistics, procedures, and tolls associated with something that’s now taken for granted in modern warfare: a drone attack. For the average citizen, this seems to be a relatively straightforward situation - locate a target; fly an armed, unmanned aircraft to the scene; launch the weapon; and fly post-attack reconnaissance to determine if it was successful. As Gavin Hood’s film shows, there’s a lot more to it than that oversimplified outline. Terms like “legal cover”, “rules of engagement”, and “collateral damage” play a big part.

Eye in the Sky reminded me of United 93 - not necessarily in terms of the subject matter but because of the apolitical, clear-headed manner in which it approaches an act. Eye in the Sky isn’t based on any one particular incident but instead draws from many. There have been enough drone strikes that details have emerged about how these things are handled, what risks are deemed acceptable, and how the pilots cope with the immense stress under which they’re placed. The 2014 film Good Kill (with Ethan Hawke) might make a good companion piece to Eye in the Sky.

The situation is straightforward. Terrorists have gathered in a small house in a village in Kenya. Three governments have been involved in tracking these men and women (two of whom are British nationals and one of whom is U.S. citizen) to this location - Great Britain, the United States, and Kenya. The military operation is under the command of Colonel Katherine Powell (Helen Mirren), who takes her marching orders from Lt. General Frank Benson (Alan Rickman). The drone pilots, Steve Watts (Aaron Paul) and Carrie Gershon (Phoebe Fox), are based in America. Surveillance confirms that the terrorists are present but reveals something chilling: explosives being prepped for an imminent suicide bombing. Powell determines that the drone must strike quickly and decisively. But the presence of a little girl in the blast radius complicates matters for those watching from London. 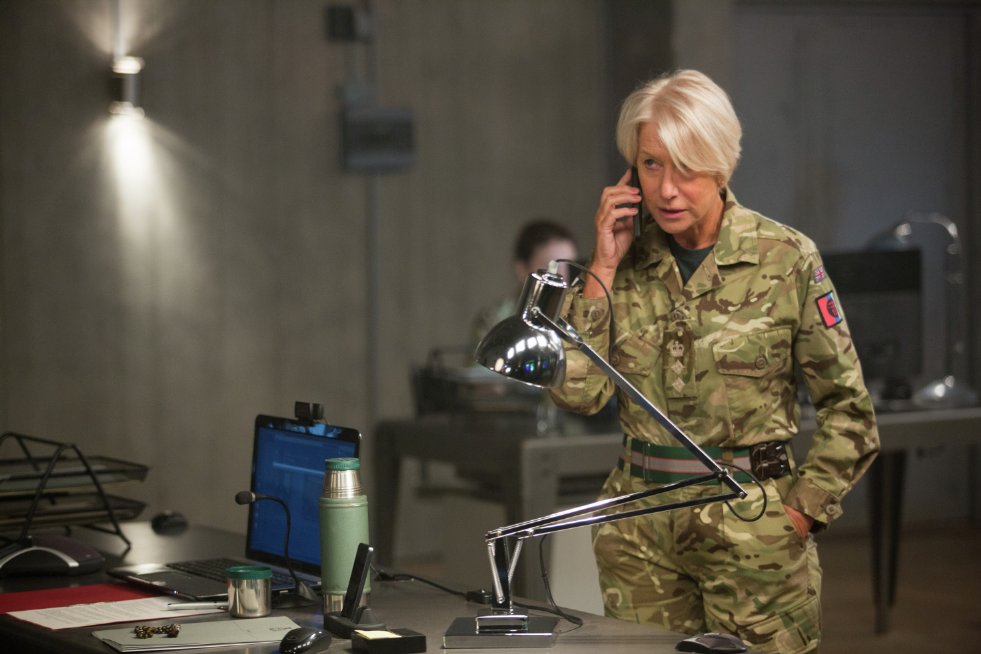 The firing of a single hellfire missile requires multiple approvals. The military leaders - in this case, Col. Powell and Gen. Benson - must confirm that the objective, killing several high-value targets and preventing a terrorist action - will be met. Lawyers must agree that the strike is legal. And political representatives must weigh the pros and cons of how the news will play in the media. There’s not much disagreement that the terrorists have to be stopped (although one voice argues that the objective should be “capturing” rather than “killing” - at least until a terrorist puts on a suicide vest). However, when it becomes apparent that one innocent girl has a high probability of dying, the stakes are raised. If she dies along with the terrorists, who wins the propaganda war? And what if footage of the attack, despite being a top secret mission, finds its way to YouTube? Before it’s all over, the U.K. Prime Minister and U.S. Secretary of State are consulted.

Then there are Watts and Gershon, two pilots who have never participated in any attack. They’re accustomed to flying “eye in the sky” drones - those that observe and record. Emotionally, neither is prepared to pull the trigger, especially when their close-up monitoring shows the girl going about her daily routine, unaware that death may soon rain down upon her. The psychological toll of participating in an action like this (which in real life has left some pilots with PTSD) is conveyed honestly and powerfully.  Sometimes antiseptic killing isn’t at all clean and, although the hardware and imagery may mimic video game controls and visuals, the pilots are all-too-aware that they are about to end an innocent life.

Eye in the Sky doesn’t sympathize with the terrorists. It’s clear what will happen if they aren’t stopped. The arguments against killing them have nothing to do with their guilt. At first, it’s a legal question - whether the drone has the right to kill American and British citizens, depriving them of due process. Once that’s resolved, it becomes about collateral damage. The coldly dispassionate contention (to which Powell and Benson subscribe) is that the greater good outweighs the immediate and unfortunate consequences. It’s not easy to accept, however, watching images of the little girl selling the loaves of bread that provide her family with much needed income. Difficult choices and consequences - these things lie at the core of Eye in the Sky’s drama. Nothing is simple or clean-cut. It’s 12 Angry Men in a different arena. There’s no “right” or “wrong” - only points and counterpoints. 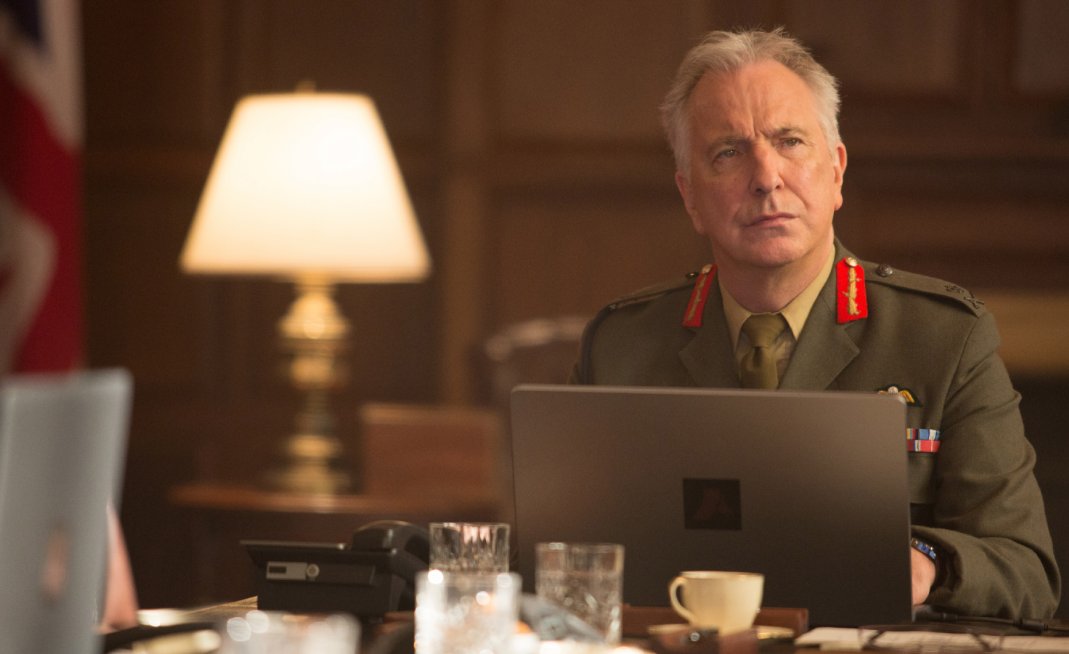 The real-time format enhances the suspense. Although this is primarily a dramatic piece, there are times when the pacing makes it feel like a thriller. Tension arises from two aspects: whether the terrorists can be stopped and whether the girl will move out of the danger zone.

Quality acting enforces the sense of verisimilitude.  In his swansong, Alan Rickman reminds us that, although he may be remembered best for Die Hard and the Harry Potter movies, he was capable of a variety of roles one normally associates with character actors. Helen Mirren is credible as the tough-as-nails Powell, a military officer whose obsession with killing these terrorists has consumed her for six years but who recognizes the potential for tragedy in finally achieving success. Aaron Paul continues to expand beyond his Breaking Bad persona; despite limited screen time, he provides viewers a window into his character’s inner conflict.

Eye in the Sky is compelling, offering the best elements of a drama and a thriller. The film is philosophically challenging because, although it doesn’t “guide” an audience into picking a side, it illustrates facets of a complex issue without bias. Productions of this sort rarely appear outside of Oscar season and, when they do, viewers who care about intelligent, well-made movies would be remiss not to seek them out.