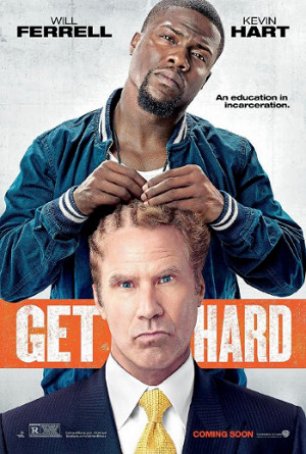 Get Hard is a Will Ferrell movie that comes with all the strengths and weaknesses implied by the designation. Although the marketing campaign plays up the Ferrell/Kevin Hart "buddy" angle, the film skews more toward Ferrell's hit-and-miss brand of comedy than Hart's raucous, high energy niche. That's not to say that Hart fails to make his mark but Get Hard feels like a close cousin to Anchorman. Although Ferrell's name doesn't appear in the WGA-approved screenplay credit, his fingerprints are all over the production. Whether that's good or bad depends on your opinion of the former SNL regular.

Get Hard pours Ferrell into a character mold with which we have become familiar. Stockbroker James King, a naïve, awkward man-child, is unaware of how contemptuously others view him. In his mind, he's the hero of his story. Much of the humor germinates from the conflict between James' rose-colored worldview and the pragmatic perspectives of everyone else. The comedy is uneven - some of the bits are hilarious, others mistake extreme vulgarity for the path to uncontrollable laughter, and more than a few strain a joke beyond the point when it's funny. There's nothing new in Get Hard - this is a staple of Ferrell's oeuvre and there's little reason to assume it would change for this outing. 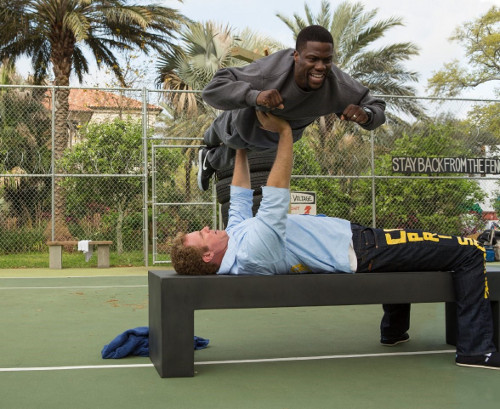 James is working in the lap of Wall Street, wheeling and dealing like a pro but never breaking the law. He's making so much for his boss (Craig T. Nelson) that he's looking at the likelihood of a partnership. Plus, to sweeten things, he's engaged to the boss's impossibly hot, materialistic daughter, Alissa (Alison Brie). James' fairy tale world comes crashing down when the Feds rush in and cuff him during his engagement party. Soon, after being convicted of various securities-related felonies, he's looking at 10 years in San Quentin. The judge gives him 30 days to get his affairs in order. That's when he hires car wash entrepreneur Darnell (Hart) to provide him with "lessons" about how to survive in prison without being victimized. James is of the mistaken impression that, because Darnell is black, he's a veteran of doing "hard time." Darnell doesn't disabuse him of this notion because he needs $30,000 to relocate his family so his daughter can go to a school where she won't have to pass through metal detectors at the front door.

Get Hard gains some mileage from anti-stereotype humor (for example, gangbangers talking about stock profiles) and satirizing easy targets (white supremacists). One running gag is that James has trouble getting the hang of profane insults, but this grows tiresome after a few incidents. There's also an unfunny bit about a sex act (compete with a prosthetic) that goes on for far too long. At one time, comedy along these lines would have been considered risky but, with the shock value neutered through repetition in other films, it's tiresome. (Another recent film, Unfinished Business, did something similar with equally flaccid results.) 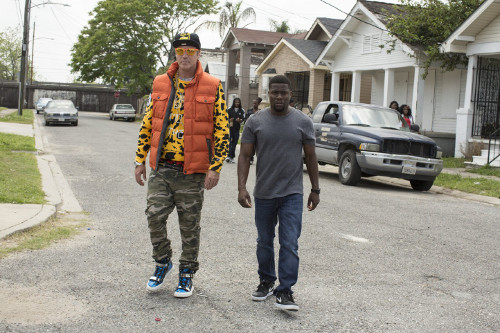 Kevin Hart's presence adds an element of much-needed energy to a movie that too often plays by the numbers but Hart isn't given enough screen time or leeway to jolt the production. The film's best scenes are those in which Darnell "trains" James. The buddy element is adequately developed but there's nothing special or memorable in this odd coupling. And Get Hard really bogs down when it strays into the quasi-thriller territory of investigating the frame-up that led to James' prison sentence.

One doesn't anticipate masterpiece level comedy from a movie with a double entendre-laden title like Get Hard so, to a certain extent, it can be said to meet expectations. This is a mildly diverting 100 minutes for fans of Will Ferrell's brand of humor. The actor has done better work in both dramatic and comedic roles but this shtick appeals to a sizeable piece of his fan base. Dumb, juvenile comedy has its place when it's funny. Unfortunately, too often in Get Hard, it's not.