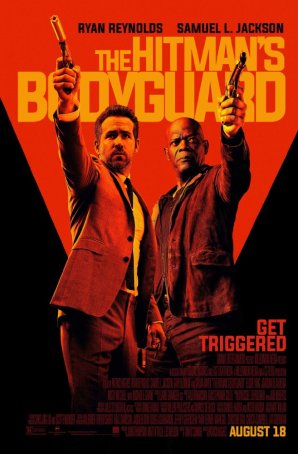 The Hitman’s Bodyguard is a throwback to the mixed-race buddy films of the 1990s. Think Bruce Willis/Damon Wayans in The Last Boyscout or Willis (again)/Samuel L. Jackson in Die Hard with a Vengeance. Those movies, and others like them, emphasized the action elements but leavened the thriller aspects with a liberal dose of comedy. The relationship and interaction between Deadpool’s Ryan Reynolds and Samuel L. Jackson is like the one Jackson shared with Willis 22 years ago. As in all movies of this sort, the physical journey has an emotional component as the two antagonists develop a grudging respect and affinity for one another. Of course, that’s not to discount the explosions, shoot-outs, and chases that occur along the way.

For me, The Hitman’s Bodyguard is the epitome of what a summer movie should be. There’s sufficient spectacle to satisfy the “wow!” factor, some hammy performances by actors in their wheelhouses, a half-dozen solid laughs, and a script that, if not likely to be called “clever” or “smart”, doesn’t demand a frontal lobotomy to be enjoyed. Unfortunately, this brand of mass-market entertainment is at least a decade past its “sell by” date. It’s old school and should be seen (and enjoyed) as such. Lionsgate/Summit recognizes this and that’s why The Hitman’s Bodyguard is coming to multiplexes in mid-August instead of earlier.

When we first meet him, Michael Bryce (Ryan Reynolds) is on top of the world. Working as a AAA-rated protection services agent, he has never lost a client – until now. Predictably, his prospects die along with a Japanese arms dealer. Two years later, he’s down-and-out when he gets a call from the ex-love of his life, Interpol agent Amelia Roussel (Elodie Yung). She needs his help. She and a key witness against vile dictator Vladislav Dukhovich (Gary Oldman) are holed up in a safe house. Their convoy was attacked by Dukhovich’s men and they’re the only survivors; Amelia needs Michael to shepherd her charge safely across Europe to the Hague so he can give evidence in court. Michael reluctantly agrees and, as soon as he discovers who the witness is, he wishes he hadn’t. Darius Kincaid is a notorious hitman who has killed more than 250 people and has made 28 attempts on Michael’s life.

The film’s tone is light & violent, mixing banter, physical comedy, and high-octane action. There are a couple of times when it goes dark – too dark, actually, for a movie of this nature. On one occasion, a woman and young child are executed (this happens off screen but there’s no doubt what’s going on). Later, there’s a fairly brutal torture sequence involving electricity and water (a throwback to Lethal Weapon). For the most part, director Patrick Hughes shows confidence in handling the large-scale set pieces in his playground (having graduated from The Expendables 3 undoubtedly helped). A few of the chases go on too long but that’s not unusual in action flicks.

The chief pleasure of The Hitman’s Bodyguard is the interplay between Reynolds and Jackson. The former is the straight man and Jackson is, well, Jackson. This is the profanity-spewing, yelling-at-the-top-of-his-voice tough guy we’ve come to love and Jackson plays it to the hilt. He laughs, he smirks, he kills without compunction. This isn’t a PG-13 movie where people get knocked out instead of wiped out. As the body count mounts, we don’t doubt that Darius has killed 250 people. Reynolds is content to play second fiddle, allowing Jackson to hog the spotlight… and the movie is all the better for it.

The supporting cast is led by the lovely Elodie Yung (Elektra in the Marvel/Netflix productions) as Michael’s former (and possibly future) love interest. Gary Oldman does his usual frothing-at-the-mouth bad guy routine. Joaquin de Almeida does his usual sneaking betrayal routine. If there’s a surprise, it’s Salma Hayek, who tries to out-curse Samuel L. Jackson and, on a profanity-per-minute basis, succeeds.

The Hitman’s Bodyguard is exactly what the average movie-goer would expect from something with this title and these actors and, judged on that basis, it rarely misfires. It’s an engaging and often amusing popcorn movie that doesn’t demand anything more from an audience than that they sit back and have fun. Older viewers will probably enjoy it more than younger ones so, even if it doesn’t shoot up the late summer box office, it should have a healthy afterlife on home video. Worth a look if you’re in the mood for Jackson, Reynolds, and the mayhem they create.