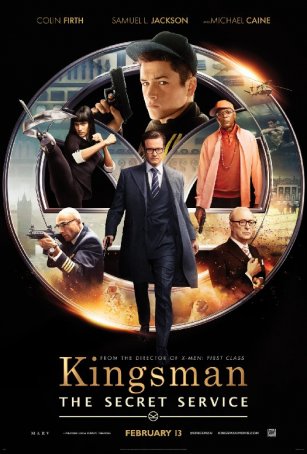 Kingsman: The Secret Service is to the '60s British spy movie genre what Kick-Ass is to today's motion picture superhero movement. Part homage, part cartoonish spoof, and part high-energy actioner, Kingsman feels right at home with the likes of Kick-Ass and Layer Cake, two previous efforts from director Matthew Vaughn. (The latter stared a pre-007 Daniel Craig and is sometimes credited for getting the actor the coveted Bond role.) Based on a comic book, Kingsman occasionally betrays its roots but Vaughn has adapted it to fit his unique approach. Fast-paced with a morbid sense of humor and copious pop culture references, Kingsman breezes along at a nice clip until it gets a little bogged down during its final third. 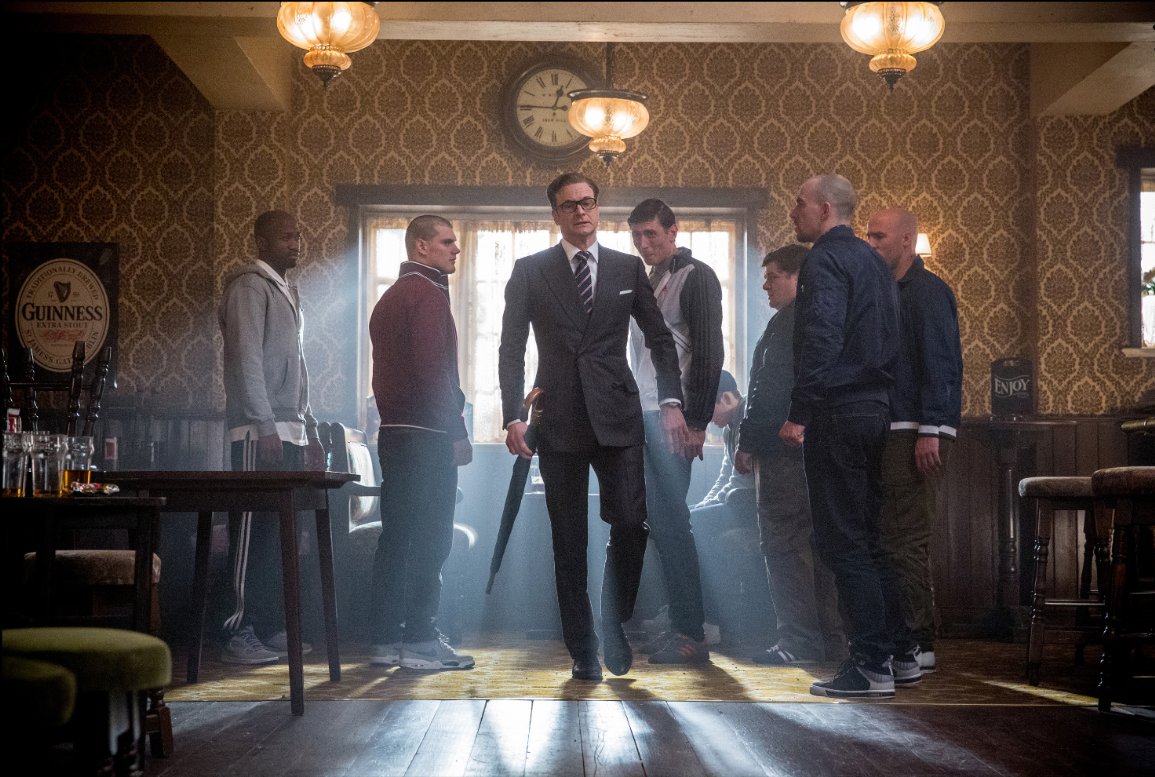 The film's most obvious inspiration is the Connery Bonds (which are openly referenced) but there's an equally evident call-out to another spy series. Michael Caine, the star of The Ipcress File and a couple of other Len Deighton Harry Palmer adaptations, plays the role of Arthur, Kingsman's version of "M." There are also unsubtle references to The Avengers (the '60s TV series not the Marvel movie) and even (would you believe?) Get Smart. Vaughn has a lot of fun frolicking in this playground, doing unexpected things and engaging in a head game of one-upsmanship with Steven Spielberg's Raiders of the Lost Ark. One could argue that the only thing missing from Kingsman is a cameo by a Roger Moore or Timothy Dalton, although Moore at least is present in spirit.

The unlikely action hero of this piece is Colin Firth, who has done a lot in his career but has never previously attempted a mimicry of a David Niven/Moore amalgamation. His Galahad is the perfect embodiment of the gentleman spy who takes out a gaggle of bad guys without rumpling his suit. It's said that Firth did about 80% of his own stunts and this allows Vaughn to shoot the fight scenes without having to resort to a lot of quick cuts and trick camera angles. The double-branched story follows Galahad as he investigates the possible nefarious actions of a multi-billionaire philanthropist named Valentine (Samuel L. Jackson affecting a lisp) while teaching his protégé, Eggsy (Taron Egerton), what it means to be a member of the elite, off-the-radar cadre of spies called "The Kingsmen." These are modern-day knights whose armor is an impeccably tailored (bullet-proof) suit. Galahad calls The Kingsmen an "international intelligence agency operating at the highest level of discretion." 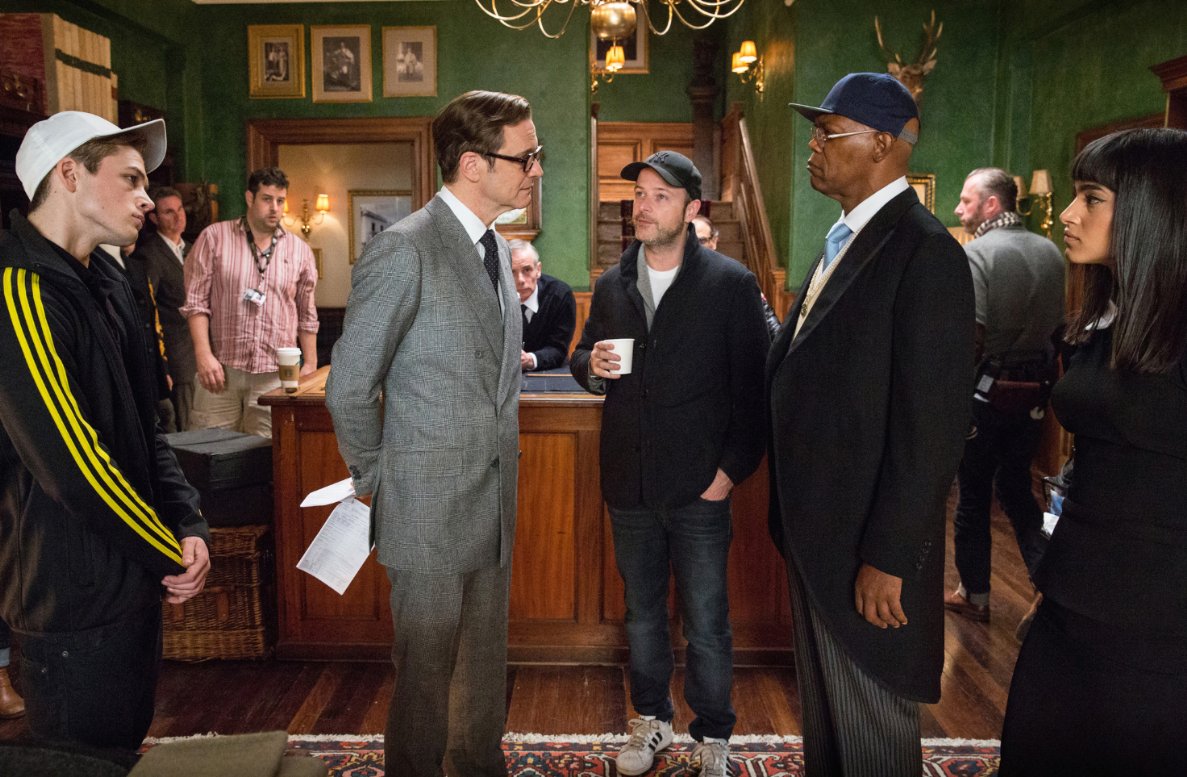 In order to become a Kingsman, Eggsy has to go through a Hunger Games-like contest of elimination where the last one standing gets the vacant seat at the not-so-round table. Most of the candidates are like Edward Holcroft's Charlie - sneering and superior. Eggsy quickly becomes attached to the approachable Roxy (Sophie Cookson), one of only two women seeking to earn the nom de Kingsman of "Lancelot." (The previous bearer of that title having been vivisected by a woman with blades for feet.)

Kingsman features three memorable sequences. The first is a bar brawl in which Galahad displays his talents to an amazed Eggsy. The second occurs in a Kentucky church where the darker side of human nature comes to the fore. And the third… well, let's just say it involves a lot of mushroom clouds. Vaughn goes over-the-top in the right measure. It's a difficult thing to satirize Bond because so many aspects of the 007 series skate close to self-parody. So Vaughn pokes fun without going too far and without losing sight of the fact that, at its heart, Kingsman isn't intended to be a straightforward comedy. The film's irreverence is its greatest asset, as when Valentine and Galahad confront each other with a knowing nod toward how that encounter would have been handled by Connery. 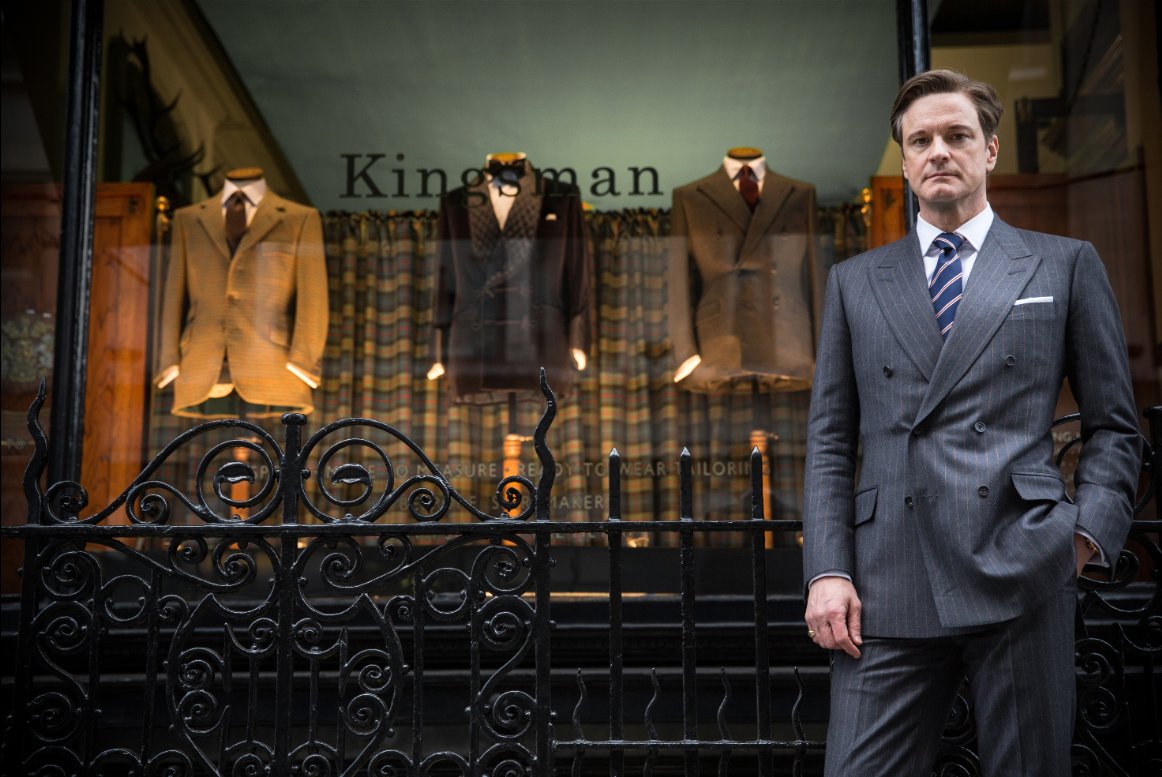 Firth, representing Kingsman's marketable star, is joined at the top of the marquee by international newcomer Taron Egerton, whose previous credits have primarily been on U.K. TV. He has plenty of sex appeal and charisma and looks great in a suit. Samuel L. Jackson surprisingly tones down his usual tendencies to play a megalomaniac with a scarily credible motivation. Mark Strong, who often plays a heavy, gets a few opportunities to shine as Merlin, Arthur's right-hand man. Small, supporting parts go to Mark Hamill as a rumpled professor and Jack Davenport as an unflappable agent.

Although Kingsman is for the most part an enjoyable experience, it runs too long. There are times, especially during the second half, when it feels repetitive. There are also some pacing issues during the training sequences - the movie works best when Firth and Egerton are sharing the screen rather than when they're doing their own things. (Galahad conveniently ends up in a coma for a while to limit the amount of back-and-forth switching necessary.) It's difficult to assess what could have been pruned from Kingsman's final cut but a little tightening up might have resulted in a stronger, sharper film. Still, when it comes to affectionate spy movie spoofs, this is one of the best, and certainly more engaging than anything offered by the Austin Powers series.