There was a time when the name “Kevin Costner” on a marquee was a guarantee of a major box office haul. Costner, whose good looks overcame his limited range during the early stages of his career, starred in one major hit after another until The Postman didn’t deliver and Waterworld sank. Now, three decades past his prime, Costner is having a nice little renaissance after re-inventing and re-packaging himself as more of a character actor than an idol. No longer a major draw but still a recognizable name, Costner signed on to play Pa Kent in Man of Steel opposite Diane Lane’s Ma. Despite limited screen time, the two evinced enough chemistry that people took notice. One of those people was Thomas Bezucha, who decided to bring the two on board as an older married couple in his adaptation of Larry Watson’s Let Him Go. Casting turns out to be the best thing Bezucha could have done for this uneven screenplay. The pair makes Let Him Go worthwhile even when the storyline is poised to let us down.

The movie is a ‘60s-era (1960s, that is) thriller with a Western flair. The second half, when the thriller elements kick into high gear, is considerably better than the dour, meandering first half (a road trip without a discernible end point). Things liven up considerably once Lesley Manville makes her unforgettable entrance in the full light of a chandelier and immediately starts gobbling up any scenery that isn’t tied down. It can’t be a coincidence that her character is named Blanche. 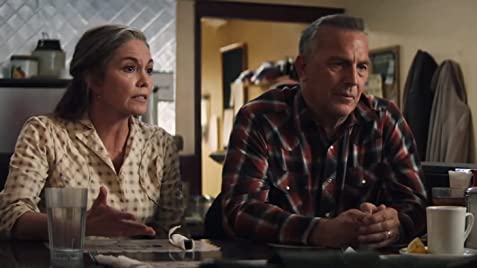 The movie starts by introducing us to a happily married young couple, James and Lorna Blackledge (Ryan Bruce and Kayli Carter), who live on a Montana ranch with James’ father, George (Costner), and his mother, Margaret (Lane). George is a retired sheriff but it’s clear that, at least around the house, Margaret is the one who wears the boots. The younger couple has an infant son who will never grow up to know his father because, before the movie is ten minutes old, James is dead (killed in a freak horseback riding accident). The movie jumps ahead a few years to Lorna’s re-marriage to an abusive, controlling creep named Donnie Weboy (Will Brittain). When Margaret witnesses Donnie battering both his new wife and stepson on a public street, she becomes determined to separate her grandson from his tormentor. But, when she arrives to “discuss” the situation (with Bunt cake in hand), the Weboys have disappeared without leaving a forwarding address. That doesn’t stop Margaret. She packs up the car (a ‘60s-style station wagon) for a trip to who-knows-where. Her goal is to retrieve her grandson and she has brought along her husband’s revolver in case things go south. When she belatedly decides that George could be an asset on the journey, she informs him of her intentions. After a period of indecision, he agrees to come but is less bullish than his wife about the prospects of coming home with a pre-schooler in the back seat. He argues that Lorna isn’t likely to give up her son and taking him away without her permission would constitute kidnapping.

Narratively, one of the more awkward aspects is the insertion of Native American squatter Peter Dragswolf (Booboo Stewart), whose presence cries out “plot contrivance” He is so clumsily introduced that we know he’s going to become important later in the film. Perhaps this is in large part related to condensations made to fit as many of the details of the novel as possible into a sub-two hour running time. There are other instances when the screenplay seems to move too fast or gloss over seemingly important elements. It’s as if the script needed another pass or two before it was ready to be filmed. 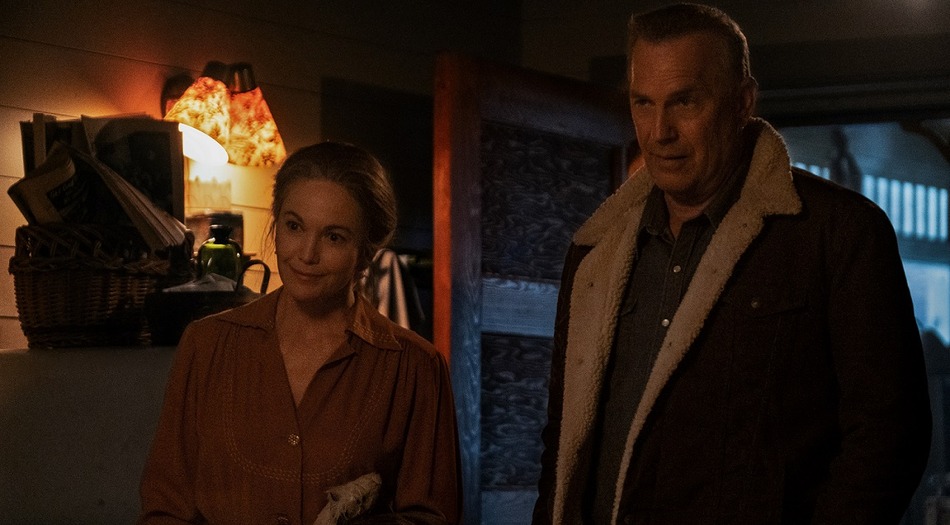 Not long past the midpoint, Let Him Go enters true thriller territory with the Montana couple squaring off against the Weboy clan for “possession” of Lorna and her son. Bezucha executes a couple of high-tension sequences during this portion of the film. The first involves a drive to a secluded ranch for which George and Margaret are separated, with the latter riding in the pickup of Donnie’s uncle, Bill (Jeffrey Donovan), while George tries to keep up. The second focuses on a taut dinner where there’s more on the table than Blanche’s pork chops. The scenes involving physical altercations are well-choreographed but don’t achieve quite the same high level of suspense, although some viewers will find one of these to be disturbing due to its graphic brutality.

Let Him Go often feels like two movies that have been inelegantly spliced together and, as is often the case with such mergers, the discrepancies in tone and intent make for awkward bedfellows. Parts are slow and almost meditative – an exploration of George and Margaret’s marriage and a rumination about getting older and coming to the end. (At one point, George comments that life represents “a list of what we’ve lost.”) The other is B-grade thriller material, complete with violence, gunplay, and a deliciously evil villain. Maybe the Coens could have figured out how to put the pieces together without them being at cross-purposes but the best Bezucha can do is provide an approximation and allow us to enjoy another on-screen pairing of Costner and Lane.