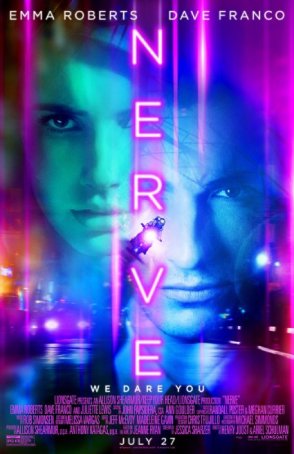 Considering how ubiquitous social media has become in the early 21st century, it’s surprising how few films have used this cultural element as the foundation for a movie plot (rather than just window dressing). Nerve seeks to rectify this oversight. Without duplicating the first-person online gimmick of Unfriended, this production seeks to give us a flavor of a darker aspect of cyberspace without losing track of what’s happening in the real world. In that way, it’s a more concrete, relatable experience than The Matrix or TRON.

“Nerve” is an app. When a user opens it, he (or she) is offered two choices: be a “watcher” or be a “player.” The business model is simple: watchers pay a subscription fee and players are paid out of that pot to complete dares. The watchers vote on what the players are expected to do and the players have the option of accepting or rejecting any dare. If they reject a dare, they’re out. If they bail on a dare, they’re out. But if they complete the dare, they’re given a payment and provided with the option to move to the next round. Their position on the leaderboard is determined by how many watchers are following them. Since the game exists in a legal gray area (someone may have died playing it), there’s a strict code of silence that all players must agree to. Breaking it can have horrific consequences. The film’s first act, which is by far the best of what Nerve has to offer, unfolds with the charm of a romantic comedy. Vee (Emma Roberts) is a wallflower who joins Nerve after being egged on by her extrovert friend (and current player), Sydney (Emily Meade). Vee’s first dare is to go into a restaurant and kiss a random stranger. That stranger happens not to be so random - he’s a plant, another player named Ian (Dave Franco). After Ian does a dare of his own (a delightfully silly lip synch to Roy Orbison), he and Vee become a team when the watchers decide they like their chemistry. Admittedly, Roberts and Franco work better together than separately. Neither shows a lot of range but they click when they share the camera.

Eventually, the movie’s tone graduates from playful to something darker and action-oriented as it morphs into a techno-thriller. The dares become increasingly more dangerous (in some cases, life threatening) and Vee’s motivation switches from emerging from her cocoon to winning. There’s also a question about why Ian is playing and whether his involvement with Vee might be part of a bigger plan on his part. Vee’s friend Tommy (Miles Heizer) discovers evidence that Ian has played Nerve before.

Nerve, which is directed by the Catfish guys, Henry Joost and Ariel Schulman, could have used a technical advisor (or, if it had one, his/her advice should have been followed more rigorously). Although the film does a good job with the surface aspects of a social media game (it’s just a coincidence it’s being released at a time when Pokemon Go has become a phenomenon of Rubik’s Cube proportions), its “insights” into programming and the Dark Web are infantile. These elements are more fantasy than science fiction. This is more in the nature of a nitpick than a major flaw but I can see why a tech-savvy viewer might become exasperated by some of the liberties taken. 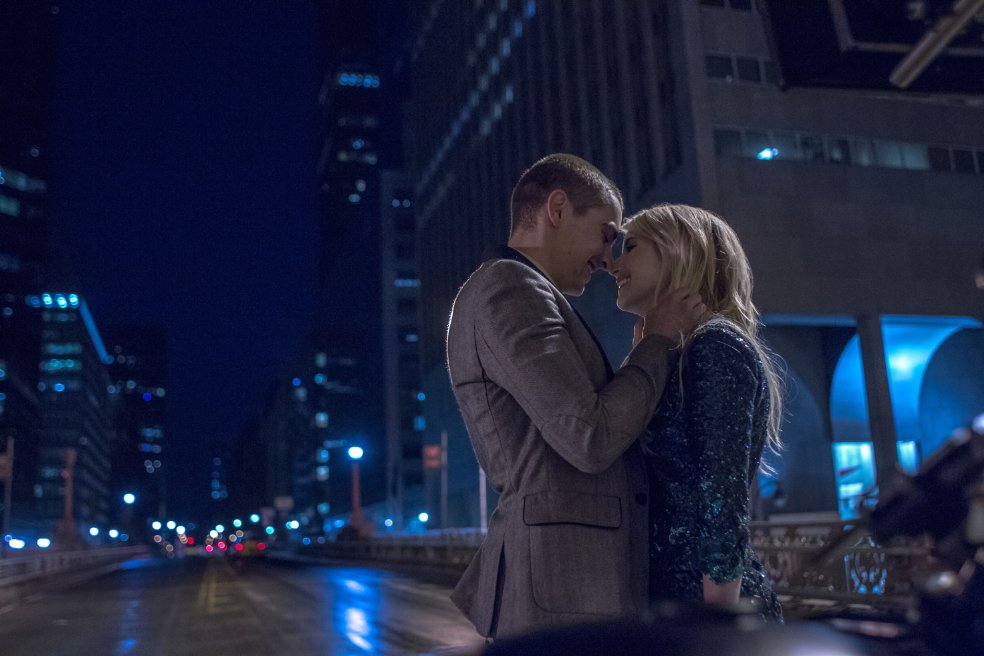 Joost and Schulman use nearly every trick imaginable to keep Nerve’s energy at a consistently high level and to give it a visual uniqueness. Quick cuts, graphically enhanced “maps” of New York, a varied and pulsating soundtrack, and a restless camera all combine to keep the viewer engaged. There are times when the actors seem like avatars navigating an electronic landscape, and I’m sure this was intentional.

Nerve comes with a heavy dose of social commentary. Even as the movie’s storyline begins to creak and groan under the weight of logical and structural flaws toward the climax, the filmmakers amplify their thesis about the dehumanizing effects of social media. One doesn’t have to play a game like Nerve, where all the watchers are granted anonymity, to see how cruel and arbitrary people can be in some online venues (comment boards, for example). The incivility isn’t limited to trolls.  “Normal” people, with their name and identity hidden, can say ugly and misanthropic things. Nerve emphasizes this by taking it to a natural extreme.

Nerve does a better job with its style and pacing than it does with its characters but, ultimately, Vee is likable enough for us to stay on the ride with her. For a late-summer throwaway, the film is surprisingly entertaining - in fact, it held my attention more strongly than many of the season’s disappointing blockbusters.  At only 96 minutes, Nerve is short enough not to overstay its welcome and, despite a lackluster final 20 minutes, it proves to be solidly entertaining.