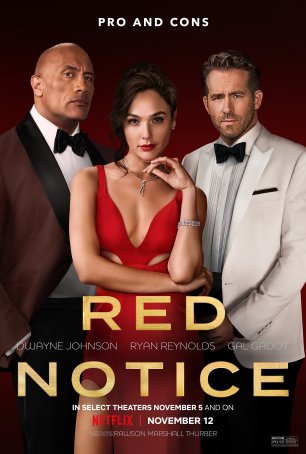 Before being dazzled by the high profile cast of Dwayne Johnson, Ryan Reynolds, and Gal Gadot, perhaps I should have looked a little more closely at the filmography of writer/director Rawson Marshall Thurber. The filmmaker has to his credit such unmemorable titles as Skyscraper (made with Johnson as the star), Central Intelligence (also with Johnson), and We’re the Millers. That’s one-star, one-point-five, and two-stars. Given that, the fact that Red Notice turned out to be watchable should be deemed a win.

But “watchable” doesn’t equate to “good.” This is a passable action-comedy where the action is pedestrian and the comedy isn’t nearly as funny as one might expect. Red Notice has the feel of something written about twenty years ago for a group of B actors that, for some reason, was dusted off and given to a trio of the most bankable stars in Hollywood. I don’t know what Johnson, Reynolds, and Gadot got paid for appearing in this film but we’re probably talking eight figures. Each. That might explain why everything else in the movie from set design to CGI has a cut-rate look. The entire budget was spent on three people, none of whom were writing, directing, shooting, or doing special effects.

This was probably a fun project to work on. The leads seem to be having a good time and that lightheartedness is effectively conveyed. It doesn’t mean much, however, to anyone watching the film and waiting (in vain) for it to get better. As we finally figure out at the end of two hours, this is essentially an “origin story” for a series/franchise that will probably never happen. That partially explains why there’s no real villain to speak of. Red Notice is supposed to be about the chemistry among the three stars (which is dubious at best) and their banter (which could have used a little doctoring by someone with a better ear). Since they’re sometimes on opposite sides, they do a lot of fighting, dodging, and running. Of course, no one really gets hurt. The story is a pastiche of Raiders of the Lost Ark and something by Dan Brown. Or at least that’s what it aspires to be. It’s smart enough (or maybe that should be “smug enough”) to recognize its roots by having one of the characters humming the “Raiders of the Lost Ark March” at one point. Musically, that’s probably the film’s highlight. Still, it’s not a good idea to remind viewers of one of the great action films in something that, even in full sunlight, would be the palest of shadows.

The movie opens with FBI agent John Hartley (Johnson) and Interpol Inspector Das (Ritu Arya) tracking down the elusive and intrepid art thief Nolan Booth (Reynolds), who is about to strike again. This time, his target is one of the three fabled eggs of Cleopatra. His goal is to obtain all of them for a big-time sale (a coup since one has been missing for ages); Hartley intends to stop him. There’s another player in the mix – the mysterious Bishop (Gadot), who has nothing to do with the Monty Python sketch and is instead another art thief. She’s in a friendly (or perhaps not-so-friendly) competition with Booth to see which of them can claim to be #1.

The film’s first big action scene is indicative of what’s to come: a long, somewhat boring chase that involves a lot of jumping and swerving and running with little capacity to elevate the pulse or make us care about the participants. A little later, when Hartley and Booth are incarcerated as cellmates, they jibe at one another with repartee that’s supposed to be funny but is so sophomoric that ‘80s-era Arnold Schwarzenegger would have jettisoned it as being beneath him. Like the underwhelming chase, that’s another of Red Notice’s red flags.

The intended romantic chemistry between Johnson and Gadot fizzles instead of sizzling. I’d more readily believe these two as brother/sister than lovers. The Rock is a more versatile actor than he’s sometimes given credit for but I’ve yet to see him do a good job as a romantic lead. As for Reynolds…he’s stuck in a rut, and that’s not a good thing. Seemingly every character he plays is a variation of the Deadpool persona: snarky, flippant, and unable to take anything seriously. It was annoying in The Hitman’s Wife’s Bodyguard and it’s beyond irritating here.

The movie isn’t all bad and, considering that it can be seen for the price of zero dollars (for Netflix subscribers), it’s a passable diversion. But, aside from watching three high-profile actors pal around and thrown zingers at one another in-between participating in sequences that feel like video game outtakes, there’s not much here. Considering the hype, it’s a disappointment. It might have been better to populate the movie with three unknowns and spend a little more on the screenplay. You can have The Rock, Wonder Woman, and Deadpool, but it doesn’t mean much if they don’t have clever things to say and meaningful things to do.