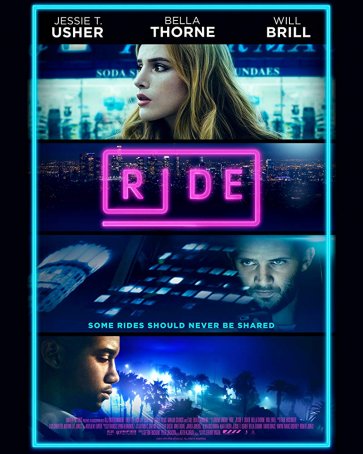 Ride is a slickly-made thriller that takes place almost entirely within the confines of an automobile. Unlike Tom Hardy’s Locke, however, this isn’t a one-man show. In this case, there are three players and the interaction among them provides the movie with its premise and, eventually, its tension. Crisply paced but undercut by hard-to-swallow plot contrivances, the movie doesn’t waste much time, taking only about an hour and a quarter to unspool.

I often complain about movies overstaying their welcome but 76 minutes isn’t long enough for Ride to accomplish what it wants to do: introduce the characters, build a dynamic among them, then ramp up the suspense on the way to an inevitable conclusion. To be effective, Ride needs to nursemaid the slow-build tension but director Jeremy Ungar rushes through too many scenes, almost as if he becomes impatient with all the action in the car and wants to open things up (which he does at the end).

James (Jessie T. Usher) is the L.A. cliché: the struggling actor moonlighting as an Uber driver to pay the bills. (The name “Uber” is never mentioned but the film’s ride service is an excellent facsimile.) On this night, his first customer is a pretty young woman named Jessica (Bella Thorne), who’s cheerful and talkative. By the end of their ride, something has clicked between them and she invites him to accompany her into a club for drinks. But duty calls and he has to decline. Hindsight being 20/20, he should have accepted the offer because his next fare, a grungy guy named Bruno (Will Brill), isn’t nearly as pleasant. Bruno talks a mile-a-minute, has a wheedling, annoying way about him, and likes being in control. He pays James $100 under-the-table to be his chauffeur for the evening, offers another $100 to hear him recite something from Richard II, and, upon hearing about Jessica, demands that James go back to the club and pick her up. Once the three of them are together, the creepy-friendly mask drops and it becomes apparent that Bruno isn’t the nice guy he pretended to be.

The familiarity of the situation – Uber is a fact of life, especially for those who need quick, cheap transportation – is intended to provide viewers with a connection to these characters (or at least James and Jessica – hopefully not Bruno). Ungar hopes that the “this could be me” aspect will amp up the verisimilitude. But the meet-cute between James and Jessica feels forced and unnatural. There’s no chemistry between actor Jessie T. Usher and actress Bella Thorne and I didn’t for a moment believe that these two would ever be more than ships passing in the night. As for Bruno, he comes across more as an irritating pain-in-the-ass than a threatening presence. The way Brill plays him, he’s more annoying than ominous; I was reminded a little of Charlie Day.

The movie shifts into high gear during the final half-hour when the lengthy set-up is completed. Bruno reveals his true self (which will come as no surprise to anyone watching – the guy’s vibe is off-the-charts weird from the beginning) and uses a gun to enforce his will on his fellow passengers. The movie misses opportunities to elevate the stakes, such as when Bruno forces James to conduct a gunpoint convenience store robbery or when Jessica has to go shoplifting, by not regarding those incidents as more than stand-alone moments with no follow-up.

It’s hard to say whether Brill’s performance is the result of a miscalculation on Ungar’s part or is limited by the actor’s capabilities. Usher and Thorne are better. He has some nice moments (although the Shakespearean soliloquy is over-the-top) and she exudes a restrained, playful sensuality. Ride’s brisk pace staves off any restlessness that could result from a movie that’s all talk and little action. Rob Givens’ cinematography is crisp and clear, giving us some memorable images of nighttime L.A., and there’s never any sense of claustrophobia within the car’s confines. Like an average Uber ride, the film passes quickly and doesn’t leave a lasting impression.