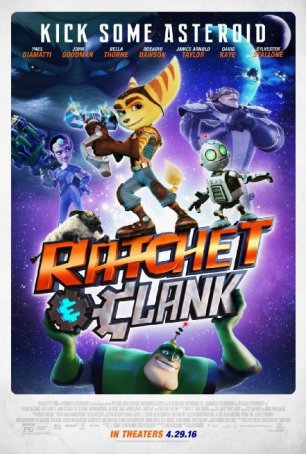 Generic animated cash-grab.  It’s hard to think of a more appropriate phrase to describe Ratchet and Clank, the video game-based movie being dumped unceremoniously into theaters for what will probably amount to a one-week run. (Tepid box office combined with the staying power of The Jungle Book and the arrival of Captain America: Civil War will quickly force it out of auditoriums.) In an era when many animated filmmakers are attempting to do “more” with their productions, the creative team behind Ratchet and Clank (which includes Sony Playstation) have been content to churn out a medium-budget cartoon that would have been better aimed at the direct-to-video market. The level of quality is such that this does not deserve a theatrical distribution and will only find appeal among pre-teen kids or those who have been fans of the games since their inception more than a decade ago.

Not having played any of the numerous Ratchet and Clank iterations, I can’t vouch for the film’s faithfulness to its source material. The production looks like a high-end video game and unfolds like one - lots of flashy action sequences and a serviceable plot that would have been more interesting if it had been interactive. In fact, one notable problem with Ratchet and Clank is the lack of depth. No, I don’t yearn for resonant drama or exceptional character interaction in a video game movie but I expect to be entertained. Large stretches of Ratchet and Clank bored me. That’s not a ringing endorsement for a movie whose entire existence is predicated on being fun.

For a video game or TV show, the animation in Ratchet and Clank would be considered strong. For a motion picture, however, it’s underwhelming. Back in the 1990s, when animation began the transition from hand-drawn to computer-generated images, there was apprehension that the format would “lose its soul.” For the most part, that hasn’t happened, but Ratchet and Clank illustrates why the concern existed. The film’s visuals are clean and technically proficient but they lack the detail and nuance that allows Pixar/Disney (and many other big-budget productions) to impress. The world of Ratchet and Clank doesn’t seem lived-in.

The story is a strange blending of The Incredibles, Guardians of the Galaxy, and Despicable Me. In this futuristic galaxy, life is safeguarded by The Galactic Rangers - Captain Qwark (voice of Jim Ward), Cora (Bella Thorne), Brax (Dean Redman), and support member Elaris (Rosario Dawson). When an “opening” for a new Ranger is advertised, there’s no shortage of applicants. These include Lombat mechanic Ratchet (James Arnold Taylor) and escaped mini-robot Clank (David Kaye). Although initially rejected, Ratchet later proves his worth and he and Clank are allowed to join the team. Their sudden celebrity rubs Captain Qwark the wrong way (he’s used to getting all the attention) and he joins forces with the villainous Chairman Drek (Paul Giamatti), his monstrous sidekick Victor Von Ion (Sylvester Stallone), and the insane Doctor Nefarious (Armin Shimerman). Their plot, which The Galactic Guardians must foil, involves destroying planets and taking pieces of their remains to form an all-new “perfect” world.

The only area in which Ratchet and Clank excels is voice casting. By blending some of the original voice actors from the games (including James Arnold Taylor, David Kaye, Jim Ward, and Armin Shimerman) with higher-profile personalities (Sylvester Stallone, Paul Giamatti, Bella Thorne, Rosario Dawson, John Goodman), the film retains a degree of familiarity for fans while achieving “name recognition” for general audiences. Unfortunately, animated movies need more than solid vocal performances to succeed.

The parody elements of Ratchet and Clank show promise but, by disposing of subtlety in order to reach a younger audience and focusing on one-liners, the film never achieves depth to its satire. It’s not that this sort of thing is impossible - Pixar has achieved it several times, most similarly in The Incredibles - but the script is unwilling to go deeper than it needs to. Ratchet and Clank exists not to entertain audiences but to provide a marketing hook for the game series. This is, in effect, a 90-minute commercial, and it’s about as entertaining as one might reasonably expect from such a thing.