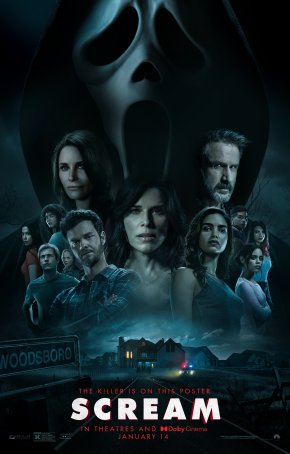 One reason why Wes Craven’s 1996 slasher film, Scream, met with success was that Craven (and screenwriter Kevin Williamson) found a way to enliven things by incorporating a tongue-and-cheek “meta” aspect to the proceedings. In the course of telling its story, Scream overtly referenced past slasher films, including providing a recitation of certain “rules” of the genre. This wasn’t Craven’s first venture into “meta” horror; it was an expansion of some of the ideas he had previously toyed with in Wes Craven’s New Nightmare.

The central conceit worked well enough in Scream and Scream 2 but, by the time of the final leg of the trilogy, it had worn out is welcome, devolving from being original to derivative. Scream 3 was disappointing and represent a nadir…until an ill-advised 2011 exhumation that was greeted with resounding indifference by the public. The decision to make a fourth sequel (which is part-reboot/part-continuation, or as it’s called in the movie, a “re-quel”) seems poorly motivated from both a creative and financial perspective. Nostalgia may generate some interest but, for the most part, the movie falls into the category of “old franchises that no one really cares about anymore.” Check out the returns for Ghostbusters: Afterlife and The Matrix Resurrections. (Halloween is an outlier, due in part to that series’ peculiar alchemy and the Midas Touch of Blumhouse.)

To work, Scream (5) would have needed better writing than it has. James Vanderbilt and Guy Busick cobble together a story riddled with holes and inconsistencies. The characters are plastic – it’s tough to care about any of the new ones and the returning figures feel like they have been shoehorned in. The slasher elements are effectively gory, but bloodletting for bloodletting’s sake isn’t as enjoyable as it once was. The 2022 film also doubles-down on the “meta” elements, trying too hard to create hip layers. A little of this sort of thing goes a long way and there’s so much of it in the new Scream that it interferes with the viewer’s ability to suspend disbelief. It’s almost like having a running MS3K-type commentary in the background. 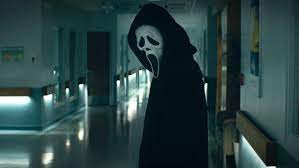 Events in the fifth Scream movie transpire a quarter century after those of the first. In the sleepy town of Woodsboro, high school student Tara Carpenter (Jenna Ortega) is home alone when a creepy telephone caller asks if she wants to play a game. The homage to Scream’s memorable prologue plays out pretty much as expected, although Tara survives the attack. But Ghostface (whose voice is once again provided by Roger L. Jackson) isn’t done. As Tara’s estranged sister, Sam (Melissa Barrera), and Sam’s boyfriend, Richie (Jack Quaid), jump in the car and head for Woodsboro, the murderous rampage continues.

Recognizing the connection between events 25 years ago and those of today, Sam and Richie start searching for suspects, beginning with Tara’s close friends and applying the horror movie “rules.” Feeling out of their depth, they go for expert help – finding it in the trailer home of burnt-out ex-cop Dewey Riley (David Arquette). It doesn’t take long before both Gale Weathers (Courtney Cox) and Sidney Prescott (Neve Campbell), are drawn back into Ghostface’s web. Faced with a mounting body count and emerging connections with the past, the new generation of protagonists and the returning characters seek to stop the new killer before having their entrails spilled.

From the beginning, there’s a sense that the unmasking of Ghostface and disclosure of his/her plan is going to be a letdown (as was the case with the other Scream movies), but it’s even worse than expected. It’s a silly, bogus revelation that, although intended to poke fun at extreme fandom, isn’t nearly as clever as the filmmakers think it is. Even steeped in the unreality of the slasher genre, it feels artificial and takes the “meta” concept too far. 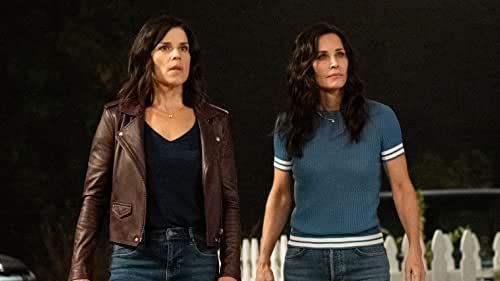 The screenplay is constructed like a jigsaw puzzle in the way it tries to combine legacy characters, franchise milestones, easter eggs, and an entirely new roster of younger players into a semi-coherent whole. It’s hard to lose oneself in the story with all these elements percolating. It feels like fan fiction (something openly referenced in one of the “meta” moments). And, for those hoping for a return to glory for the older, wiser Scream trio, it doesn’t really happen. Instead, we’re reminded of Danny Glover’s immortal line from the Lethal Weapon movies: “I’m too old for this shit.”

The newcomers are a mixed bag, and none has the same degree of appeal as their 1996 counterparts. Melissa Barrera, whose resume includes a lot of Mexican TV and a showy role in last year’s In the Heights, isn’t very good. This is especially evident when she’s in scenes with the more emotive Jenny Ortega or Jack Quaid. It’s saying something (not necessarily good) when David Arquette gives hands-down the best performance in the film. The other two Scream stalwarts, Neve Campbell and Courtney Cox, phone it in. They’re less animated than the ghost of Harold Ramis in Ghostbusters: Afterlife.

If Scream is intended to re-start the franchise, things are off to a rocky start. This is what happens when Hollywood refuses to give up on a series that has run its course. We see it over and over again, from Alien to The Matrix to Scream. The misses far outweigh the hits and when an old property achieves new life, it’s because of better creative decisions than the ones made by the men and women behind the fifth Scream.