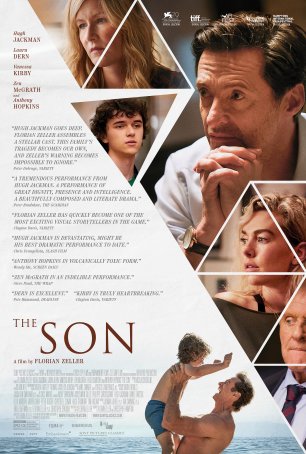 When one contemplates the amount of Oscar talent associated with The Son, the result can’t be considered anything less than a disappointment. A story of mental illness and the associated feelings of guilt and inadequacy visited upon the loved ones of the afflicted, the screenplay often seems to be on autopilot. And, although there are individually powerful scenes, the narrative arc feels contrived and there’s a scene near the end that is unforgivably manipulative (and completely unnecessary).

Nicholas (Zen McGrath) is the 17-year old son of divorced parents, Peter (Hugh Jackman) and Kate (Laura Dern). After discovering that Nicholas hasn’t been to school for the past month, Kate makes a panicked visit to Peter, who agrees to talk to their son. Nicholas tells his father that he would prefer to live with him; his partner, Beth (Vanessa Kirby); and their infant son. Peter, in part because of his workaholic lifestyle and in part because of lingering issues related to his own upbringing, is unable to connect with Nicholas and doesn’t know how to cope with what he perceives to be weakness. Kate and Peter, troubled by the belief that their break-up caused Nicholas’ problems, find themselves unable to make hard decisions where their son’s welfare is concerned, instead seeking ways to assuage their own guilt.

The ending of The Son feels pre-ordained; we’re on a dour train to inevitability. The moment someone mentions a “gun,” we know where the story is headed. The movie isn’t exploitative – it approaches mental illness with care but lacks the insight that characterized Florian Zeller’s previous collaboration with screenwriter Christopher Hampton, The Father (for which both shared a writing Oscar). Part of the problem may be that, while Zen McGrath is a capable young actor, he’s not in the same league as Anthony Hopkins, who was front-and-center in The Father. His limitations curtail the viewer’s ability to get into Nicholas’ head. We see what his parents can’t and their obtuseness, although not entirely unrealistic, is frustrating. 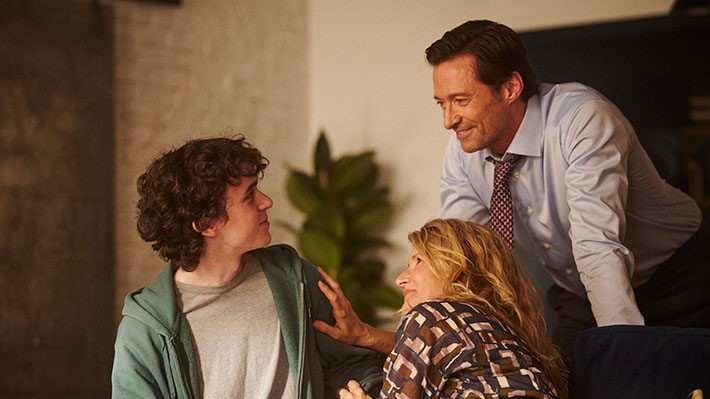 Hugh Jackman’s thoughtful performance – perhaps his best work since Prisoners – goes a long way toward retaining viewer interest. Our attention is drawn toward Peter and his conflicted reaction to his son – how he makes bad decisions and must cope with the consequences. The film’s standout scene features Jackman and Anthony Hopkins trading lines and is riveting not only for exposing why Peter is unable to be an effective advocate for Nicholas but for reminding viewers of how good Hopkins can be at portraying the face of evil.

For most of its running time, The Son is merely a well-made downer. It doesn’t say anything new (or especially interesting) about depression but there are little details, especially related to Peter’s inability to interacting meaningfully with Nicholas, that give the movie a compelling dramatic component. The ending, however, is marred by an unfortunate descent into overt and clumsy manipulation. An attentive viewer will suspect immediately what’s happening but that doesn’t absolve the filmmakers from this poorly motivated narrative choice. The Son would have been stronger without it; the scene belongs in a lesser movie made by a lesser director.

Given its pedigree, The Son arrives with Oscar aspirations. But it’s not its Father’s offspring in terms of insight or impact. This is one of those grim movies that requires viewers to endure the experience; however, instead of providing a worthwhile payoff, it never varies from the expected trajectory and leaves the viewer as cold at the end as the emotional temperature of the key relationships.