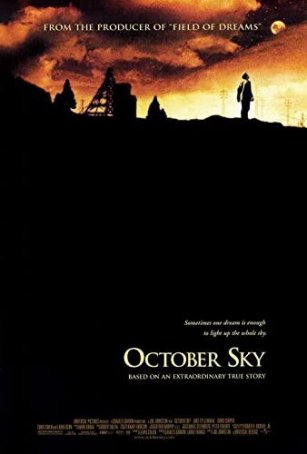 There are a number of ways one can categorize October Sky. My preference is to call it Varsity Blues for those who don't like athletics. And, while such a facile description threatens to reduce this movie to a plateau far below its worth, it nevertheless captures October Sky's essence: that no path in life which leads to something rewarding is easily traversed. However, while the two films display certain key similarities, the differences define the gulf between their relative quality levels Varsity Blues is cartoonish, obvious, and only occasionally smart. October Sky, on the other hand, is believable, subtle, and consistently intelligent. The over-the-top villain played by John Voight is replaced by a three-dimensional character essayed by Lone Star’s Chris Cooper. In short, October Sky is perfect fare for those who crave the ideas presented in Varsity Blues without the baggage.

There has always been a distinction between high school nerds and jocks. Those in the former category are on the chess club, play Dungeons & Dragons, and participate in academic contests, while those in the latter are guided by testosterone, muscles, and not much else. Jocks look forward to winning the big championship game and being scouted by college coaches. Nerds hope to score a 1600 on their SATs or take first prize at a national science fair, thereby attracting a university's attention. Things haven't changed much since the late '50s, the era in which October Sky is set. There's has always been a social dividing line between the grunts and the geeks, and it's very much in evidence here.

October Sky is based on the book by Homer Hickam, and relates the true story of four boys who experimented with homemade rockets during the autumn of 1957, the year that the Soviet satellite Sputnik blasted into orbit. Set in the coal mining town of Coalwood, West Virginia, this movie is about one boy's struggles to escape from a lifestyle that he views as an unsafe and unhealthy prison, and to pursue a dream that is born on the night when he gazes at a star-filled sky and sees the moving object that man put there. There's a wonder in that scene designed to remind us how majestic the idea of going into space once was. 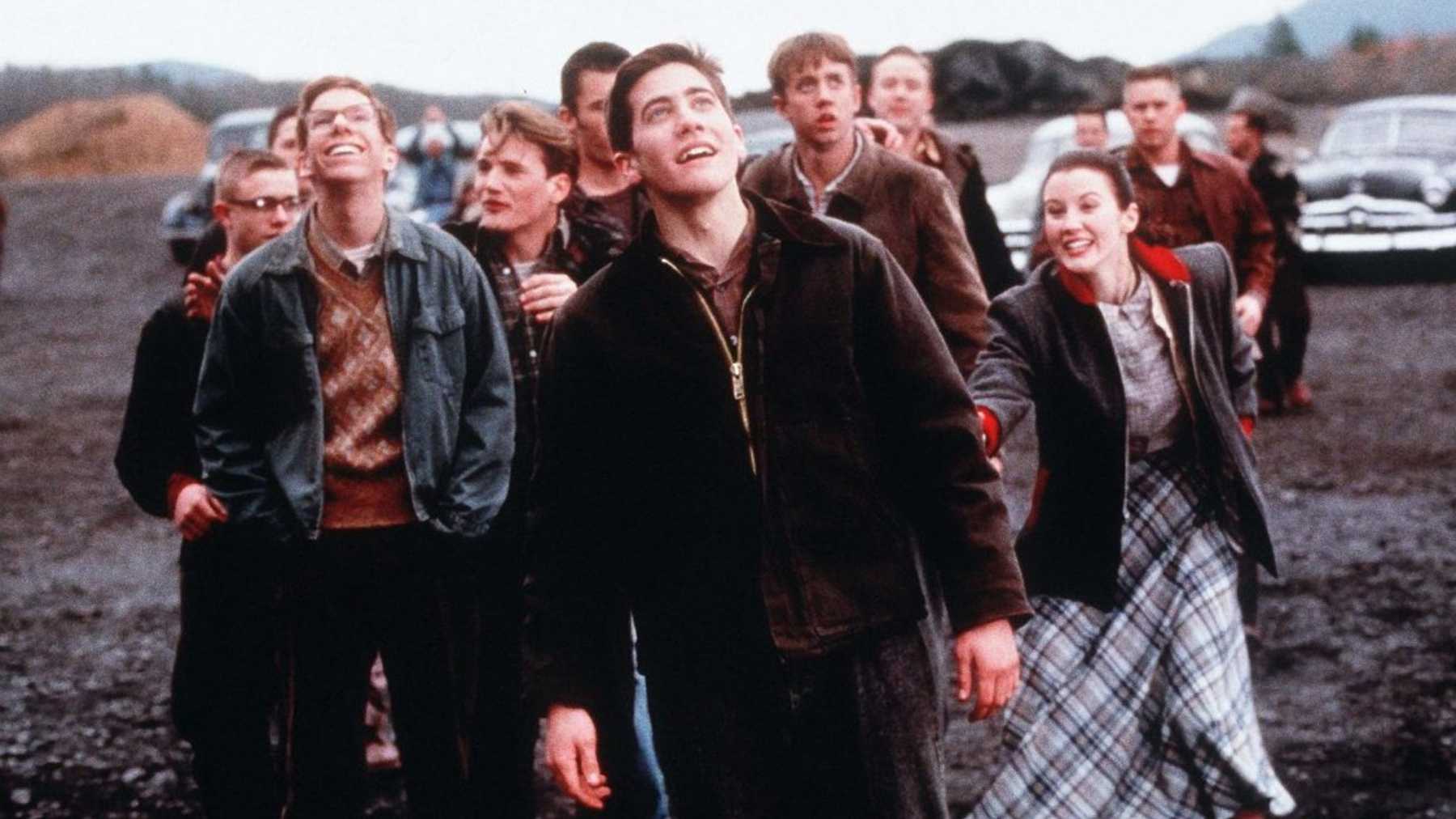 Homer (Jake Gyllenhaal), along with his three friends, Quentin (Chris Owen), Roy Lee (William Lee Scott), and O'Dell (Chad Lindberg), is determined to make a rocket that will soar. His primary adult ally in the endeavor is his teacher, Miss Riley (Laura Dern), who supports and encourages his dream. But his father, John (Chris Cooper), who runs the local coal mine, dismisses his son's avocation as foolish. He wants Homer to follow in his footsteps. Football and mining are acceptable; hoping to get into college by winning a national science fair is a waste of time and effort. Indeed, for a while, it looks like all of Homer's efforts are doomed to failure as rocket after rocket explodes on the launch pad, but, when the four boys discover the secret to success, they become local celebrities - until one of their rockets is suspected of starting a forest fire. And, when an accident at the mine threatens to ruin Homer's family, the idealist must choose between preserving his dream and working to allow his parents to keep their home.

There are a lot of reasons to like October Sky, but the most compelling is the multi-faceted, complex relationship between Homer and John. This isn't the kind of one-dimensional interaction we have come to expect from movie fathers and sons; it's characterized on both sides by anger, jealousy, resentment, bitterness, respect, pride, and love. These two individuals act and react in a convincing fashion, not the way a screenwriter's constructs often do. While at first it appears that the rocket building lies at the movie's heart, we gradually realize that the connection between Homer and his father is more important. 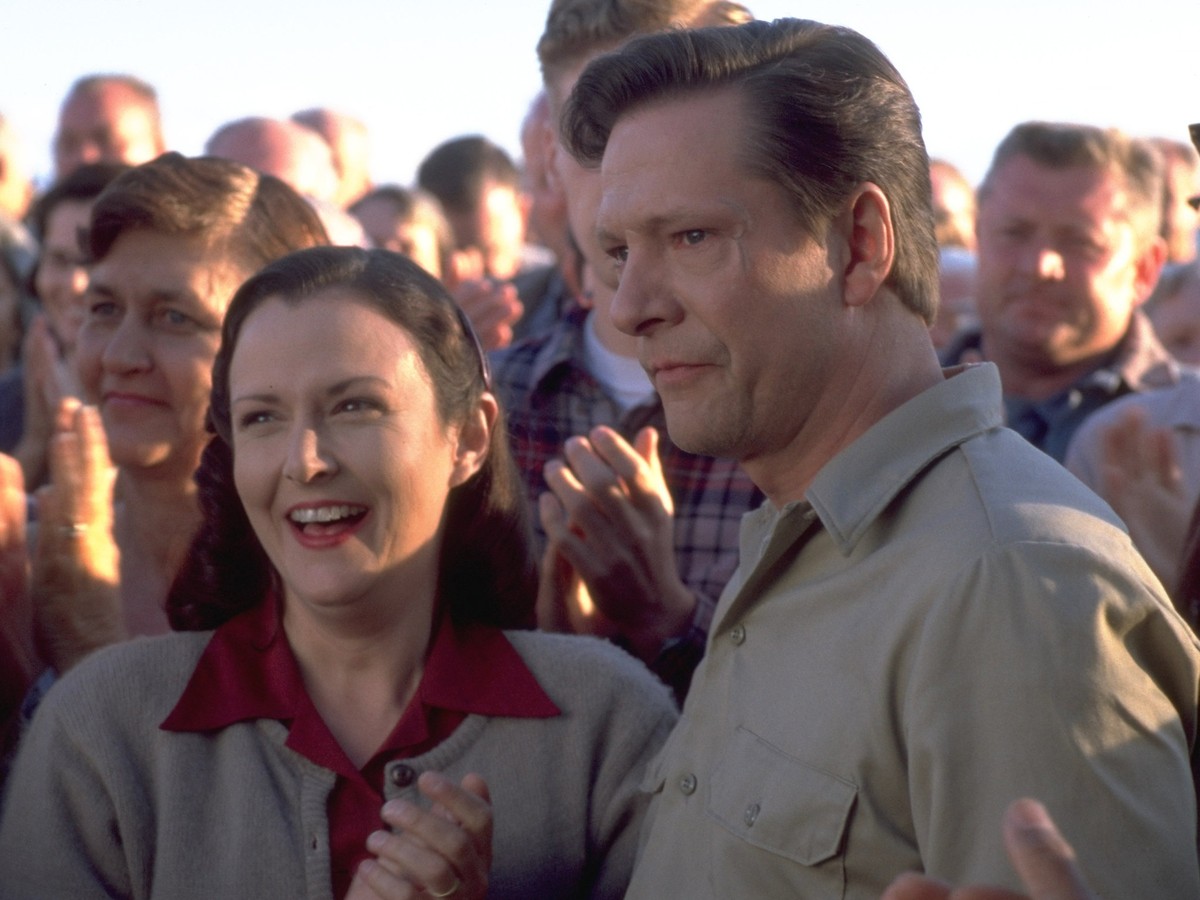 October Sky gets a lot of the details right. With its use of period costumes and accessories, the film has the proper look for the late-1950s, and the soundtrack contains numerous pop hits from the time. The pervasive atmosphere of grimy grayness emphasizes that the action is taking place in a coal mining town. And, in a nice touch, at the end of the movie, during the "where are they now" segment, we are shown home movies of the real individuals whose lives are portrayed here (some of the actors are surprisingly close matches). Aside from Chris Cooper, who is excellent, and Laura Dern, who doesn't have a large role, the cast is largely comprised of lesser-known performers. The one with the most exposure is Jake Gyllenhaal, who proves himself more than capable of handling the emotional complexity of this role. He is ably supported by Chris Owen, William Lee Scott, and Chad Lindberg.

As good as it is, October Sky proved to be a hard sell for Universal Pictures. It's one of those movies that doesn't lend itself to making a good trailer. With its lack of car chases, fist fights, and over-the-top melodrama, the film has to rely on solid acting, an intelligent script, and capable directing (by Joe Johnston), and those things don't come across in a 2-minute compilation of quick clips. October Sky deserves the chance to be seen and will not disappoint those who take it.