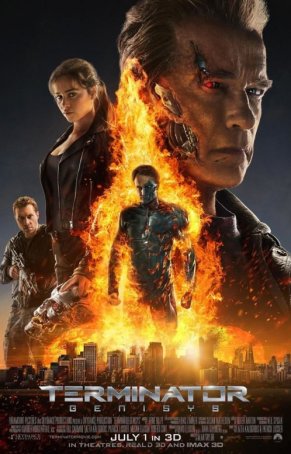 After not appearing in a Terminator film for 12 years, Arnold Schwarzenegger has returned to one of the roles that made him the biggest action star of the '80s and early '90s. Will anyone care? This is the seventh film Schwarzenegger has appeared in since his return to acting and none of the previous six has made a dent at the box office. The pundits are sure he's a dinosaur whose time has long since passed. Indeed, the actor's future as a leading man is almost certainly tied into the worldwide gross of Terminator Genisys.

The film does what many fans of the series are prepared to do: ignore the existence of Terminator 3 and Terminator Salvation. Those movies, while enjoyable on their own terms, added little to the core mythology. Terminator Genisys sets itself up as a direct sequel of The Terminator and T2: Judgment Day. As such, it hews close to the storyline established by James Cameron. In fact, the film is so closely aligned with the first two productions that it may be difficult to follow or appreciate without having seen them. Terminator Genisys feels like the film Cameron might have made if he continued the franchise. In fact, he did a little uncredited consulting and has become a part of the marketing campaign. Whether at his friend Schwarzenegger's behest or because he's genuinely enthusiastic about Terminator Genisys, Cameron has stated that this represents the "true" continuation of the series. 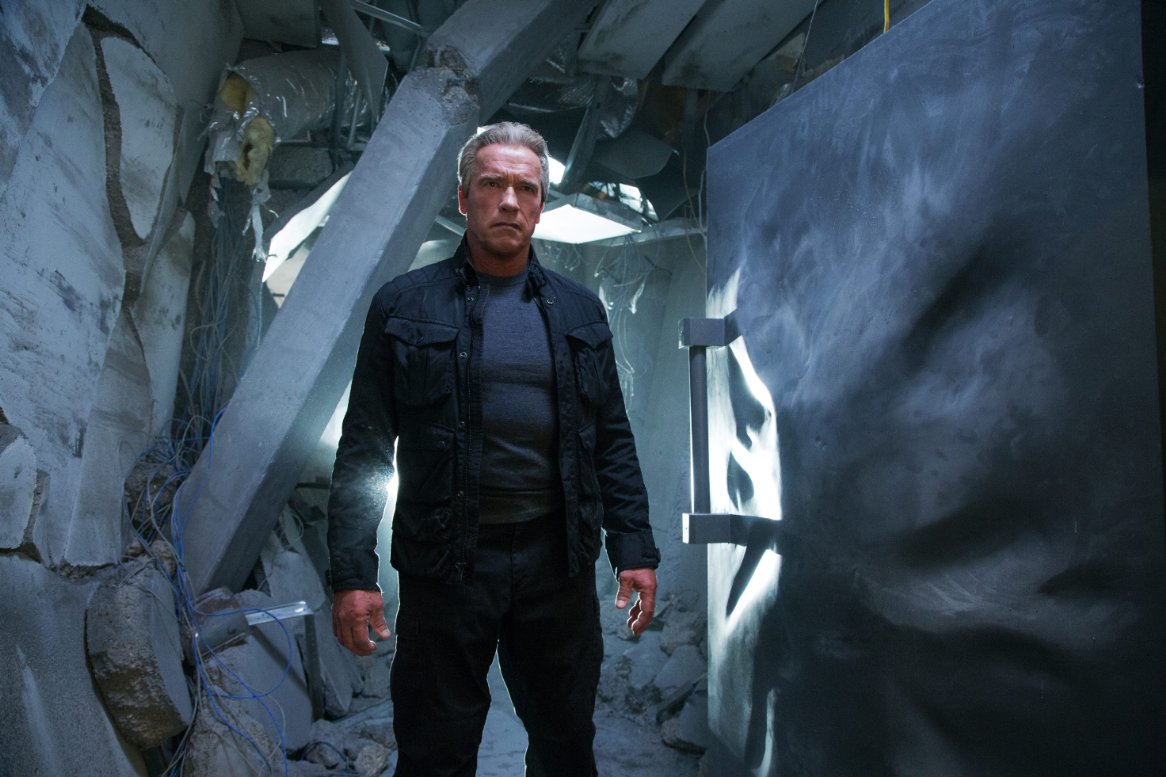 There's much to be enthused about in the way screenwriters Laeta Kalogridis & Patrick Lussier and director Alan Taylor choose to continue the story. Influenced both by Back to the Future 2 and J.J. Abrams' Star Trek reboot, the movie plays with time lines and alternate universes to establish its storyline. The film covers territory previous encountered in The Terminator and T2 but with some notable differences. Things start out as we remember them before going off-road. As always, the objective is the same: use events in the past to save the future. The film's handling of time travel is questionable. Its approach to paradoxes is inconsistent, evidencing more of a Doctor Who-flavored fantasy approach than a harder sci-fi one. Terminator Genisys jumps from era to era: the post-apocalyptic future where John Connor (Jason Clarke) rallies his troops for the final attack on Skynet; 1984, where Kyle Reese (Jai Courtney) lands in his quest to protect Sarah Connor (Emilia Clarke) from that attack of a T-800 (Schwarzenegger); and 2017, the new date of Judgment Day.

The style and tone are retro sci-fi action. It's like T2 only bigger and louder. There are plenty of fights, a few chases (thankfully none are too long), and a lot of heavy-duty special effects. A few of the robot-on-robot battles go on too long - there comes a time when this becomes tiresome. The best of these altercations comes early in the proceedings when a 40-year old Terminator takes on his younger self. The complex process of creating an animated de-aged Schwarzenegger is remarkable: this is the first time we've seen something quite like this. It looks as if the filmmakers used footage from The Terminator but that's apparently not the case. The visuals are impressive (although the 3-D is a useless distraction) and Brad Fiedel's signature score gets to shine at the right moments. 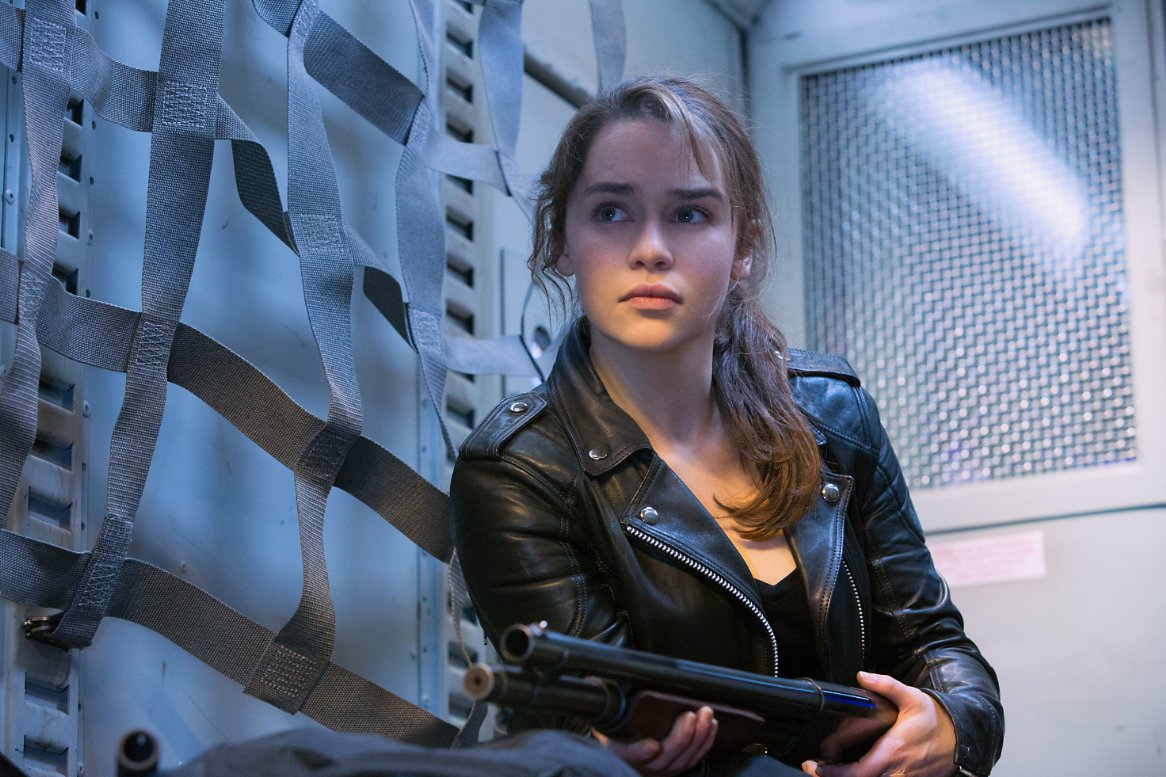 The best one-liners, like the best fight scenes, are reserved for Schwarzenegger.  It's too soon to tell whether Terminator Genisys will have a catch phrase like "I'll be back" or "Hasta la vista, baby" but there are several candidates. Much of the film's comedy results from The Terminator's failed attempts to emulate human behavior.

Marketing can be the filmmaker's best friend but it can also be an enemy. James Cameron discovered this when making T2. His intention was to keep The Terminator's allegiance a secret but the marketing department decided this was too good a nugget to pass up for public dissemination. History has repeated itself for Taylor. A key twist, intended to be kept under wraps until audiences discovered it for themselves, has appeared in the trailer, the poster, and other publicity devices.  I won't divulge it here but the revelation will have a greater impact for those unaware of it.

Terminator Genisys is blessed with an eclectic cast. Although Jason Clarke and Jai Courtney fall into the "lesser known" category, the same can't be said for the other major players. Schwarzenegger is, of course, an icon; even at age 67, he does many of his own stunts. Emilia Clarke embodies Sarah Connor perfectly, stepping seamlessly into Linda Hamilton's shoes and bringing along with her a legion of Game of Thrones aficionados. Her fan base is perhaps exceeded only by that of the former Doctor Who, Matt Smith, who has a small but critically important role. Finally, there's an Oscar winner on hand, although it would be fair to say that J.K. Simmons is underused.

Terminator Genisys isn't going to convert anyone. Those who don't like or don't understand the franchise aren't going to start singing its praises.  This was made for those who loved James Cameron's inaugural episodes but may have strayed in the past 24 years. Like Jurassic World, it relies heavily on nostalgia. For what it is, it delivers. It's hard to imagine any other Terminator story doing a better job of reuniting us with familiar characters in a reality that, as is always the case when time travel is involved, isn't quite what we're used to. For those who felt the series had long ago grown old and run out of gas, Terminator Genisys proves there are more than fumes left in the tank. And, although the ending offers the possibility of a sequel, it doesn't demand one.

Now comes Judgment Day - not in the movie, but for it.