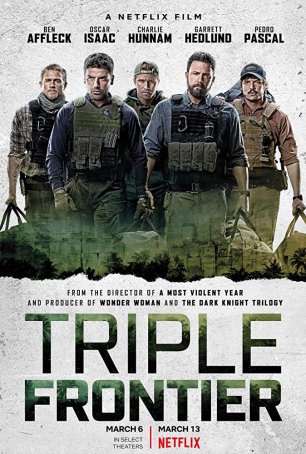 With today’s cinematic focus squarely on gender-balanced films, it almost feels odd to encounter something so testosterone-driven. Nevertheless, Triple Frontier is less a shrine to masculinity than a callback to the themes embraced by the John Huston/Humphrey Bogart classic, The Treasure of the Sierra Madre. An unconventional heist film in which a majority of the action occurs after the loot has been liberated, Triple Frontier features impeccable photography, strong acting, and well-staged action scenes that ooze tension. Director J.C. Chandor (Margin Call, All is Lost) has crafted one of Netflix’s better direct-to-streaming offerings to-date.

Triple Frontier gathers together a group of five elite ex-military men to pull off a daring heist in the middle of the South American jungle. The leader of the mercenary group is Santiago “Pope” Garcia (Oscar Isaac), a mercenary-for-hire who has done the necessary groundwork and planning. He is joined by William “Ironhead” Miller (Charlie Hunnam), who currently gives “tell it like it is” motivational speeches to new recruits; the down-on-his-luck Tom “Redfly” Davis (Ben Affleck), whose initial reluctance melts away when he sees how much money is involved; Ben Miller (Garrett Hedlund), Ironhead’s younger brother; and Francisco “Catfish” Mor (Pedro Pascal), a pilot who’s currently grounded due to involvement in cocaine smuggling. Their target is the drug lord Lorea (Reynaldo Gallegos), who keeps his entire stockpile of cash in a well-guarded, out-of-the-way mansion. 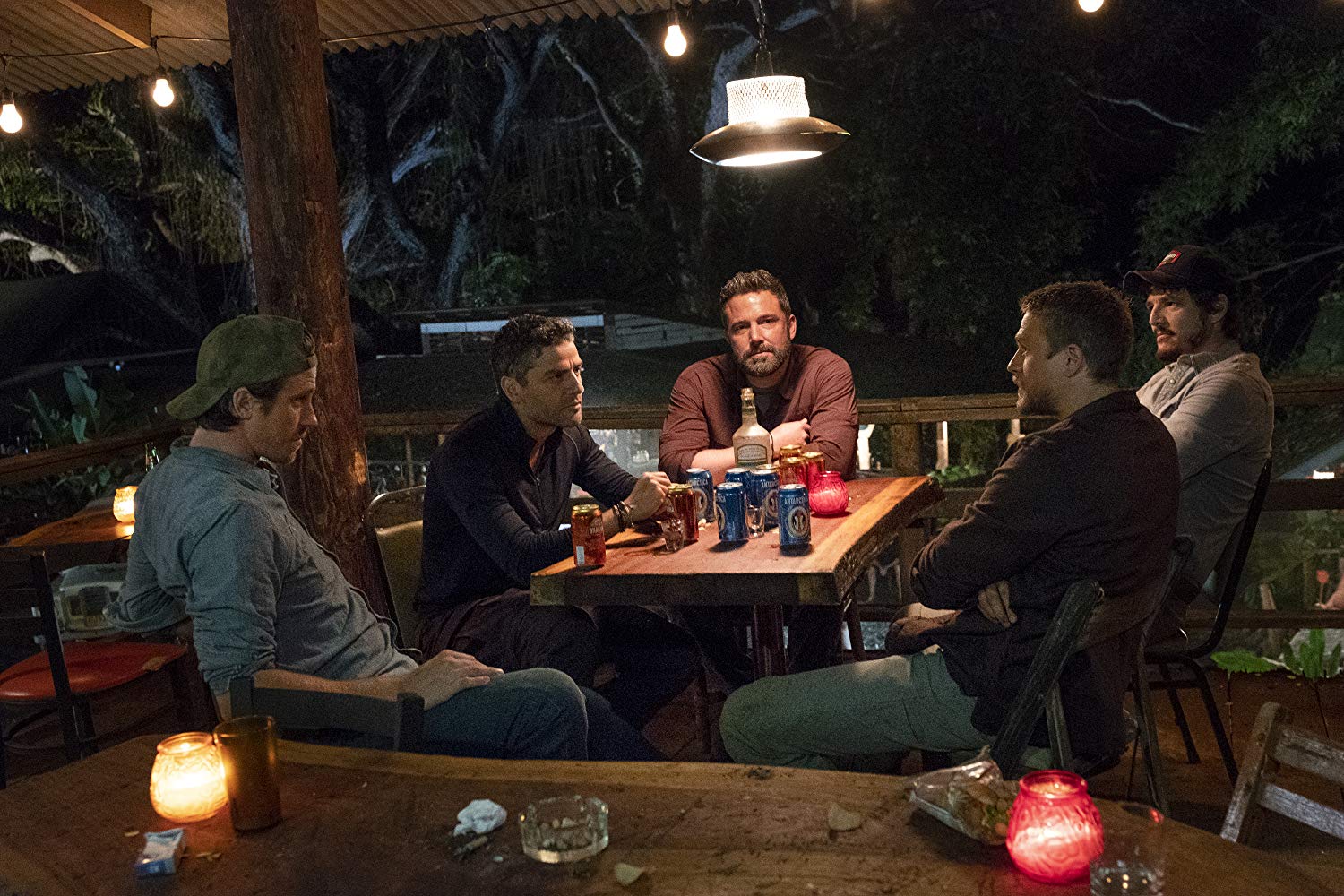 The film’s first half hour suffers from some pacing problems as it goes through the obligatory process of assembling the team. The planning and execution of the robbery are handled economically, leaving the movie with well over an hour to navigate its most compelling series of events: getting out of the wilderness with dozens of bags of cash. Stealing the loot proves to be the easy part. Transporting it by van, helicopter, mule, and on foot makes the men easy targets and the friction within the group puts them in greater danger. Chandor understands how to ratchet up the suspense and tension with each new obstacle.

The Treasure of the Sierra Madre explored the corrupting influence of greed as it caused otherwise decent men to act violently and irrationality in pursuit of gold. Triple Frontier is cast from the same mold with paranoia and avarice obliging the members of Pope’s handpicked group to be impulsive, incautious, and at times downright stupid. They don’t stick to the plan, are sloppy and careless in its aftermath, and begin to fight among themselves as bits and pieces of their humanity slip away. They go into the mission anticipating only one death (Lorea). The mounting body count is a testimony to how badly they have misjudged the situation.

A secondary theme in Triple Frontier relates to how inadequately soldiers are treated by the military once their primary usefulness is at an end. Pope works as a gun for hire in foreign countries. Ben fills the role of the patsy in MMA matches, allowing himself to get beaten to a pulp. And Redfly’s financial woes are so deep that he has little choice but to join his old comrades. Chandor doesn’t belabor the point but it’s evident that the characters in this movie are collateral damage of a war machine that doesn’t take the human toll into account.

As always, Oscar Isaac gives a reliably strong performance, with Pope exuding a calm confidence that only begins to crack when things go badly wrong. Ben Affleck, having put on a few pounds (for this or Batman?), is credible as the world-weary Redfly. Pedro Pascal (The Equalizer 2) emerges from the group of supporting players to steal a few scenes; Catfish is a stock character who becomes something more due to the actor’s performance.  Adria Arjona is the only actress with significant screen time, although her role is neither well-developed nor clearly defined (she plays the insider who provides Pope with detailed plans of Lorea’s house and schedule).

Netflix’s mission statement is to provide subscribers with enough original content that they won’t be tempted to cancel the service. It spans the gamut from critically lauded fare like Roma to stories with strong mainstream appeal. Triple Frontier falls into the latter category. Despite its prominence on a streaming service, however, it has the look and feel of a motion picture – an indication that direct-to-streaming films are no longer segregated by low quality or a cheap aesthetic. The craftsmanship evident in Triple Frontier’s construction gives Netflix a claim to having one of the best movies released into the wasteland of 2019’s first quarter.